A royal ride: The Clydesdale is a working horse with high-class connections

For more than a century, it has captivated and carried many of the world’s power players

Originally bred as workhorses, Clydesdales are now emblems of extraordinary strength and unmatched style. It’s no wonder the majestic horses have such a long history with the upper crust. Whether it’s helping celebrate historic moments or carrying members of the royal family, the hard-working Clydesdale has played a range of undeniably regal roles throughout its history.

Fit for a Queen

The Clydesdale’s royal roots go back to the mid-18th century when James Hamilton, the sixth Duke of Hamilton, imported Flemish horses to cross with and improve local draft horses. Hamilton’s idea was a crucial step in developing the breed. More than 100 years later, Queen Victoria purchased her very own award-winning Clydesdale stallion, and Queen Elizabeth II is also a Clydesdale fan today. In the late 1990s, she spotted a colourful blue roan Clydesdale and was so impressed by its beauty that she commissioned it into service in the Queen’sHousehold Calvary.

The most famous Clydesdales are undoubtedly the Budweiser teams, and they got their start by making a very momentous delivery. It was 1933, and brewing company Anheuser-Busch had survived 13 years of prohibition when the law was finally repealed. Company executives and brothers August Busch Jr. and Adolphus Busch III decided to mark the occasion in style, presenting their father, August Sr., with a stunning hitch of six Clydesdales.

The Busch family quickly saw the magic in these horses and decided to use them for the ultimate celebratory delivery. In April 1933, a second team was hitched up and paraded down Pennsylvania Avenue to the White House to deliver the first case of post-prohibition Budweiser to President Roosevelt. Ever since, the Clydesdales have been an iconic part of the Budweiser brand. 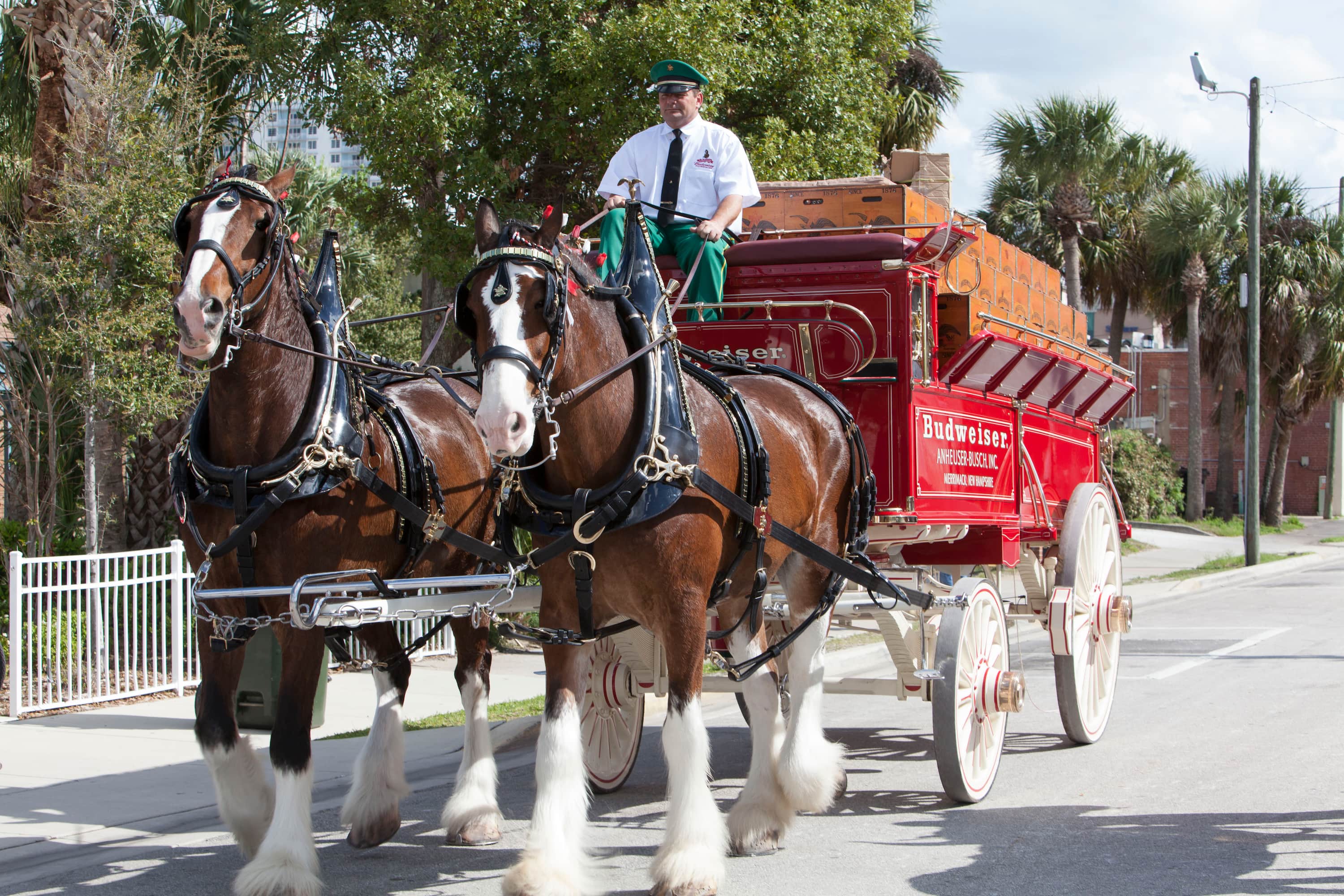 Today, the Budweiser Clydesdales are among the most elite horses in the world, and only the best 10 of the more than 40 raised by the brewer each year get tapped to pull the famous hitch. Parading in blinged-out solid brass and patent leather harnesses, the team dazzles crowds and brings stateliness to any procession.

So, it’s no surprise that the Budweiser Clydesdales still have presidential connections. They have been featured prominently at two inaugurations, parading at Harry Truman’s in 1949 and then again for Bill Clinton’s in 1993.

Of course, Christmas at the White House also calls for a Clydesdale’s festive presence. In more recent years, an enormous Christmas tree has been delivered to both the Trump and Obama families in a red and green wagon, pulled by none other than two beautifully adorned Clydesdales.

When royalty needs a lift, Clydesdales are a natural choice. Oklahoma’s Express Clydesdales are a champion black and white hitch that make special appearances all over North America. But in the summer of 2011, they carried their most prestigious passengers yet. Newlyweds Prince William and Kate, the Duchess of Cambridge, were chauffeured between events at the famed Calgary Stampede atop an antique coach pulled by the award-winning Express Clydesdale team.

The team’s manager, Josh Minshull, who drove the coach that day, believes Clydesdales bring the exact kind of pageantry called for by a job like this. “There’s something about their size and beauty that makes people just flock to them,” he says, proving that even when jeans and Stetson hats are the dress code, Clydesdales add a regal flair.

The U.K.’s most famous Clydesdale was a record-breaking star who caught the eye of the Queen’s Household Calvary. Weighing more than 2,000 pounds, Digger the Clydesdale was a massive 19.3 hands tall, standing nine feet from his hooves to the tips of his ears. In 2012, his extraordinary size earned him the title of the U.K.’s tallest horse, but it was Digger’s Cinderella story that really captured hearts. Orphaned at only a few weeks old, Digger had a tough start. His rapid growth brought health challenges, and the horse rescue organization World Horse Welfare had to step in to rehabilitate him. Luckily, Digger thrived and became an ambassador for this organization.

In 2010, the royals came calling to select Digger for the elite regiment of the Queen’s Household Cavalry. The goal was for Digger to carry the silver drums at Queen Elizabeth’s 2012 Diamond Jubilee celebrations, an extraordinary honour that would require 18 months of training.

Ultimately, Digger’s handlers realized that he was more suited to a quiet country life than the pomp and circumstance of serving royalty in the big city. Digger sadly passed away in 2017, but his legacy lives on as the famously king-sized Clyde with humble beginnings that caught the attention of the Queen’s cavalry.

A horse for all people

As Budweiser’s Clydesdale supervisor, Amy Trout, says, “They just turn heads. They are huge and beautiful, and when they come parading by you, it makes the hair stand up on the back of your neck.” What could be more royal than that?

For more about Clydesdales and the race to save them, watch Clydesdale: Saving the Greatest Horse on the documentary Channel.