5 of the most swoon-worthy cars, from 007’s hallowed hardtop to a moonshot sedan

These antique automotive classics were uncovered among a bewildering array of showpieces at a marquee California car auction.

Do you collect rare, outrageously priced antique cars? Me neither. For those who do, there are marquee classic car events held around the world, including the Bonhams Quail Lodge Auction. Held annually in conjunction with Monterey Car Week, it was a pit stop during the shooting of Drive: the Documentary from documentary Channel.

Antique car buffs praise Bonhams for its global reach and expert taste. And while rival auction houses like Sotheby's also flaunt their share of eye candy, Bonhams has a reputation for adding a little extra wow factor. Until recently, it held the record for the most expensive car ever sold at auction — a 1962 Ferrari 250 GTO Berlinetta, which went for $50.3 million.

If you’ve never been to a classic car auction, just imagine your typical show-and-shine, only on steroids. Thankfully, Bonhams was on hand to single out a shortlist of the most swoon-worthy among the 231 collectibles on the block.

This car has history, style and features to burn. A focus of top car manufacturers nowadays is to ensure safety and comfort. It wasn’t always so. Certainly not when the designers at Citroën were conceptualizing the SM. This was a period in French auto design when cars were built with mainly style in mind.

“Otherworldly” is how SM lovers and the motoring press like to describe it. Also, an automotive “moonshot.” At its unveiling, the SM — like its predecessor, the DS — mesmerized the world with its space-age design and magic-carpet hydropneumatic suspension. The suspension was powered with hydraulic fluid and resulted in a ride so impressively smooth Rolls-Royce licensed it for its Silver Shadow.

Citroën attempted to improve on the DS by making it go faster. In fact, the company so admired the engine-building acumen of Maserati, it bought the firm. Et voilà! French design meets Italian know-how. The net result was sizzling and streamlined. When it dropped at the prestigious Geneva International Motor Show in 1970, the press lost its mind. In 1972, MotorTrend named it car of the year.

Nobody builds cars like the SM anymore, and maybe they shouldn’t. In the end, the SM was as laughably impractical as it was irresistible. Its futuristic mechanics and the need for different types of specialists made upkeep expensive. Collectors like to joke SM stands for “sadomasochist.” 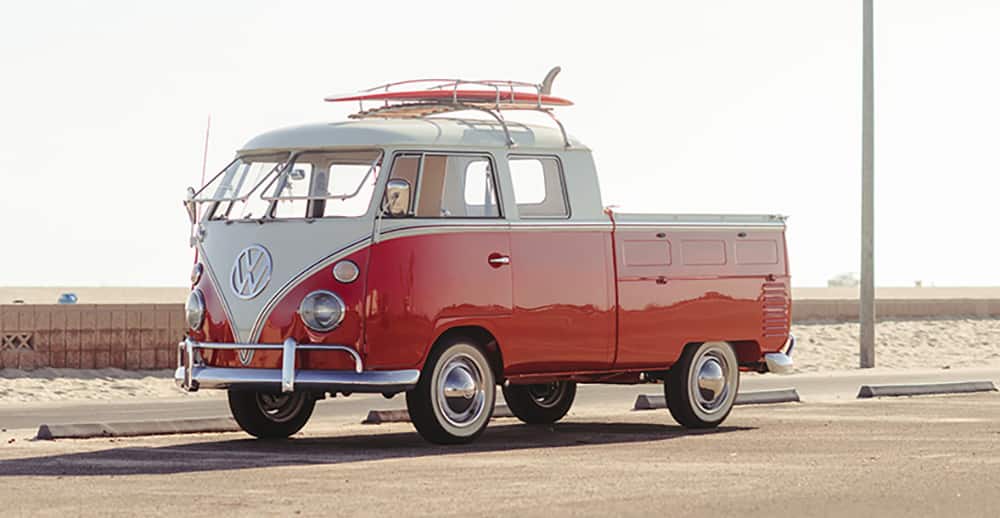 It’s possible you’re crazy for those iconic VW Buses so beloved by the flower power generation. Or maybe you’re tired of hearing how nostalgists and #vanlifers are dialing up their sticker price to unimaginable heights.

Here’s something the same, only different: a 1962 Volkswagen Dual Cab Transporter. The front half looks like the classic VW Microbus, while the back has this pickup thing going on. So what is it — a van or a truck? What’s with the indecision? Well, what’s wrong with a little of both?

Among the many lovely features of minivans like the VW is sitting up at the vehicle’s nose with the engine tucked safely in back. No nose between you and traffic makes for beautiful maneuverability in gridlock. And there’s cargo space in the back for your surf boards and camping gear.
There is another reason to choose this mullet-esque version over its popular cousin: affordability. Rarity usually translates into a higher price, except not in this case. This mint condition cab-over pickup went for a mere $69,000 on auction day. Restored VW vans have sold for as much as five times that. 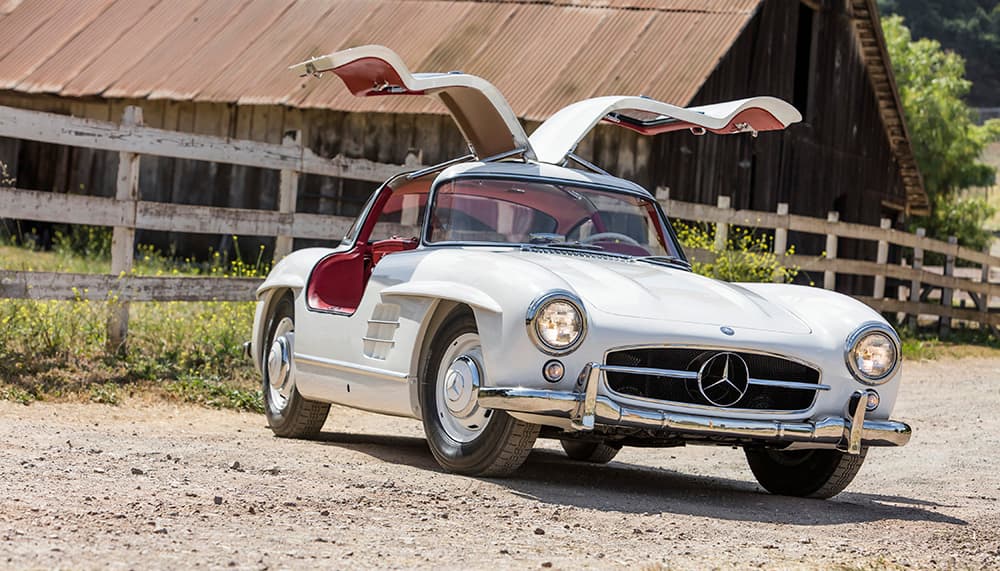 A showstopper reliably appearing on virtually every “greatest cars of all time” list, the 300 SL “Gullwing” coupe is the blue-chippiest of blue-chip collector cars. What, exactly, makes it so valued? That depends on your perspective.

When Mercedes unveiled the 300 SL in 1954, it was an instant smash. For some, it was all about aesthetics. In particular, the irresistible swoop of its top-hinged doors prompted racing car buffs to declare it a car that “looks fast standing still.” Meanwhile, its former life as a race car — it was built for the track before Mercedes adapted it for street use — sealed the deal for all the gearheads seeing it for the first time.

It was a hit with the wealthy and famous too. The shah of Iran, actress Sophia Loren and Pablo Picasso — among many other celebrities — drove Gullwing coupes. (The less coveted convertible 300 SL Roadster is a Trudeau family heirloom).

When Jaguar unveiled its first E-type at the Geneva auto show in 1961, members of the select guest list all but gasped. Both faster and cheaper than an Aston Martin or a Ferrari, it was the exaggerations of its contours that left its audience awestruck.

Enzo Ferrari, race driver and founder of the eponymous auto empire, declared it the most beautifully designed vehicle of all time.

Except “most beautiful” might not have been the first superlative on people’s minds. Something in its excesses — its elongated and bulbous hood — also earned it the title of “sexiest.” An object of desire in more than one sense.

The E-type roared off the assembly line as the swinging ‘60s were taking off and captured the decadence of the era. Two of the biggest sex symbols of the time, Brigitte Bardot and Steve McQueen, both owned one.

So it was by no mistake that the E-type would have a supporting role in Austin Powers: International Man of Mystery. Tricked out in Union Jack livery, Powers’ E-type was more a wingman on wheels than a mere prop. He referred to it as his "shaguar."

The silhouette also appealed to instincts more highbrow — in the realm of the great sculptures of the world. The E-type is one of a select group of cars to join the Museum of Modern Art’s design collection. 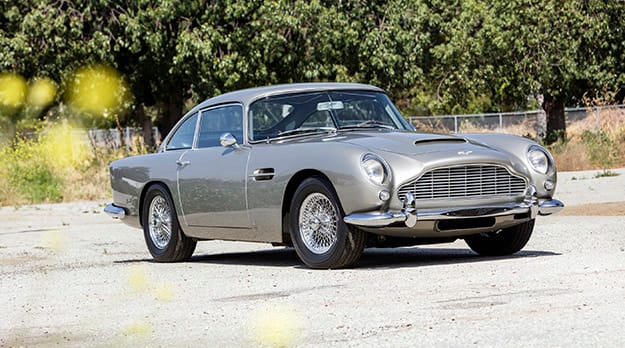 There isn’t much to say about 007’s main ride that hasn’t already been said. Mostly, it’s praised for its understated elegance. Beyond that, it’s luxurious and accelerates like a bomb.

Would you ever guess — given James Bond’s reputation as a ladies’ man — the DB5 could almost be described as family-friendly, with room for four plus luggage? But it’s definitely not as roomy as a minivan and a lot pricier. This DB5 set its new owner back $1.1 million. The jaw-dropping price tag might have as much to do with cinematic cachet as performance.

As it turns out, the DB5 was not dramatically different from its predecessor, the DB4. This was by no means a bad thing. Both versions featured Carrozzeria Touring's Superleggera bodywork. The coachbuilder was an expert in hand-forming the lightweight aluminium panels that give vintage Aston Martins their charismatic shape.

What set the DB5 apart from the DB4 was the former’s star turn in 1964’s Goldfinger, among the most effective product placements in film history. Celebrity status made the DB5 one of the most coveted cars ever made — so much so Aston Martin has unveiled a replica of the Bond version. All yours for a mere $5.6 million.

All images courtesy of Bonhams.