'This is a grave site': Diving with a Purpose surfaces the history of the transatlantic slave trade

Beneath the waves lie the wrecks of slave ships and the remains of roughly two million Africans who died en route to a life of captivity. Diving with a Purpose works to honour their history 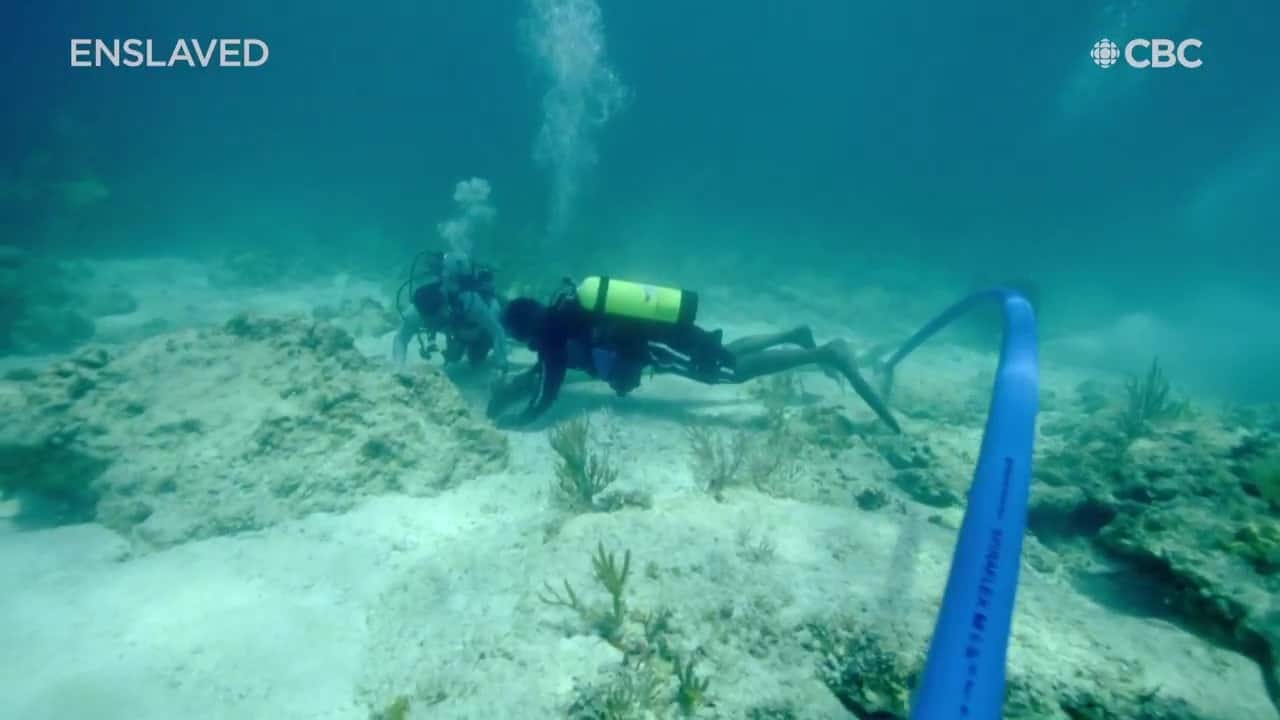 Searching for the Nimble

13 days ago
1:30
Off the coast of coast of Florida, the Diving with a Purpose team and marine archeologists from the National Parks Service go searching for two ships: the outlaw slave ship the Guerrero and the British Navy vessel the Nimble, both of which ran aground in a chase in 1827. 1:30

Although it was a phenomenon that lasted three centuries, which built the wealth of European countries and the United States, the transatlantic slave trade is often a blip in high school history lessons. How do we reckon with the record of mass displacement, loss of culture and human trafficking when most people in Canada and around the world know very little about it?

A new documentary called Enslaved grapples with some of these questions. Produced by and featuring Samuel L. Jackson, the series sees the actor tracing his ancestral past in Gabon, while scuba divers have the weighty task of unearthing lost histories by searching the wrecks of ships related to the transatlantic slave trade.

The divers come from an organization called Diving with a Purpose (DWP), which focuses on collecting, documenting and protecting artifacts from the shipwrecks. The series follows four divers — Kramer Wimberley, Alannah Vellacott, Kinga Philipps and Joshua Williams — as they explore sites in places ranging from the Caribbean to the Great Lakes to the English Channel.

DWP was founded in 2003 by a group of divers from the National Association of Black Scuba Divers. They believe it is crucial to document the wrecks before they disappear due to underwater erosion, damaging storms and looting. The data and artifacts collected from dives are used as educational resources to teach local communities the history beneath the waves.

Vellacott, a Bahamian marine ecologist who has been diving for 16 years, said Black divers have a responsibility to counteract the erasure of these stories by doing this archeological work themselves.

"No one is going to tell our history for us — not truthfully, not without white saviours," she said. "As Enslaved demonstrates, a lot of our history lies beneath the waves. If we do not retrieve our history ourselves, it will be 'discovered' and downplayed or be disregarded and continue to dissolve into nothing."

Of the over 12 million African people trafficked during the centuries of the transatlantic slave trade, roughly two million died en route. Their lives, stories and cultural practices were lost to the depths of the Atlantic. When the dive team came upon a wreck near Key West, Fla., Vellacott told them, "This is a grave site."

She remembered the visceral reaction she had the first time she hovered over the wreck of a ship that had sunk with African captives on board.

"It was almost like you could hear screaming," she said. "I generally love scuba diving. I feel at home, I feel at peace. But [with these dives], my heart was racing the entire time. It was almost like I was meeting face to face with a relative who I'd never known, whose story was never told, and they really wanted to share something with me. It was very, very moving."

Ancestry and lost identity are major themes in the series. Jackson, who grew up in Georgia, explores his Gabonese heritage — a heritage he, like so many Black Americans, was disconnected from because of the cultural erasure amid centuries of displacement and forced assimilation.

Kramer Wimberley, who is from New Jersey, is a lead instructor with DWP who has been diving since the late 1980s. He said he always tries to connect with the history of the wrecks and be aware of the severity of what he is encountering.

A lot of our history lies beneath the waves. If we do not retrieve our history ourselves, it will be 'discovered' and downplayed or be disregarded and continue to dissolve into nothing.- Allanah Vellacott, Diving with a Purpose

In the series, the divers visit civil rights leader and U.S. congressman John Lewis, who died in July, to get his blessing to construct a memorial in South Carolina's Charleston Harbour for the lives lost at sea during the transatlantic slave trade. They tell him about the dives and research they are working on and thank him for his dedication and sacrifice for the rights of Black Americans.

It was a pivotal and moving experience for the divers. Wimberley recalled meeting Lewis and the universal fight for justice they both shared.

"We are fighting to destroy a global system of white supremacy that allows Black people to be killed in the street, to be denied the right to live where we choose, to be denied access to an education, to be denied access to jobs," said Wimberley. "Sitting in his office, I recognized that our fight was the same and I could hear in his voice that 'good trouble,' his lifelong mantra, was an avenue to justice."

Another question the series poses is what do we do once we've learned these buried histories? Once they have risen from the depths of the Atlantic, how do we as a society move forward?

"The idea of holding some organizations or some countries accountable for having been complicit in the murder of millions of African people is too overwhelming for people to look at, confront and process, but we have to do it," said Wimberley.

The link between capitalism and racism is on display throughout the series. In one episode, as the divers are searching for a wreck from 1680 off the coast of Cornwall, U.K., they uncover an elephant tusk over 300 metres below the surface. Many slave ships carried ivory and gold along with humans, and often these materials were worth more than the human cargo. The team made the treacherous dive because the symbolic meaning of the ivory outweighed the risk. As Vellacott said in the episode, "That tusk is a symbol of the pillaging of Africa."

In Cornwall, Vellacott, who has a white British father and a Black Bahamian mother, felt she was straddling a thin line between both identities.

"I was walking the streets that my dad walked," she said. "I was in the town where my last name was from, but I was exploring my mother's ancestry. At the same time, I heard my mother's ancestors crying, but my father's ancestors laughing. It was difficult to think about because I was made out of love, but most [biracial children] back then would have been a product of rape."

These kinds of harsh realities make the series difficult to watch at times, and they can feel like reliving a sort of ancestral trauma. The director and production team kept the divers' emotional care in mind during shooting, focusing less on "getting the shot" and more on not exposing the dive team to too much emotional trauma, according to Velacott. Still, the gravity of the situation can't be escaped. Wimberley has been diving with DWP since 2008 and had been on countless dives before filming the series. He still grapples with the level of loss, but the necessity of uncovering this history motivates him to continue the work.

"As an African American man, my conditioning growing up was to always bury emotions and feelings, because they were weaknesses that someone could exploit," he said. "Working on this project forced me to address things that I had buried for a very long time.

"The emotions that always come out first are anger and rage, then sorrow and pain…. Then I recognized that my purpose is to bring attention to the anger, the rage, the sorrow, the pain and the fear of those Africans who were on that particular vessel. They are deserving of the attention. My purpose is to make sure that their story gets told, and hopefully during the process, I get some peace for myself."

Enslaved contains disturbing depictions of the inhumanity faced by enslaved people from African countries during the transatlantic slave trade, which may be traumatizing to some viewers. If you need support, there are resources available across the country, you can find links to a number of these resources in this post, curated by the Unison Benevolent Fund: https://www.unisonfund.ca/blog/post/mental-health-resources-black-canadians