‘Goats seem to be just a little more in touch with humans than some other types of livestock,’ says Kristen Holyoake

‘Goats seem to be just a little more in touch with humans than some other types of livestock.’

Kristen Holyoake, mother of three, just bought a 30-hectare farm in Bancroft, Ont. It has been a seven-year journey from a small corner lot in downtown Peterborough to the spacious new farm a little more than an hour away.

And how did she get there? Goats.

The documentary Year of the Goat follows a handful of farming families that love these hoofed mammals and have fostered a way of life around them. Among the oldest domesticated animals, their close relationship with humans goes back more than 10,000 years.

Goats can be many things: prized show animals, beloved backyard pets with sparkling personalities, useful farm stock that produce dairy products, or important life lessons for children — often, a mix of the above.

For Holyoake, goats were a big part of how she changed her life.

A DIY approach to health and nutrition

Holyoake, diagnosed with fibromyalgia and chronic fatigue syndrome, had lived with chronic pain for much of her life. She needed a change and started exploring alternative approaches to nutrition.

"I had really never … played around with diet until that point," Holyoake said. "And as I started to realize how much more I was affected by processed foods and chemicals and things that I hadn't really thought of in the past, I really wanted to be able to get away from a lot of that."

Buying only fresh and organic foods can be expensive, she pointed out, so she decided to grow her own.

In 2013, Holyoake bought a 22,000-square-foot plot of land just outside of Peterborough and planted a plentiful vegetable garden, which fed her family throughout the summer months, with a little left over for winter preserving. She also drove a school bus, a job that gave her hours of time during the day between morning and afternoon runs. And she started breeding goats. 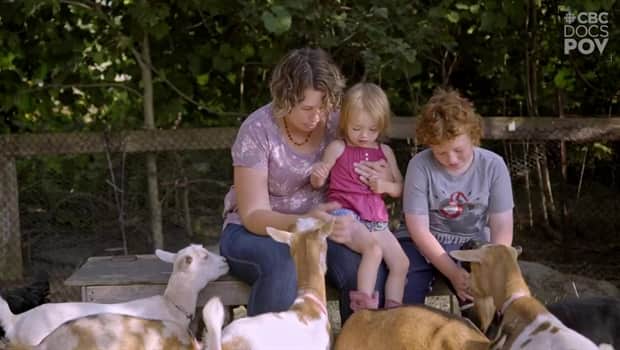 Year of the Goat: Family Goats

2 months agoVideo
1:03
Kristen Holyoake is raising her three children as a single mom, but also raising goats. She had a dream to be a homesteader and is raising animals with her kids to be more sustainable and give them a richer upbringing. 1:03

As Holyoake said in the documentary, "Goats seem to be just a little more in touch with humans than some other types of livestock."

Her hoofed herd fed her family with milk, yogurt and cheese, and she sold offspring for additional income. She brought her goats to fairs and entered shows; a normal summer season would have her family at shows almost every weekend.

In addition to providing a source of fresh food and income, Holyoake said the goats have been charming pets and important learning opportunities for her children.

"I think there's a huge benefit to kids learning how to do things for themselves and growing their own food and being a part of that whole process," Holyoake said. "It's not always easy. There's lots of tough parts. But there's a lot of life lessons in it."

Every day is different on a farm, Holyoake said. Sometimes her family focuses on weeding and harvesting vegetables; sometimes the barn needs a clean. But they have days off too. "It's not always work," she said.

Her three children — sons Logan and Griffin, 10 and seven years old, and daughter Ainsley, turning four in October — help feed and milk the goats, and they practice for the show ring.

Year of the Goat shows Logan presenting his handling skills and knowledge before judges. Now Holyoake's youngest is also keen for the competition.

"Ainsley loves to practice her goat showing throughout the day when I'm busy doing other things," she said.

One of the most special attributes about goats, Holyoake said, are the close bonds they can form with people: everyone in her family has that "one goat" that follows them around. But that connection also means her children have learned maturity in the face of disappointment and loss.

"We sometimes see the hard side of our pets. We end up having to make tough decisions or things happen, like accidents happen," Holyoake said. "For them to understand all of that early on makes healthier kids as far as dealing with emotions and things that kids need to learn."

There's a lot of work to be done on Holyoake's big new property.

Her partner posted a tour of the property on his YouTube homesteading channel, which attracted attention online. Holyoake bought a greenhouse and plans to heat it with an outdoor wood boiler for year-round growing. She's considering bringing on cows and pigs, tapping around 500 trees for maple syrup in the spring, opening a farmers market, and going fully off-grid with solar power. She hopes to post more videos on her partner's channel that follow her journey.

When she decided to take control of her health years ago, Holyoake ended up creating a sustainable lifestyle that's almost fully self-sufficient. She says one of the things that has surprised her the most about her journey is how satisfying it's been.

"I guess [there's the] reward of knowing that all of that hard work has paid off," she said. "It doesn't always go as planned. There are things that go wrong every day.... I'm pretty happy with how far I've come in a few short years."

Watch Year of the Goat on CBC Docs POV.