While Don struggles to find raccoon harmony, Dad, Manny, and Brian turn the tables on the Everlys. Taylor and Vern sheepishly pay Cynthia a visit in hope of striking a deal.

Brought to you in part by: 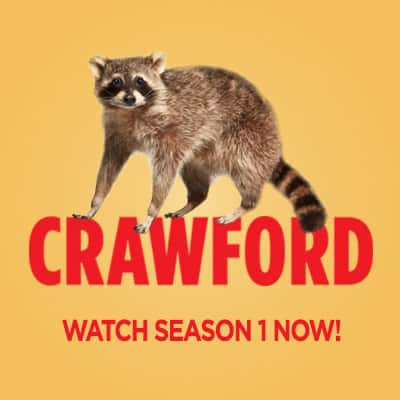 The world of Crawford is a familiar yet unusual one. When raccoons invade the world’s most functioning dysfunctional family’s home, they help breathe life and new meaning into the odd behaviours of the family. Jill Hennessy plays Cynthia (aka Mom), an award-winning cereal executive struggling to deal with the stress of juggling work with the needs of her husband, Owen, and her lover. John Carroll Lynch is cast as Owen, family patriarch and former police chief, who is unable to use his voice due to a medical condition and communicates via his smartphone. Kyle Mac is Don, “temporarily” crashing at his parents’ after being dropped by his music label. Much to his surprise, he soon finds his calling as a raccoon whisperer. Older sister Wendy, played by Alice Moran, and younger brother Brian, played by Daniel Davis Yang, aren’t too surprised by Don’s return and welcome him back—sort of—they have issues of their own. It’s weird, but in Crawford weird is the new normal.