You might not think that a show about a pair of middle age-ish men with arguable man-child tendencies and a somewhat fanatical devotion to their metal detecting hobby would be of any great value. But missing out on Detectorists on CBC Gem would be like missing out on a chest of hidden metallic treasure.

You might not think that a show about a pair of middle age-ish men with arguable man-child tendencies and a somewhat fanatical devotion to their metal detecting hobby would be of any great value. But missing out on Detectorists on CBC Gem would be like missing out on a chest of hidden metallic treasure.

Andy and Lance are two friends living in Danebury, a someplace in anyplace small-town England. Andy and Lance are detectorISTS – not, as they frequently remind anyone who gets it wrong, detectors. They search land with metal detectors as a hobby. Andy's day jobs come through a temp agency as he studies archeology. Lance drives a forklift.

As members of the Danebury Metal Detecting Club, Andy and Lance have a network of detectorist friends and enablers that they meet with on a regular basis to discuss their metal detecting finds and play at personal club politics.

Andy has a theory that a ship full of ancient Saxon treasure is buried somewhere on a local farm. Problem is, the farm owner isn't known to be very friendly to detectorists. And there's lingering local gossip that the owner has killed his wife and buried her body somewhere on the farm.

Never ones to shy away from a possible good metal detecting find, Andy and Lance manage to somewhat befriend the farm owner and get his permission to detect on the farm – as long as they stay away from one particular stand of trees.

Andy and Lance find mostly pieces of wire and rusted toy cars on the farm. But Andy insists, convinced by his studies and by people in his circle with similar interests, that there's something to his theory and that the ship is out there.

The plot thickens as Andy and Lance start to be regularly harassed by a pair of Simon and Garfunkel lookalikes – a resemblance that does not go unnoted by various characters in the show – who are members of a rival metal detecting club called the Antiquisearchers.

Detectorists is written and directed by Mackenzie Crook. Crook plays Andy, alongside Toby Jones' Lance. Both Crook and Jones are familiar faces. You might recognize Crook from Pirates of the Caribbean, Game of Thrones, or the U.K. version of The Office. Jones has appeared in the Captain America films as well as The Hunger Games and Doctor Who.

The series is beautifully shot, with a soothing soundtrack that lulls – and lures - viewers into the unexpectedly fascinating world of Andy, Lance, the Danebury Metal Detecting Club, and dreams of buried treasure. Detectorists won a 2015 British Academy Television Award – BAFTA - for television scripted comedy.

Season two of The Detectorists starts streaming December 4 on CBC Gem. For now, you can binge on season one. And we've dug up the the season 2 trailer for you.

Although Detectorists is fictional, the basic story behind the show isn't 100 per cent fantasy. In August this year, for example, a detectorist in the U.K. dug up a hoard of 1,000 silver coins on the grounds of a local pub.

If you want to dig even deeper into the world of detectorists and metal detecting, CBC Archives somewhat recently dug up a story from way back in 1982 about a real-life Canadian with a metal-detecting hobby. 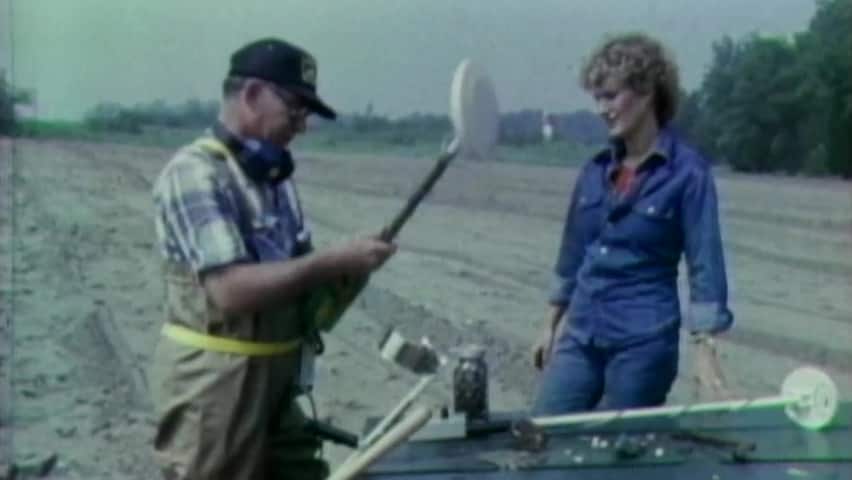 How to use a metal detector