2020 was nothing to laugh at, but we tried. Here's a recap of the best comedy highlights from a particularly low year.

If 2020 were a roller-coaster, it's one wild ride that even the most fearless want to get off.

This year has been a series of surprises none of us would have imagined, and it can be hard to find the humour in our situations. But as people adjust to the new reality that COVID-19 presents, laughter can be a key coping mechanism.

This year has been particularly rich in the comedy department. Although the pandemic shut down comedy clubs, comedians adjusted to online shows. Memes, stand-up specials and comedy TV series have been keeping our poor souls entertained and laughing. Here is a timeline of the best comedy highlights from a particularly low year.

The year was already off to a terrible start with many global natural disasters, tragedies, deaths, and regional conflicts in January. Bushfires were raging across Australia, a US drone hit Baghdad International Airport and took down the Iranian major general, a Ukranian plane was downed killing 176 people, and Kobe Bryant's tragic death are some of the tragic headlines in this first month.

COVID-19 had already spread in 25 countries, mostly in Asia, killing at least 213 people. The World Health Organization declared COVID-19 a global health emergency on January 30th. But there were also some moments of laughs that helped us get through it.  Chinese citizens under lockdown made memes and funny videos to cope with boredom. Some people poked fun at the lack of medical masks used to prevent the spread of the illness by posting alternative protective gear, including inflatable costumes, or sanitary pads, bras, and even fruit to protect their faces.

— The 2020 Golden Globes was a memorable night, with big wins for TV comedies Fleabag and Ramy. And you can't forget Ricky Gervais' bold monologue taking aim at Hollywood celebrities in a callout that felt real enough for the year we'd already been having. He brought in industry racism and scandals that are usually ignored at these kinds of events.

— Harry and Meghan left the royal family, and were contemplating a move to Canada. This Hour Has 22 Minutes visited, Sussex, the dairy capital of the Maritimes to see if it would be a good fit. The show also launched a petition trying to convince the couple.

On March 11, the World Health Organization called the coronavirus what it would be for months: A pandemic. Worldwide coronavirus cases hit 1 million at the beginning of April, and surpassed 4 million in May.

For comedy, this meant show cancellations on mass, including Netflix's First-Ever Comedy Festival, the Melbourne comedy, and even the Edinburgh fringe fest was in jeopardy. But comedy kicked into gear, finding a way to survive. Late night show hosts started audience-free productions, while comedians started doing outdoor comedy or comedy from home and Comedy clubs like Toronto's Second City started having virtual shows. The Office's John Krasinski did us a public service and started a positive Youtube series called Some Good News.

— Fundraising events like Stronger Together festival, and  "Comedy Gives Back COVID-19 Emergency Relief Fund,"  brought many comedians like Ryan Reynolds and Russell Peters and the cast of Schitt's Creek together.

— Comedians found creative ways to showcase comedy online, like New York-based comedian Sam Morril who sat inside his apartment, trying out his new material on his mom, calling it "Bombing Jokes For My Mom."

— The beginning of the "unprecedented" times meant a lot of celebrity videos: many pretentious ones offering "hope" from luxurious celebrity homes, but there were funny ones too, like Patton Oswalt performing from his balcony:

Watching the videos from Italy 🇮🇹 inspired me. Entertainers must offer hope &amp; humor to their neighbors in this time of quarantine. <a href="https://t.co/ohrsBtuqzu">pic.twitter.com/ohrsBtuqzu</a>

Oh but the memes!

Never have we seen so many public-health related memes than in the beginning of the pandemic. Anonymotif's Justin Trudeau Sings "Speaking Moistly" was one of the top viewed videos in Canada this year. Hand sanitizer became a meme with the "celebrities as things" trend. There were also toilet paper memes, and hand-washing memes, like the song lyrics hand-washing infographic, with many using the website Washyourlyrics.com. Dude Perfect's viral video Quarantine Stereotypes perfectly captured how we were feeling this month.

Comedians were even finding humour in the way coronavirus was being dealt with by the U.S. government. Sarah Cooper's lip-sync video of Trump at the White House Press conference went viral, and New York Comedian Vic DiBitetto rant about the US government's response was viewed more than 10 million times.

— Schitt's Creek: As many were stuck in tight quarters with their family in lockdown, the final season premiere of a heartwarming story of the Rose family stuck in a motel in a small town called Schitt's Creek resonated and brought a lot of laughs. 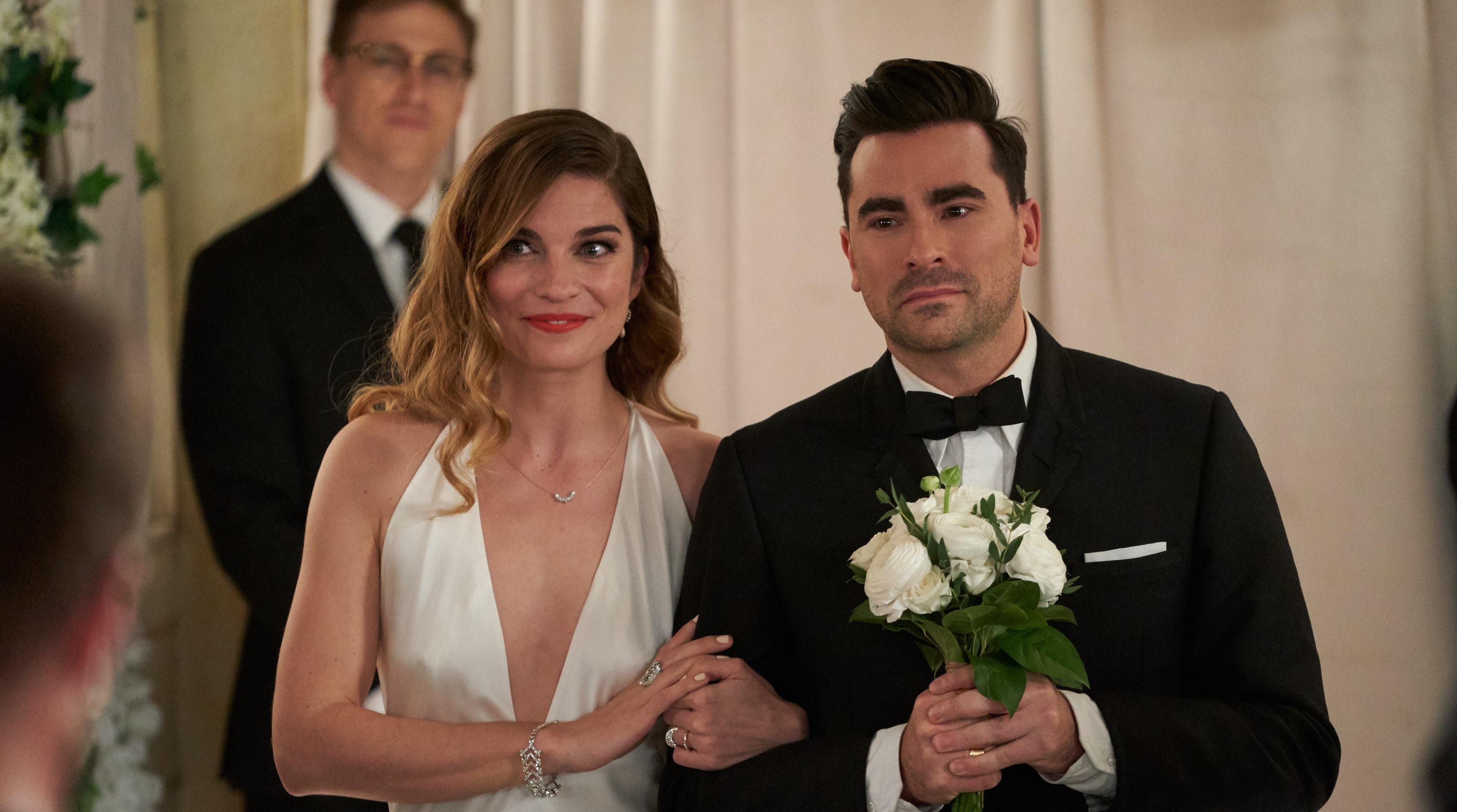 — Mindy Kaling's Netflix comedy series Never Have I Ever premiered on Netflix, starring a teen from Mississauga, Ontario.

The last weeks of spring were marked by protests across North America after George Floyd, an unarmed Black man, was killed during an encounter with police in Minneapolis on May 26th.

— On June 1, Trevor Noah delivered a powerful speech on racial injustice and on June 9, the hour-long return to The Daily Show, the show detailed numerous instances of police brutality in the two weeks since protests against police violence and racism erupted nationwide.

— Dave Chappelle's special by Netflix is a Joke entitled 8:46, was a half-hour part stand-up, part sermon, viewed 29 million times. The legendary comedian tackles police brutality and racial injustice in 2020 -- though they have long been subjects of his comedic work.

"This is not a Special but rather an impromptu purging of feelings and thoughts delivered by Dave during his show in Ohio on June 6, 2020," the channel Netflix Is A Joke stated.

— During a protest-filled summer, Ziwe Fumudoh took her YouTube show Baited With Ziwe, in which she features non-Black people and baits them into making unwitting racial faux pas, and made it a weekly Instagram Live comedy show. She had probing conversations on racism with guests like Caroline Calloway and Alison Roman.

— Cop comedy show Brooklyn Nine-Nine scrapped scripts for the first four episodes of season 8 and "started over" after George Floyd was killed in police custody.

It was a summer of Canadian comedy wins and celebrations. Schitt's Creek broke records winning every Emmy Award in the comedy section! Comedian Sophie Buddle made history as the first woman to win a Juno Award for Comedy Album of the Year for Lil bit of Buddle. Comedy Records, Canada's country's first record label dedicated to stand up and sketch comedy celebrated their 10th anniversary. Canadian Katherine Ryan's TV series The Duchess premieres on Netflix. During the summer, backyards and drive-ins became the new normal for live comedy across the country during COVID-19.

Across the border, Hannibal Buress released his special, Miami Nights for free on YouTube. He ended with a 20-minute story about an unsettling encounter with a police officer in Miami that led to his arrest. Internationally, an estimated 40 million people tune in to a tribute show for late Japanese comedian Ken Shimura who died from coronavirus.

We got to see more comedies filmed during the pandemic this fall. Borat came back with a sequel Borat Subsequent Moviefilm that tackles the coronavirus pandemic and other key 2020 issues. In Sarah Cooper: Everything is Fine, the comedian and Trump lip-synching sensation tackled politics and race  in a sketch special packed with celebrity guests like Megan Thee Stallion and Whoopi Goldberg. Shows like Connecting…, on NBC, and Social Distance, on Netflix, brought some lightness to our very real circumstances.

As the U.S. election came to a close, Canadian Jim Carrey aced his Joe Biden impressions on SNL, while 22 Minutes brought on new talent and crossed the border to cover it. After days of vote counting, Trump lost the election to Joe Biden and Kamala Harris, and SNL's skits and Dave Chappelle's monologue, and Full Frontal election edition "INSERT RESULTS HERE" (Sam Bee and Alana Harkin) helped mark the day after election results (or non-results).

— In November, record-high case counts in several Canadian provinces and a series of regionally-specific adjustments to public health restrictions including a second lockdown.

— Drug company Pfizer's Vaccine candidate was found to be more than 90% effective in preventing COVID-19.

As this year has shown, comedy is an excellent medium to make people happy, give us an escape, and bring people together even when we can't physically be together.