Whether you want to sample the plethora of ethnic cuisines, explore some of the churches, or wander through the bustling streets, this vibrant neighbourhood has it all. Tahiat Mahboob

Whether it’s the museums, the music, the festivals, or the food, Montreal has something for everyone. Each of its neighbourhoods is a destination unto itself, providing visitors with a chance to walk the streets, peruse the local shops, and soak up the general vibe of that area. While Old Montreal, Mile End, and Mount Royal are among the popular suggestions for those visiting, one neighbourhood that shouldn’t be overlooked is Parc-Extension — featured in the new documentary, Return to Park Ex.

More:
Return to Park Ex
5 Things You May Not Know About Montreal’s Park Ex Neighbourhood
Why Park-Ex, A Working Class Neighbourhood in Montreal, Is Such A Special Place

Nestled in the west end of the Villeray-St Michel-Park Extension borough, and right across the Boulevard de l'Acadie from the Town of Mont-Royal, Park Ex is one of Montreal’s most multi-cultural neighbourhoods. The City of Montreal founded Parc-Extension as a community in 1910 and in the 107 years since it has been a home to many — from Greeks, Italians, Eastern Europeans to Latinos, Africans and now predominantly South Asians. 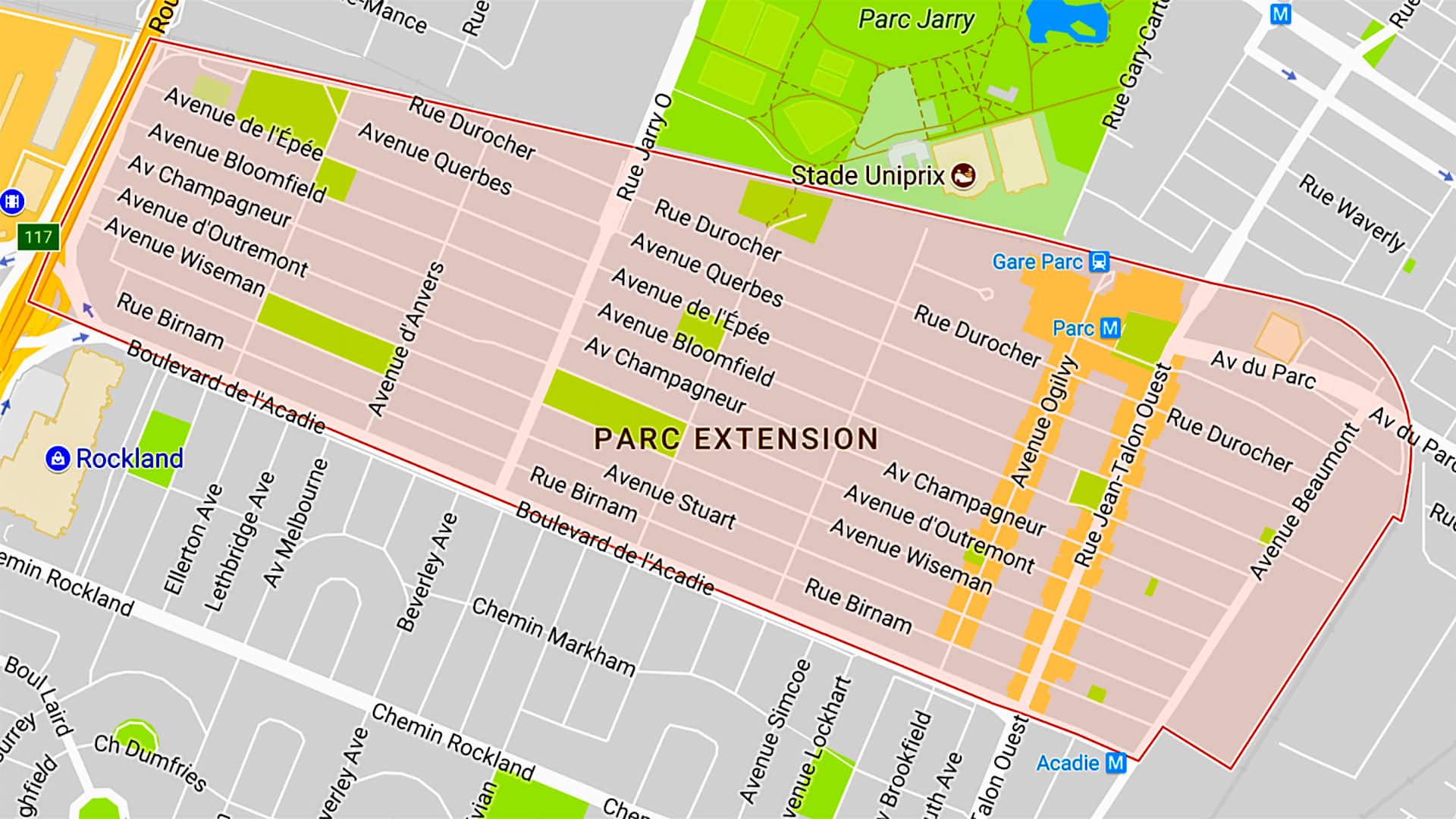 A map of the Park Extension neighbourhood in Montreal. Photo from Google Maps.

Stretching across nine avenues and over 10 streets, Park Ex is the perfect size for a day trip. Here are a few spots to explore, when visiting.

Start your day off at a quintessential Greek bakery, at the intersection of Rue Saint Roch and Avenue Champagneur. With rows upon rows of desserts to choose from, Pâtisserie Afroditi is the perfect spot to grab a coffee and a breakfast pastry. From bougatsas, melomakaronas to galaktabourikos and paximadakias, Pâtisserie Afroditi offers up a selection of Greek pastries along with the usual baked staples.

Directly across the street from Pâtisserie Afroditi lies a beloved landmark for Montreal’s Greek community — the Koimisis Tis Theotokou Church. Also known as Panagitsa, this neighbourhood jewel was destroyed in a fire on April 13, 2015. But two weeks later, the Park Ex community came together and announced plans to rebuild the church. Scheduled to open in August 2017, the new building will have modern bones but is being built to keep the look and feel of the original church and even incorporates some of the timber beams salvaged from the original structure. It’s located on the corner of Rue Saint Roch and Avenue de l'Épée.

For lunch head to Tripolis, a family-run spot on the corner of Rue Saint Roch and Avenue Bloomfield. This is one of the last remaining truly traditional Greek eateries in Park Ex offering up options such as pikilia platters (appetizers platter) and lamb chops, and Greek delicacies such radikia, a dish made with boiled dandelion greens.

A stroll in the park

To burn off your lunch, stroll over to Jarry Park, a fascinating meeting point between mainstream Quebecois and the Park Ex community. Resting right on the northern tip of Park Ex, this is one of the three largest parks in central Montreal. It’s a great spot for people watching and the site of the Rogers Cup tennis tournament in August. The Montreal Expos used to play in Jarry Park before 1977.

If Jarry Park didn’t provide ample opportunities for people watching, head over to Rue Jean-Talon Ouest and make your way down south towards Boulevard de l'Acadie. While it’s located on the eastern edge of Park Ex, it has the charm of a bustling main street and captures the essence of Park Ex’s multi-cultural identity.

The best Indian in town

As you make your way down south on Jean Talon, you will inevitably pass Bombay Mahal on the corner of Rue Birnam and Rue Jean-Talon Ouest. This BYOW hole-in-the-wall sometimes has a line snaking out the door, so be prepared. Bombay Mahal is hailed by some locals as the best Indian restaurant in town. From the usuals like butter chicken and biriyani to thalis, this dinner spot is a great way to finish off the day.