How Having Cystic Fibrosis Inspired These Four People to Give Back

"This is what I'm going to give the world - to contribute," says Jeremie Saunders, founder of the popular Sickboy podcast. Tahiat Mahboob

Five decades ago, children with cystic fibrosis (CF) rarely lived past kindergarten but the median age has now increased, especially in Canada due to new treatments, specialized care, and changes in diet. Canadian triathlete Lisa Bentley was diagnosed with CF when she was 20 years old. But it didn’t stop her from having a stellar athletic career. Bentley participated in 33 Ironman races and won 11 of them. Nathan Charles, 28, has a similar story. Born with CF, the Australian rugby player, is the only known professional athlete in the world to play contact sport while having the chronic disease.

Twenty-nine-year-old actor and yoga instructor Jeremie Saunders, the subject of a new documentary, Sickboy, also has CF. Saunders hosts a podcast of the same name where he and his two best friends, Brian Stever and Taylor MacGillivary have “unapologetic, unpolished and unfiltered” discussions about what it's like to live life with a disease.

“I’m not gonna have a kid. That’s not gonna be my legacy. I’m not gonna leave a human,” says Saunders when discussing his podcast in the documentary. “So this is my kid. This is me going like, ‘Well this what I wanna give to the world — to contribute.’”

Like Saunders with his podcast, other people with CF are also raising awareness and giving back through writing, photography or charity work. Here are four.

“What I want my portrait project to touch upon are the profound psychological aspects of cystic fibrosis in adults ― especially those who are diagnosed later in life. It’s sometimes, mentally, very challenging,” Pettigrew said of his project in an interview. Pettrigrew’s second project, Salty Girls, also focused on CF, specifically shedding light on women who have the disease.

Eva Markvoort was diagnosed with cystic fibrosis when she was one. In 2002, at the age of 18, the British Columbia native became one of the youngest recipients of the Queen's Jubilee Award. Four years later, she started maintaining an online journal about her life and disease called 65_RedRoses, a malapropism for children trying to pronounce cystic fibrosis. She added the word “red” because it was her favourite colour. Between 2006 and 2010, the blog received over one million views and raised awareness about cystic fibrosis and the need for more organ donors. 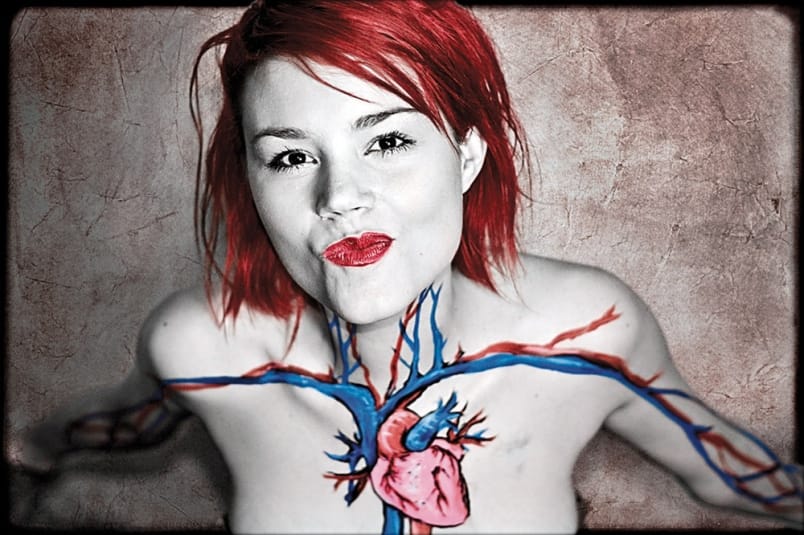 A year after she began blogging about her experiences, two of Markvoort’s friends offered to do a documentary film about her wait for a lung transplant. The documentary, also titled 65_RedRoses, was a tribute to the story of Eva, her online friends Kina and Meg, who also had CF, and the 65 Red Roses campaign to raise awareness about organ donation and cystic fibrosis.

Markvoort received a double lung transplant in October 2007. But less than two years later, her body began rejecting the organs. Her condition worsened and she passed away on March 27, 2010.

Claire Wineland was diagnosed with CF at birth. When she was just 13, Wineland founded Claire’s Place Foundation, a non-profit that provides emotional and financial support to children and families affected by cystic fibrosis. The 20-year-old California native also has a YouTube channel, The Clairity Project, where she connects with other chronically ill teenagers and uses humour in her videos to cope with her challenges.

“I pretty much want to break down some of the barriers that we tend to have with people who are sick. They are not this ‘other thing.’ They are a part of our world and we live complex and interesting lives,” she says on her channel. “So I wanna show you all the painful parts, and the beautiful parts, and the funny parts.”

A TEDx Speaker, Wineland has won numerous awards such as the Fox Teen Choice Awards 2015, the Gloria Barron Prize for Young Heroes, and winner of Los Angeles Business Journal’s “Small Nonprofit of the Year” among others and was named one of Seventeen Magazine’s “17 Power Teens” of 2016.

Wineland died in September 2018 due to complications after a double lung transplant.

Travis Flores was diagnosed with CF when he was four months old. Born in California, he and his family relocated to Ohio so he could be treated by top physicians. When he was 13-years-old, Flores published a book, The Spider Who Never Gave Up, with the help of the Make-A-Wish-Foundation.

“I was hospitalized with cystic fibrosis when I was eight years old and for the first time was meeting other kids with my condition,” said Travis in an interview. “So I started writing something that I could share with other sick kids to help us make sense of something scary and turn it into something positive.”