By Jan. 31, 2020, the pulp mill in Pictou County, N.S., is required to stop piping its effluent —  90 million litres a day — into the Boat Harbour Effluent Treatment Facility, where it spends time in two settling ponds, an aeration stabilization pond and then the Boat Harbour lagoon itself. There, it stabilizes for approximately three weeks before being released into the Northumberland Strait.

The closure of Boat Harbour is mandated by the Boat Harbour Act passed in 2015. The controversial story of the pulp mill, and what may happen when the effluent stops being pumped into the harbour, is told in the new CBC Docs POV documentary The Mill.

For 52 years, the polluted lagoon (see photo above), located in the backyard of Pictou Landing First Nation (PLFN), has significantly impacted the Mi’kmaq community’s way of life. Its members are now counting down the days until Boat Harbour’s closure, changing out numbered tags affixed to a large painting in front of the PLFN Band Council office. The painting depicts Boat Harbour as it was before it became a receptacle for the pulp mill’s effluent, back when it was a pristine tidal estuary the Mi’kmaq First Nation knew as A’se’K or “the other room.”

“On January 31st, when the pulp effluent stops flowing, we’re planning the biggest celebration ever,” says Michelle Francis-Denny, community liaison for the Boat Harbour Remediation Project. But, she adds, there will also be recognition of all the elders they have lost over the years on that day, including all the chiefs they have laid to rest who did not live to see Boat Harbour closed.

Francis-Denny grew up listening to elders telling stories of what life and A’se’K were like before the mill was built. “They tell stories of the white rock that people used to swim to, of being able to hunt and fish and bring food home, to be healthy and live off the land. And the moment that was taken away … the devastation. When you look at the elders and they talk about that devastation, you can feel the hurt, their pain.”

Francis-Denny wonders how different life would be today if her community hadn’t lost A’se’K. “Would our suicide rates be so high? Our drug and alcoholism rates? Our unemployment rates?” she asks. “We were deprived of a chance to live in a healthy environment. We’ve adapted to just surviving.” 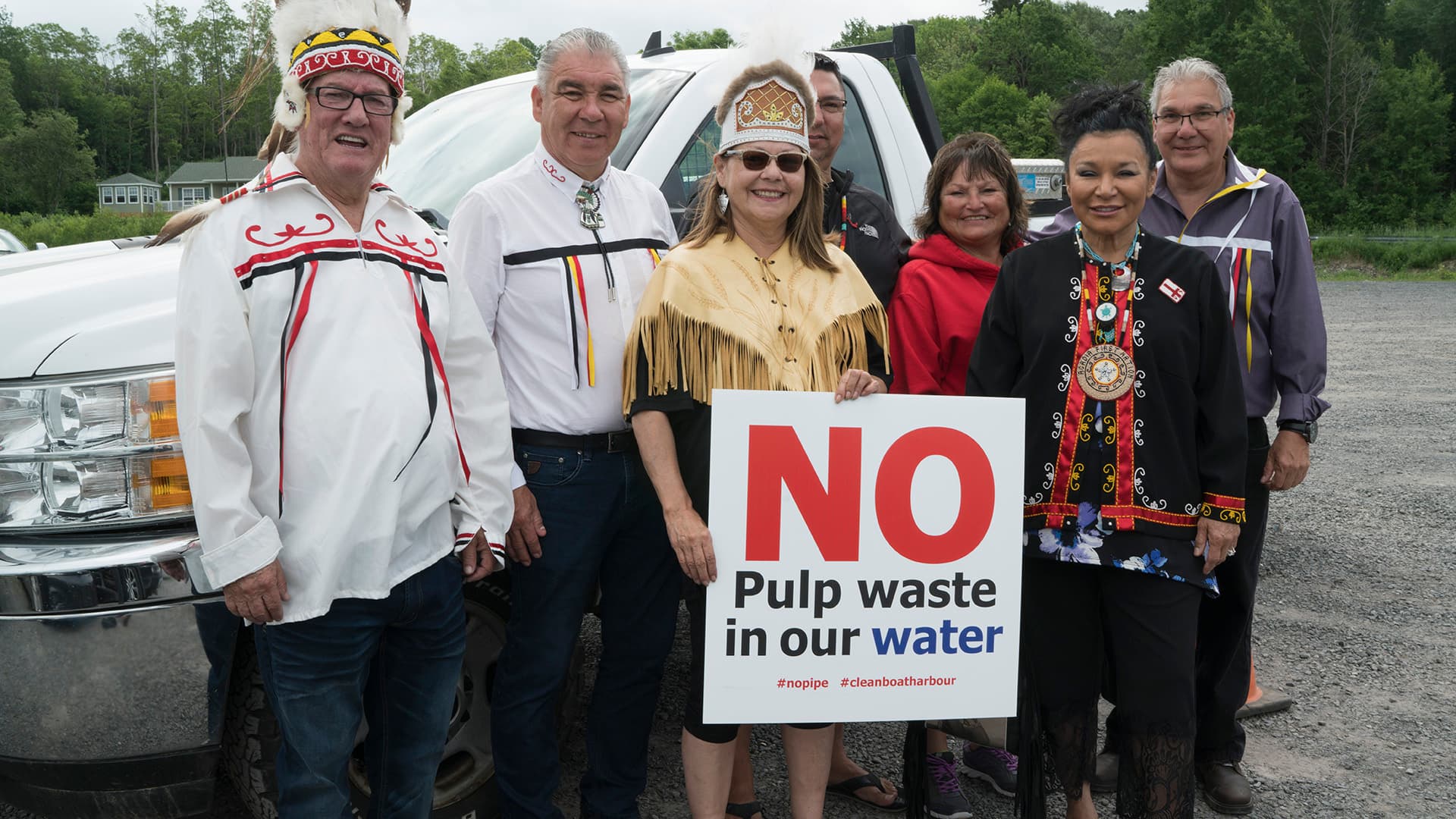 For the past three years, Francis-Denny has been taking information about the remediation project to community members. At first, she says, there was a great deal of skepticism. Even Francis-Denny herself never believed the group would be at the stage they are at now, with their remediation project currently undergoing a federal environmental assessment and set to begin after that.

“To me, it was a big dream,” says Francis-Denny. “The motto for the first year or so was ‘I’ll believe it when I see it.’” Then slowly, both Francis-Denny and her community began to believe that Boat Harbour really would be closed and remediated.

“We’re so close to it we can touch it. We’ve never been this close before,” she says.

How it came to this: The story of Boat Harbour

The story of Boat Harbour’s contamination began in 1965, when a Nova Scotia government official met with the PLFN community to discuss signing over the rights to the estuary so it could be used as a receptacle for pulp mill effluent.

In The Mill, current PLFN Chief Andrea Paul says community members were led to believe that even with the effluent, the water would remain clear.

But just days after the effluent started flowing into Boat Harbour, elders recall that the water turned putrid and brown, and all the fish died.

For decades, PLFN struggled to regain its rights over Boat Harbour so that it might close the facility and restore the estuary. And for decades, members say their efforts were either thwarted or ignored. Former Nova Scotia environment minister Iain Rankin has called the situation one of the worst cases of environmental racism in Canada.

Then in June 2014, the mill’s pipeline ruptured, spilling 47 million litres of toxic untreated effluent over sacred Mi’kmaq burial grounds. Led by Chief Paul, PLFN set up a blockade. They refused to allow the mill to repair the pipe and resume operations until they had a guarantee from the Nova Scotia government that it would legislate a closing date for Boat Harbour so a cleanup could begin.

The result was the Boat Harbour Act of 2015.

A ‘small step’ to start the ‘healing journey’

Part of her job, says Francis-Denny, is to try to maximize the benefits the cleanup will bring — to try to get PLFN back on track. She says that PLFN has gained a lot of allies in the last two years. The federal government has already allocated $100M to restore the harbour back to its natural state.

When PLFN launched the 365-day countdown to the closing of Boat Harbour in a local school, more than 600 people attended, including many non-Indigenous supporters and fishers. Chief Paul says it was heartening “to see the Indigenous and non-Indigenous fishers come together because they want to protect their waters so much, whatever differences we may have had in the past,” adding that “the protest brought people together … [it was] such a healing time.”

At the gathering, Chief Sidney Peters, the co-chair of the Assembly of Nova Scotia Mi’kmaq Chiefs, read out a letter of support from the Assembly to Chief Paul and PLFN. It thanked them for their work on Boat Harbour, something that “will impact the entire Mi’kmaq nation.”

Francis-Denny also sees the remediation of Boat Harbour — like the new school going up on the reserve and the flourishing fishing industry — as a positive for the whole community. “When we look at the remediation project, we look at it as a place to start to heal, and we aren’t going to be able to start to heal until that water stops flowing into Boat Harbour,” she says.

“I always think of the quote that says, ‘You can’t heal in the same environment that made you sick.’ So we look forward to this small step to start our healing journey.”

Joan Baxter is the author of  The Mill: Fifty Years of Pulp and Protest, a book on which the documentary The Mill is based.