Catwalk: Confessions of a Cat Man

Cat men. We are a rare breed, I am told. I learned this two summers ago, when I stumbled into a cat show by accident and bought my “Real Men Love Cats” t-shirt. Little did I know the world I had entered.

I am not an amusement ride person, I told my girlfriend time and time again. And yet, she dragged me to the Canadian National Exhibition in the summer of 2016. Only after my face turned green on the novice “Polar Express” ride did she believe me. So, when I spotted a handwritten sign that read “Cat Show This Way,” I was giddy with anticipation. Cats I can do.

A little context: unlike the characters in Catwalk, I have only one cat, named Beau, whom I love very much. It takes major willpower to keep my human-to-cat household ratio at 1:1. The idea of a cat show seemed the perfect way to scratch this itch. It was like discovering a new band for the first time. “I can’t believe I didn’t know about this until now.” What’s not to love? Adorable cats, fierce competition, passionate people, and countless feline factoids for the curious mind.

But what on earth is a cat show? How do cats compete if, by nature, their independence makes them uninterested in listening to people, let alone in performing tricks for them? What are the criteria? Before I knew it, I was filming the CNE cat show on my iPhone to prove to friends and colleagues this world exists.

Fast-forward six months later, and together with my co-director, Michael McNamara, we began filming Catwalk: Tales From The Cat Show Circuit. Michael, deeply allergic to cats. Me, deeply in love with cats. The perfect balance.

And then came our characters: Oh La La, the fluffy Red Persian destined for the hall of fame, and Bobby, the affable, long, lean and playful Turkish Angora. Never in the history of the Canadian Cat Association have there been two such excellent cats competing in the same class in the same year. 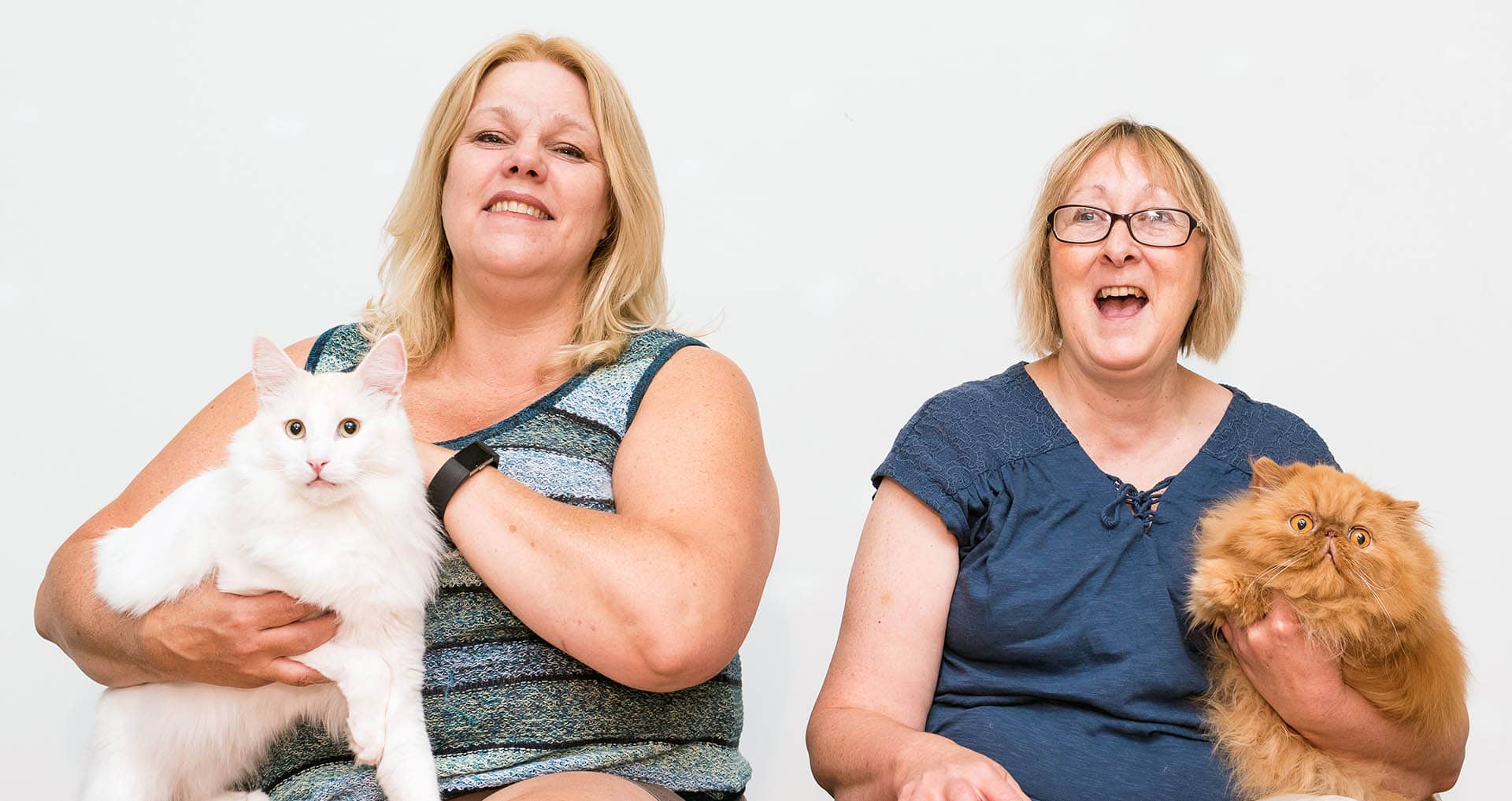 Kim (with Bobby) and Shirley (with Oh La La)

As Bobby’s owner, Kim Langille told us in Cobourg, Ontario:

“I'm proud of my cat and I don't think there's ever been another cat in the history of CCA with as many points as he has who has not been in first place. So, there we go. If you look back at last year or the year before or the year before that, he would have been in first place by a landslide, and no one could have caught him. It is unprecedented when you get two excellent cats in the same year, it just... it usually doesn't just happen like that.”

Witnessing a once-in-a-lifetime feline Battle Royale wasn’t the only surprise for us. We were also able to capture some perfect moments.

In Moncton, New Brunswick in March 2017, we were filming the Fundy Cat Fanciers Show. Nearly every flight from Toronto was being cancelled. After getting bumped several times, Shirley McCollow, Oh La La’s determined owner, somehow manages to arrive in Moncton at literally the 11th hour, the night before the cat show. Shirley had promised to phone me when she parked so that we could film her arrival at the hotel. Then something remarkable happened. As we stood there, cameras rolling, a tiny figure appeared on the moon-lit horizon. Shirley was walking to the hotel, cat carrier in hand, dragging her luggage from what seemed like a kilometer away. Had she walked all the way from Toronto?! Of course not, but that’s how it looked. As it happened, Shirley parked in the wrong lot and needed to walk down the street to the proper hotel. But this didn’t matter. It was the perfect visual metaphor for a woman who will stop at nothing to get her cat to the top of the podium.

There were many other surprises, particularly when it came to the inspiring people involved in the cat fancy. Katie Graham of Halifax, Nova Scotia, a 21-year-old young woman with autism has been showing cats with her mother for 5 years. Over that time, her autism and social skills have improved remarkably. She was scarcely able to attend a cat show for an hour when she first started showing. Today, she competes all day and even attended the national awards banquet last season, where her cat placed in the top ten.


Catwalk is about so much more than cats. It’s about the lengths we go to for the animals we love. It’s about people who are misunderstood, misfits, outsiders, who are driven by a passion and commitment few of us have.