It was my happy place and to this day I am still friends with the people I met there Morgan Elliott, director of Band Geeks

I was half-way through Grade 10 when life stopped. My stepfather was in a horrendous head-on, multi-car crash that left him in a coma for three years before he succumbed to his injuries.  Life, as my family had known it, was over and a new normal began.

It’s during times of tragedy when you discover who your friends really are.

I had joined the Burlington Teen Tour Band — featured in the CBC Docs POV film, Band Geeks — only a few months earlier and it became a lifesaver as family tragedy turned my life upside down.

A community and a safe place

The music centre, where the band practised two times a week, was a safe place to go. I could forget what was happening in my “real” life and be a regular kid again. For my mom, it was an incredible relief to know that I was in good hands with the band: I had more than 200 new friends who had my back. 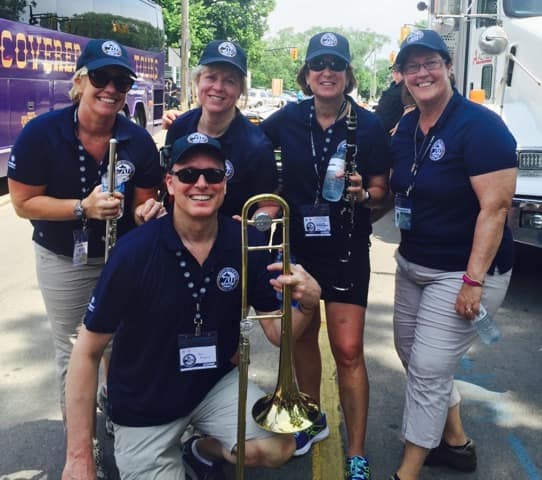 I made lifelong friendships during my five-year marching band career. We spent countless hours practicing and performing, on buses, going to parades or on tour. There were no electronic devices in those days, just old-fashioned talking and singing. It was my happy place. To this day, the people I met there are still friends. The roots are deep.

The Burlington Teen Tour Band recently celebrated its 70th anniversary preparing to march in the 2018 Tournament of Roses parade on New Year’s Day. Considered the Olympics of the marching band world, it’s a huge honour to be a part of it. I had marched in 1980 — the largest parade I’d ever march —  and it had made me incredibly proud to be Canadian. It was also the first time away from home without family and a much-needed break from the daily visits to the hospital’s intensive care unit.

I wanted to find out what was happening with the band nearly four decades later. Would it be the same? Were the kids still having fun? Were life-long friendships being forged?

The first time I walked into practice at the music centre, the same place where I had spent countless hours rehearsing all those years ago, I could hear all the kids warming up. I felt like I was 15 again. The scene brought tears to my eyes. I felt like I was walking into a time machine.

With all the pressure on these kids these days, I could see that participating in the band gave them respite, too. Over the course of five months, our team followed them on their journey to Pasadena and the biggest parade of their marching career.

Who would have thought that all those years later, I would be walking the Rose Parade with the Teen Tour Band again, this time as a filmmaker? I loved every second of it. With the documentary Band Geeks, I am able to share the story of this outstanding band full of incredible kids enjoying themselves and supporting each other.