At 59, this filmmaker went to Germany to compete in an international figure skating competition

‘Don’t make a movie about yourself competing, because it was pretty much impossible’ Nina Dragicevic

Wendy Ord was all-in when she showed up for a beginner skating class — in her fifties — and stood among a gaggle of six-year-old girls. “It was a comedy, really. The parents just wondered if I was weird,” she says.

She kept at it, year after year, eventually working her way up to teenagers’ figure skating classes — and suffering every bruise, twist and sprain imaginable along the way. “Who invented this sport anyway?” she quips.

Before turning 60, Ord even took it two steps further. She not only agreed to compete in the International Skating Union’s 2018 International Adult Figure Skating Competition in Germany, but she also decided to shoot thousands of hours of footage about it.

Figure skating was ‘my one escape’

Ord, 59, is a freelance filmmaker and assistant director based out of a remote area of Lake Country, B.C., just north of Kelowna. Between hectic stints on crowded film sets, Ord lives a quiet life, writing and working from a cabin by a lake.

She also takes care of the surrounding orchards for her landlord — a paradise of property that grows peaches, apricots, plums, apples and cherries. “I’m completely blessed,” she says. “It’s just stunningly beautiful.”

Before embarking on her journey to the Worlds, Ord was skating regularly with a group of women she met in the teen class. They had formed an adult club and had dabbled in competing at a national competition in Kamloops, B.C.

“I had been skating and coming home to my life partner — who was hearing all the stories and seeing all the bruises every night — and he was saying, ‘You have to make a documentary about this,’” Ord says. “He bugged me for years, literally, and I said no because skating was my one escape.” 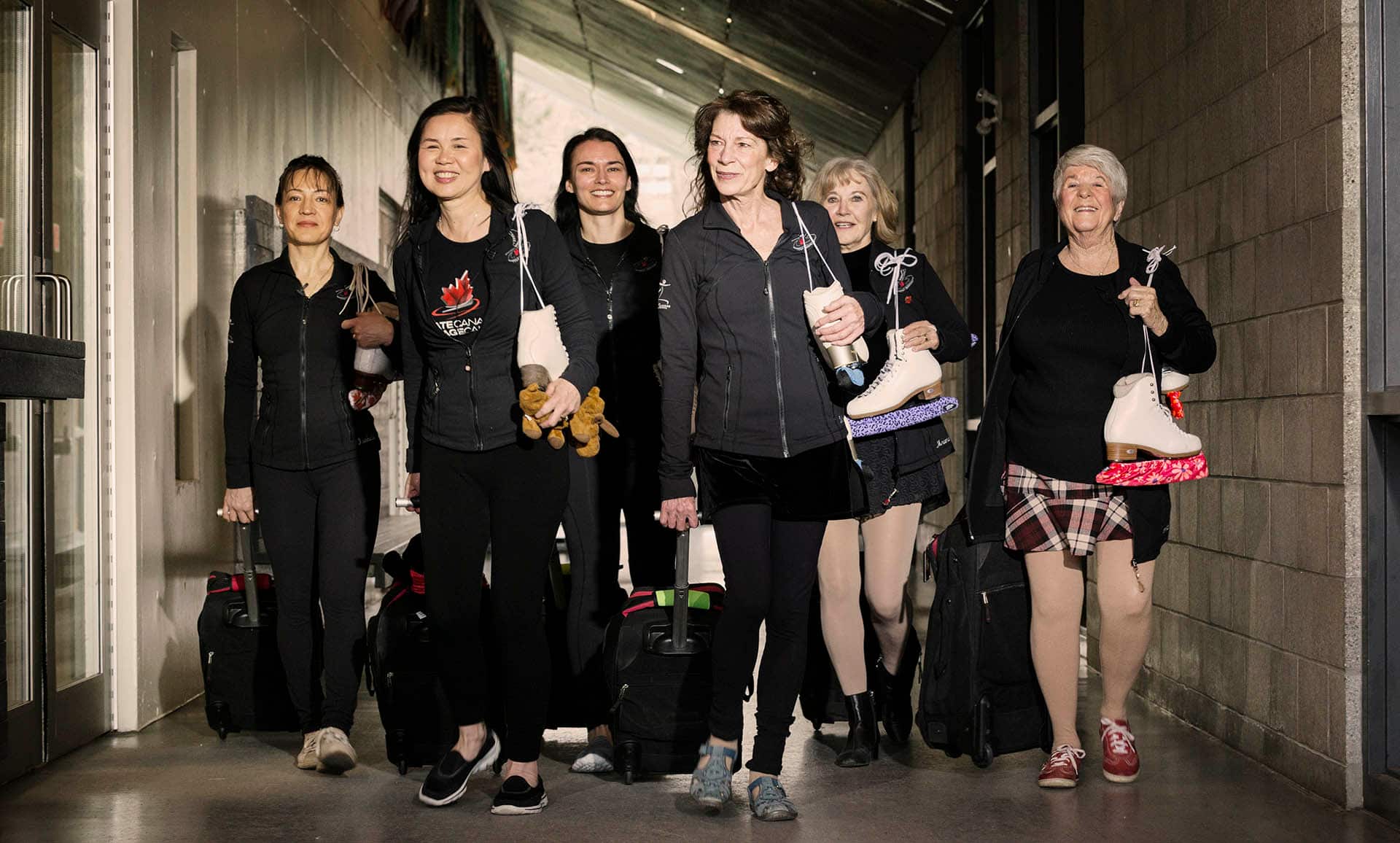 This changed, however, when one woman in her skating group issued a challenge: Why not compete in the international competition coming up in Germany?

“When they decided they wanted to go to the Worlds, I said, ‘Alright, [I’ll make the documentary],’” Ord says. “Because they’re just so amazing, these women. They’re so funny and they’re so inspiring. They were going to do something insane, you know?”

Win or die; I wanted to make this movie good

The documentary To The Worlds spends months with its colourful cast of characters: Karen, the devoutly religious 46-year-old mother who homeschools her three children; Donna, a 61-year-old Chinese woman who describes growing up in a culture that valued male children over girls; Isabella, a 49-year-old Romanian who completed mandatory service in the army and casually speaks of disassembling weapons; and Henrietta, a 77-year-old scene-stealer whose radiant humour and verve belies the fact she’s grieving a recently lost son.

All can skate circles, spin and jump around athletes decades younger.

They also all find purpose and solace in figure skating — and each other. Competing in the international event was a chance to show that to the world.

“That really caught me off guard, how close I became with all of these women,” Ord says. “I usually work on big film sets, and it’s a very demanding job, so in my personal life I’m quite content to just stay at home and be quiet. These women are very different from me and yet we have so much laughter, so much fun. And making the film really made me so much closer to them.”

Bruises and tears, laughter and nerves, frustration and triumph, To The Worlds follows these dauntless women on their mission of world figure skating domination. Several even earn a place on the podium, including Ord herself.

How did she do it? “I’m not really sure,” Ord says with a laugh. “I was thinking, Gee, I’ve really got to do this for the movie — either win or die, to make this movie good.”

In search of another fun, uplifting project

Since returning from the competition in May, Ord admits she’s hardly had time to skate. She’s spent roughly seven months in the edit suite, sifting through “thousands and thousands of hours” of footage.

She looks forward to a quiet stretch in her cabin by the lake, getting back on the ice and considering her next documentary project. After a career spent almost exclusively in drama, she loved the freedom of working with smaller crews.

“I definitely want to do something in a similar vein: fun and funny, uplifting, joyous,” she says. “There are very few topics that include all of those words.”

As for all her skating friends, you can still find them in Lake Country, B.C. — skating, falling, cracking jokes, getting back up again.

“The girls are all now talking about going to the [Winter World] Masters [Games] in Austria in 2020,” Ord says. “They’re all working on new programs to go and compete there, and they’ve booked rooms already.”

“So far, they haven’t been able to drag me into it,” she says, laughing again. “But who knows.”

Watch To The Worlds on CBC Docs POV.