Winston LaRose, an 80-year-old community activist, inspires a Toronto community to challenge the traditional powers as he runs for political office for the first time NOW STREAMING ON CBC GEM
Available on CBC Gem

Mr. Jane and Finch is an insider’s look into Toronto’s controversial 2018 municipal election.

When 80-year-old community activist Winston LaRose detects early signs of gentrification in the Jane and Finch neighbourhood, he embarks on an impassioned run to become councillor of the ward. The opening of several new subway stations nearby and a confirmed plan to build light-rail transit in the neighbourhood, in particular, cement Winston’s instinct to advocate for the community and protect its residents against displacement.

This will be no easy task: LaRose will turn 81 during the campaign. But after working in the Jane and Finch neighbourhood for decades, he has become a well-known personality among both residents and politicians. His storefront office in Yorkgate Mall is steps away from the busy central intersection. And he’s on a first-name basis with long-standing politicians such as Toronto mayor John Tory, as well as and Humber River–Black Creek MP Judy Sgro who believes that “nothing in Jane and Finch would be completed without his hand.”

Mr. Jane and Finch goes behind LaRose’s campaign personality to ask: Who is the adored Mr. Winston LaRose? Why is he so passionate about the Jane and Finch community? And when most 80-year-olds are slowing down, why is he seeking to undertake the biggest job of his life?

Born in Guyana in the late 1930s, LaRose grew up in the independence generation, an era when African and Caribbean countries used military and political power to overthrow colonial control. Having witnessed the arduous journeys of unforgettable political leaders including Patrice Lumumba, Walter Rodney and Kwame Nkrumah, he saw the impact their struggle had on others who were hungry for freedom and change.

These leaders also sparked a sentiment of Pan-Africanism across the Caribbean, Europe and North America, which enabled LaRose to travel the world and build a life in Canada. But it wasn’t until after family tragedy struck that LaRose got involved in advocacy himself.

The devastation ignited his passion for activism, and he immersed himself in the African, Caribbean and Black communities, going everywhere with a camera. LaRose now has a unique archive of video spanning 60 years. This profound dedication, however, negatively impacted LaRose’s relationship with his surviving children, with whom he has little contact today. “My community has now become my family,” he says. 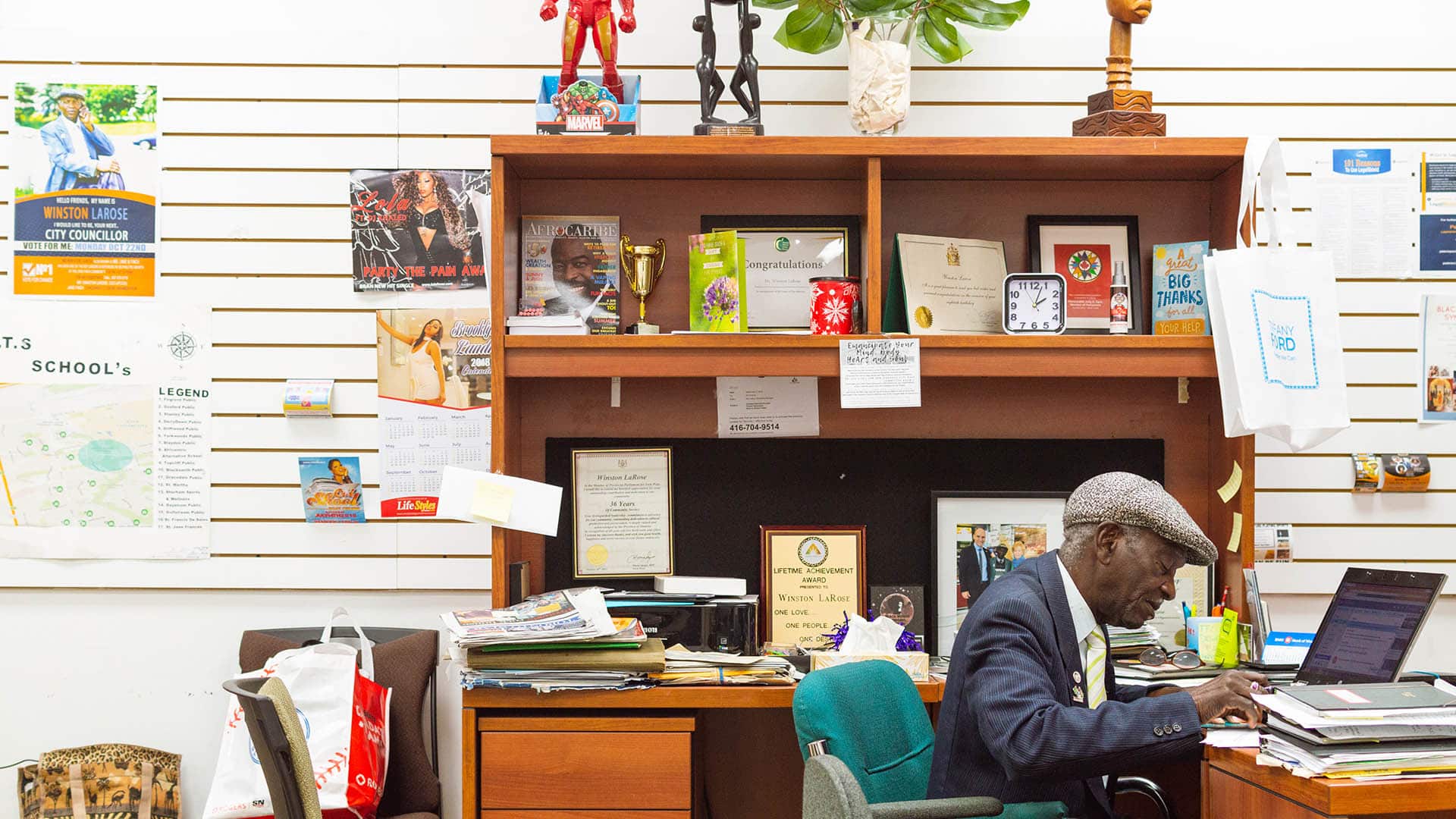 LaRose in his community office

Since the 1960s, Jane and Finch has become home to many new immigrants; it exploded from a small community of 1,300 residents in 1961 to 33,000 in 1971. However, the roughly 82,000 residents who live there have not seen their economic opportunities or social services grow in tandem with the population.

It was these conditions that led LaRose to become the director of the oldest community organization in the area for 25 years. The Jane Finch Concerned Citizens Organization (JFCCO) sits inside the Yorkgate Mall and assists residents in navigating wide-ranging issues from police brutality to deportation.

Since the 1970s, numerous reports have studied the communities’ needs, but politicians have overlooked them in favour of the quick-fix “solution” of increased policing. “Our politicians are not dealing with the fundamental root of what’s causing crime,” LaRose says.

Former city councillor Giorgio Mammoliti claims that the area needs a complete overhaul. But what can LaRose do against such a powerful adversary? He decides the only way to effectively help his community is, for the first time, to throw his hat into the political ring.

But with no significant funders or fundraising strategy, how effective can his campaign be? LaRose believes his energy, support and strong track record in the community can inspire a non-voting community to cast their ballot for him. “A lot of people underestimate my capabilities because I am 80,” LaRose says, “but I’m active, I’m vibrant, and I don’t stop.”

Initially optimistic about his chances, his campaign is thrown into turmoil when newly elected premier Doug Ford decides to change the political landscape and decrease the number of local MPs from 47 to 25, increasing competition for a seat on city council.

In Mr. Jane and Finch, LaRose’s small and overworked team begins to disintegrate, and he finds himself in a fight to save his campaign and, most of all, empower the people of his beloved Jane and Finch community.