The Toronto-based creator of the sci-fi comic Godhead tours the store The Beguiling and discusses some of his favourite comics. 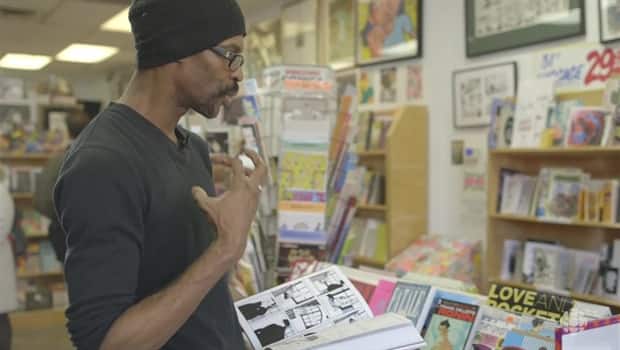 3 years ago
4:50
Ho Che Anderson, creator of the Martin Luther King, Jr. comic biography King and the new sci-fi graphic novel Godhead, takes us to his favourite comic book store in Toronto to show us some of the books that have shaped his life. 4:50

Ho Che Anderson is the Toronto, Ont.-based author of numerous graphic novels, including the Martin Luther King biography, King and the horror thriller Sand & Fury. He is also the official poster artist of the 2018 Toronto Comic Arts Festival, which is taking place May 12-13, 2018. His latest book, Godhead, is a gritty sci-fi graphic novel about how society reacts after a powerful corporation creates a device to communicate with God.

CBC Books caught up with Anderson at his favourite comic book store, The Beguiling Books & Art in Toronto, to learn about the comic books he loved reading. Watch the tour in the video above and check out his recommendations below.

"This just happens to be a copy of one of my favourite comic books of all time: Frank Miller's Rōnin. This is probably the comic book that's the most responsible for me standing here. I was crazy about this thing. It came out when I was 13 years old. It blew my mind. I couldn't figure out what the story was about. I couldn't figure out where it was going. I couldn't decipher the techniques that were being used to create this story. It showed me that comic books could be whatever you could conceive of them being."

"Dave McKean, for me, is one of the true geniuses. You give this guy any assignment and he can knock it out of the park. I read this thing and it was another book — almost like Rōnin — where it was sort of confounding in a way because not a whole lot was going on with it. It was all moments in a person's life: very still, very slow, very deliberate, very slice-of-life. And yet you knew there was something else going on beneath the surface. I didn't know what it was. I couldn't tell if it was something supernatural. I didn't know what was going on. Incredible book."

"It's a huge science fiction, cross-generational, epic saga. I think it's supposed to be about two parents on the run, I'm still not entirely certain what I'm reading to be totally honest with you but I'm loving it. I kind of get the impression when I read this book that Brian K. Vaughan is just making these stories up as he goes along from issue to issue. But for whatever reason he's hit the right formula and these books are so addictive and incredible."

Barney and the Blue Note by Philippe Paringaux, illustrated by Loustal

"This is a comic book that I loved very much as a teenager. I got into an art film phase at the time. I loved movies where people would sit and talk around a table and nothing was really going on. This is about a jazz saxophonist in the 1950s — it's like a comic book version of the kind of stuff that I was into. I look back on it now and I realize there was more going on thematically and on a plot level than I was able to recognize at the time."

"Peter Bagge is the only cartoonist who ever made me laugh out loud. Reading his work was like listening to a comedy album. I'd get a legit belly laugh at every page. I don't know how he pulled this off. It was a combination of his turns of phrase, and the sheer joy and cartoony style of his images."

"These are very beautiful books. I didn't expect them to be quite so pretty. It was shocking and exciting for me to see Margaret Atwood dipping her toes into this world. It was a beautiful thing, it was almost like hearing about Ava DuVernay and Spike Lee directing superhero movies. I didn't see that one coming. And it is drawn by a Black man. There are so few of us out there doing this kind of work. Good stuff."

"I love Charles Burns. I must've spent a year trying to imitate this beautiful brush line that he's got which is so beautiful and precise it looks like it was drawn by a robot. And yet you know I know that it wasn't. I've seen Charles Burns with my own eyes. I know he's a real guy. This is an incredible book: disturbing, beautiful, obtuse. I love this book."

Ho Che Anderson's comments have been edited and condensed.