On the Canada Reads 2020 finale, the panellist shared why his book, Radicalized by Cory Doctorow, speaks to current issues such as the Black Lives Matter movement, police brutality and inequality. 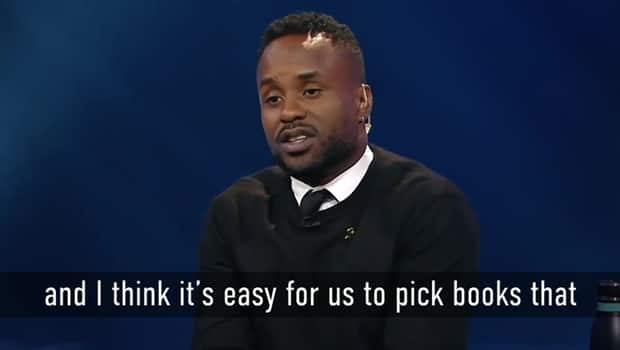 6 months agoVideo
1:21
On the Canada Reads 2020 finale, the panellist shared why his book, Radicalized by Cory Doctorow, is a must-read in today's world. 1:21

During the Canada Reads 2020 finale, Toronto Raptors media personality and host Akil Augustine, defending Radicalized by Cory Doctorow, outlined why he feels the collection of four science fiction novellas is a book Canadians should read to help make sense of current events happening both in and outside of Canada's borders.

Akil Augustine: "We should read Radicalized because Clive Mensah is dead. Clive Mensah was a young man who lived in a suburb of Mississauga, Ont., having a mental health crisis, and the police tased him six times and he died.

"So when we talk about defunding the police, we're not talking about stopping the police. We're talking about putting funding to helping people with mental health disorders, domestic violence and abuse and other options so that people don't die at the hands of the police.

"Our Native brothers and sisters are dying at the hands of the police. Innocent citizens, people with mental health issues so I focus on the story of Model Minority and I think it's easy for us to pick books that speak from our side of the aisle.

"I chose a book that spoke from both the side of the aisle that doesn't understand what I'm saying and does. Cory did a great job of painting both sides of the aisle when it comes to what we do about policing in the future using [superhero analogies] of the American Eagle and Bruce Wayne. Kids can kind of lend themselves that world a bit world a bit better.

"It also touches on [Black Lives Matter] which Canada has a hard time talking about — and it manifested in our inability to talk about it here on this show this year. We're going to talk about that because the BLM movement has pushed for LGBTQ rights, they push for native rights a push for the rights of minorities.

"And when you raise the floor instead of raising the ceiling that helps everybody."