The murder of an artist is the backdrop for Louise Penny's landmark Three Pines mystery.

The discovery of a dead body in the woods on Thanksgiving weekend brings Chief Inspector Armand Gamache and his colleagues from the Sûreté du Québec to a small village in the Eastern Townships. Gamache cannot understand why anyone would want to deliberately kill well-loved artist Jane Neal, especially any of the residents of Three Pines — a place so free from crime it doesn't even have its own police force.

But Gamache knows that evil is lurking somewhere behind the white picket fences and that, if he watches closely enough, Three Pines will start to give up its dark secrets... (From Sphere)

He was surprised to see her. That was his little secret. Not that he'd ever seen her before. No. His little secret was that in his mid-fifties, at the height of a long and now apparently stalled career, violent death still surprised him. Which was odd, for the head of homicide, and perhaps one of the reasons he hadn't progressed further in the cynical world of the Sûreté. Gamache always hoped maybe someone had gotten it wrong, and there was no dead body. But there was no mistaking the increasingly rigid Miss Neal. Straightening up with the help of Inspector Beauvoir, he buttoned his lined Burberry against the October chill and wondered.

From Still Life by Louise Penny ©2005. Published by Sphere.

Breakaway17:28Talking 10 years of mystery novels with Louise Penny
It has been 10 years since Louise Penny published her first novel, introducing the world to Chief Inspector Gamache and Three Pines. The CBC's Rachelle Solomon spoke with Penny about this special anniversary. 17:28 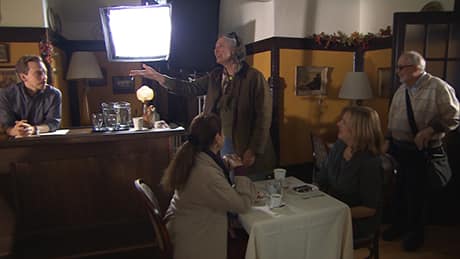 8 years ago
2:14
On the set of Still Life, the movie adaptation of Louise Penny's best-selling novel. 2:14

All in a Weekend Montreal11:55The adventures Inspector Armand Gamache turn 10!
This week marks the 10th anniversary of the release of Louise Penny's debut novel, 'STILL LIFE'. Still Life was the first book in what has since become an enormously popular murder/mystery series. Set in the fictional Quebec town of Three Pines, it focuse 11:55
now