Roughing It in the Bush

Susanna Moodie's account of her life as an early homesteader in Upper Canada was first published in 1852.

Roughing It in the Bush chronicles Susanna Moodie's harsh and often humorous experiences homesteading in the woods of Upper Canada. She describes a life of backbreaking labour, poverty and hardship on a pioneer farm in the colonial wilderness. Her sharp observations, satirical character sketches, and moments of despair and terror were a startling contrast to the widely circulated optimistic portrayals of life in British North America, written to entice readers across the Atlantic. A frank and fascinating account of how one woman coped, not only with a new world, but with a new self, this unabridged text continues to justify the international sensation it caused when it was first published in 1852. (From Emblem Editions)

In the year 1832 I landed with my husband, J. W. Dunbar Moodie, in Canada. Mr. Moodie was the youngest son of Major Moodie, of Mellsetter, in the Orkney Islands; he was a lieutenant in the 21st regiment of Fusileers, and had been severely wounded in the night-attack upon Bergen-op-Zoom, in Holland.

Not being overgifted with the good things of this world — the younger sons of old British families seldom are — he had, after mature deliberation, determined to try his fortunes in Canada, and settle upon the grant of 400 acres of land, ceded by the Government to officers upon half-pay.

Emigration, in most cases — and ours was no exception to the general rule — is a matter of necessity, not of choice. It may, indeed, generally be regarded as an act of duty performed at the expense of personal enjoyment, and at the sacrifice of all those local attachments which stamp the scenes in which our childhood grew in imperishable characters upon the heart.

Nor is it, until adversity has pressed hard upon the wounded spirit of the sons and daughters of old, but impoverished, families, that they can subdue their proud and rebellious feelings, and submit to make the trial.

This was our case, and our motive for emigrating to one of the British colonies can be summed up in a few words.

The emigrant's hope of bettering his condition, and securing a sufficient competence to support his family, to free himself from the slighting remarks, too often hurled at the poor gentleman by the practical people of the world, which is always galling to a proud man, but doubly so, when he knows that the want of wealth constitutes the sole difference between him and the more favored offspring of the same parent stock.

From Roughing It in the Bush by Susanna Moodie ©1852. New Canadian Library Edition published by Penguin Random House Canada, 2007. 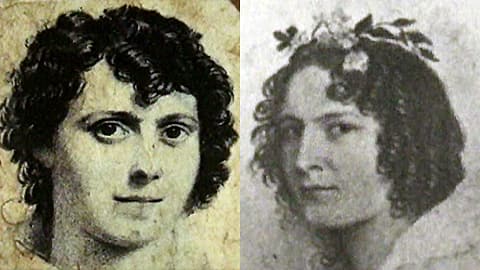 Roughing it with Moodie and Traill