This book by Farley Mowat is a fictionalization of his time spent up north observing Arctic wolves in the wild.

Hordes of bloodthirsty wolves are slaughtering the arctic caribou, and the government's Wildlife Service assigns naturalist Farley Mowat to investigate. Mowat is dropped alone onto the frozen tundra, where he begins his mission to live among the howling wolf packs and study their ways. Contact with his quarry comes quickly, and Mowat discovers not a den of marauding killers but a courageous family of skillful providers and devoted protectors of their young. As Mowat comes closer to the wolf world, he comes to fear with them the onslaught of bounty hunters and government exterminators out to erase the noble wolf community from the Arctic. (From Emblem Editions)

One hot summer day I was meandering aimlessly beside a little local creek when I came upon a stagnant pool. In the bottom, and only just covered with green scum, three catfish lay gasping out their lives. They interested me. I dragged them up on the bank with a stick and waited expectantly for them to die; but this they refused to do. Just when I was convinced that they were quite dead, they would open their broad ugly jaws and give another gasp. I was so impressed by their stubborn refusal to accept their fate that I found a tin can, put them in it along with some scum, and took them home.

As It Happens7:34Farley Mowat Obit
Elizabeth May is the leader of the Green Party of Canada. She was also a close friend of Farley Mowat. Mr. Mowat died at his home in Port Hope, Ontario. He was just days shy of his 93rd birthday. 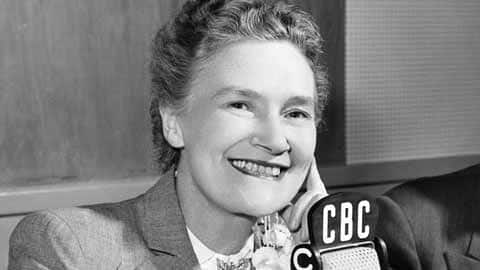