Crossroads will be available on March 16, 2021. You can read an excerpt form the book now.

On April 6, 2018, the news of a bus crash sent shock waves through Canada, and around the world. The Humboldt Broncos, a junior hockey team, were travelling to an away game, when a semi-truck missed a stop sign, and the bus carrying the team crashed right into it.

Sixteen people onboard the bus were killed.

Kaleb Dahlgren, the assistant captain of the team at the time, was one of crash's 13 survivors. He shared his story of recovery, and eventually went on to study — and play hockey again — at York University.

It's been three years since the crash, and Dahlgren is now sharing his story in a memoir, Crossroads.

"Writing this memoir was challenging, emotional, cathartic, and enlightening. I was able to reflect on all the various crossroads in my life, the people who helped me navigate them, and those who have shaped me into the person I am today," Dahlgren wrote on Instagram.

A portion of the book's proceeds will go toward STARS ambulance, who were among the first responderts to the crash and helped save the 13 lives, including Dahlgren's.

You can read an excerpt from Crossroads below.

The day everything changed.

It was just another road trip, like the thousands that sports teams take every year. We weren't thinking about life or death when we tossed our green and gold bags into the cargo hold, walked up the stairs with our necessities, and claimed our seats on the bus.

There was a game to play — two hours away, against a team that had beaten us in triple overtime two nights before. The Nipawin Hawks had a three-games-to-one lead over us heading into Game 5 of the second round in the Saskatchewan Junior Hockey League playoffs. We needed to win this game. It was the only thing on our minds.

The Humboldt Broncos have been a fixture in Saskatchewan hockey for more than five decades. The green and gold sweaters were originally hand-me-downs from the Swift Current Broncos of the Western Hockey League way back in the early 1970s. However, the team quickly formed an identity of its own. Humboldt is an agricultural city of under 6,000 people, about an hour and a half east of Saskatoon, Saskatchewan. The team was run entirely by local volunteers, including the first coach. This tells you a lot about the nature of the Broncos. They are a team built by a community — and they remain a part of that community in every sense of the word.

We needed to win this game. It was the only thing on our minds.

Our team was the latest generation in that long tradition, and we wore our jerseys with pride every time we pulled them over our heads.

Our spots weren't assigned, but we always gravitated to the same location every time we travelled on the bus — the force of habit that only makes sense when you are part of a team. There are just certain things you know if you've been part of one — rookies load the bus, vets get first dibs on seats.

I was one of nine 20-year-old vets on the team, all of us in our last year of junior eligibility. I sat where I always did, in the fourth row from the back of the bus. If I wasn't involved in the card games and bad jokes going on around me, I could usually drown out the noise just long enough for a pre-game nap or to listen to music and think about life.

The bus was a safe place. Sort of like a home on the road. It was filled with teammates who were like brothers, and a collective group of personnel that was like a big family. Some of the best memories I have come from being on the bus... also, some of the worst. 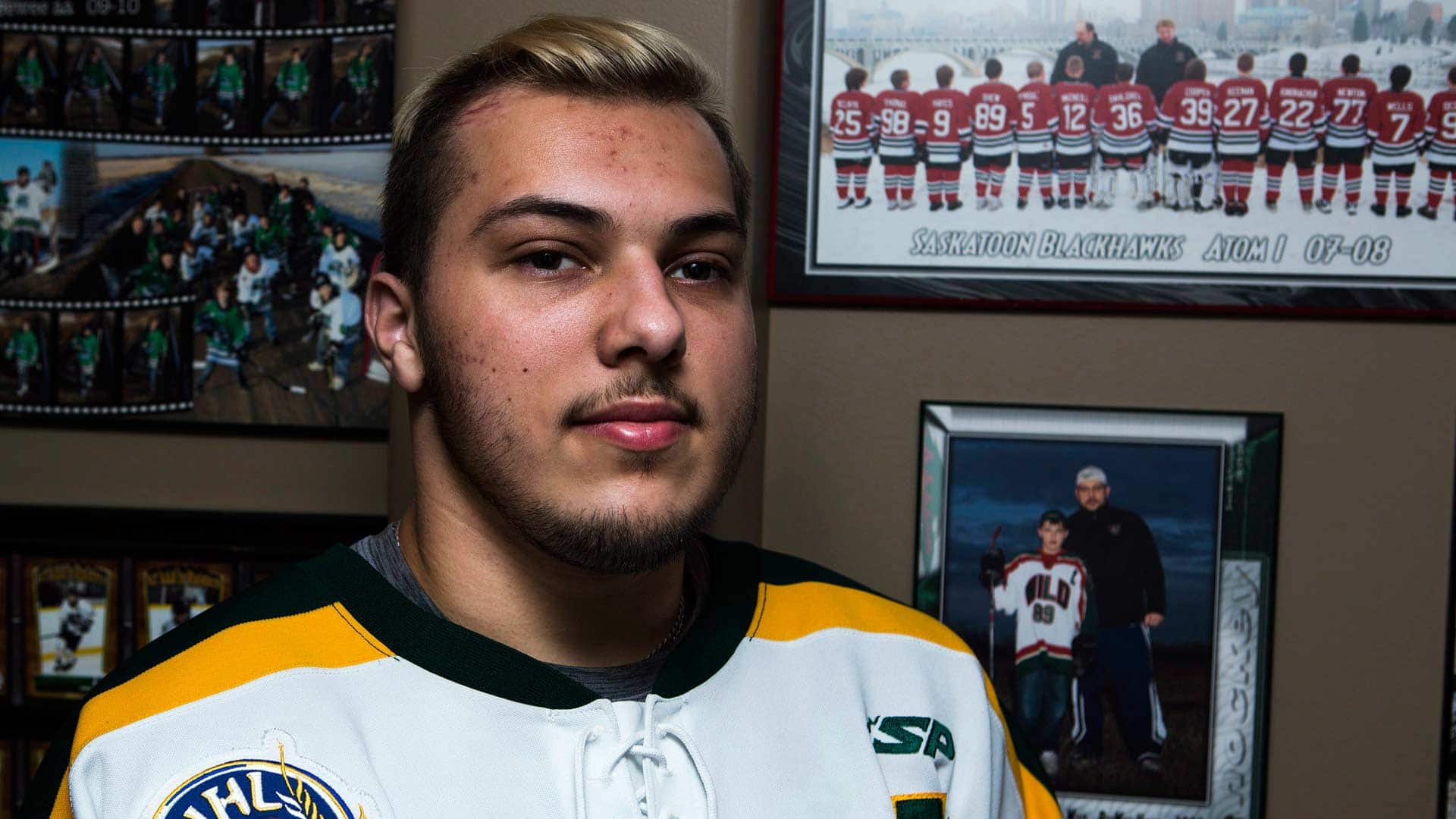 There were 29 people with us — 29 different stories, and mine was just one of them. Each individual was an important part of the group we had become: from our veterans to our rookies and affiliate players, our play-by-play announcer to our statistician, our bus driver, our athletic therapist, and our coaches. Everyone played a pivotal role in building a team culture unlike any other.

Of course, I think we were pretty extraordinary — that's why I wanted to be a Bronco — but truth be told, we were also pretty ordinary in so many ways. A team just like any other, covering excessive numbers of kilometres, crisscrossing the flat prairies to different cities and towns.

We pulled out of the parking lot at the Elgar Petersen Arena in Humboldt close to 2:50 p.m. and drove across the street, turned a corner, and arrived at our coach's house. Darcy Haugan was much more than a bench boss; he was the kind of coach whose influence stays with you for a lifetime. The kind of coach who is more interested in what kind of men his players become than how many points they score or how many games the team wins. His wife, Christina, had cooked a pre-game pasta meal for our team — each pre-packaged into containers for every person on the bus. I remember Darcy running into his house to grab a belt he'd forgotten for his suit, or maybe it was his shoes — there are just so many of those small details that I try hard to remember these days, but simply can't.

There are many things I do remember, though. Like how we took a slightly different route out of town that day. Just over half-way to Nipawin, we turned right towards Tisdale, instead of continuing on, like we usually did. Another small detail that charted our course that day. Not a big deal. It was just a five-minute detour. We hardly even noticed that our path had changed.

From Tisdale, Nipawin was just 40 minutes away and we were just a couple of hours from game time. The game was still the only thing that mattered. Most of us were still in our stylish charcoal-grey Broncos track suits, which we always wore on the bus. These were the nicest track suits I have ever worn. Our suits were laid out flat in the overhead compartments above the seats.

We turned out of Tisdale, heading north.

When we practiced that morning, Darcy wanted to make sure we had taken care of every last detail. We had our backs to the wall against Nipawin but were not about to surrender. You'll know the feeling if you've spent any time with a team that is facing elimination. As we continued to make our way north, we were all in various states of pre-game preparation. Some of us sat quietly. Others had their headphones on and were listening to music. A card game involving some of the guys was finishing up just in front of me at the table with inverted seats. We were about 30 minutes out by then. So close.

There were 29 people with us — 29 different stories, and mine was just one of them.

It was the most important game — and potentially the last — of my junior career. I sat in my seat and turned on one of my go-to playlists to get ready.

A few of the guys were standing in the aisle, putting on their suits. There was banter and laughter. I turned up the volume.

And everything went black.