The first installemnt of this children's book series by Mordecai Richler is illustrated by Dušan Petričić.

Poor Jacob Two-Two, only two plus two plus two years old and already a prisoner of The Hooded Fang. What had he done to deserve such terrible punishment? Why, the worst crime of all — insulting a grown-up. (From Tundra Books)

Standing inside the gates of the children's prison, Jacob Two-Two stared up into the menacing face of the warden — the dreaded Hooded Fang.

"Remove this prisoner to the lowest, dampest dungeon,' growled the Hooded Fang, 'And put him on a diet of stale bread and water." 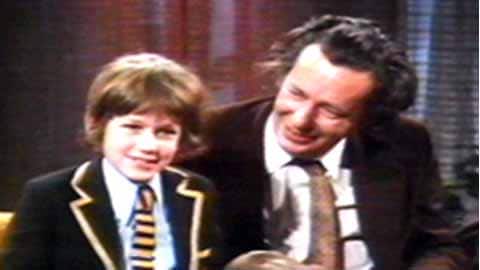 Mordecai Richler and son Jacob in 1976