I Am a Truck

Michelle Winters' debut novel is a moving tale about the possibilities and impossibilities of love and loyalty. The book is on the 2017 Scotiabank Giller Prize shortlist.

A tender but lively debut novel about a man, a woman, and their Chevrolet dealer. Agathe and Réjean Lapointe are about to celebrate their 20th wedding anniversary when Réjean's beloved Chevy Silverado is found abandoned at the side of the road — with no trace of Réjean. As her hope dwindles, Agathe falls in with her spirited coworker, Debbie, who teaches Agathe about rock and roll, and with Martin Bureau, the one man who might know the truth about Réjean's fate.

Set against the landscape of rural Acadia, I Am a Truck is a funny and moving tale about the possibilities and impossibilities of love and loyalty. (From Invisible Publishing)

The Silverado was reported sitting next to the highway with the driver-side door open just eight hours after Agathe had kissed Réjean on the front step of their cottage and sent him off fishing in the rain with a Thermos full of coffee, four sandwiches au bologne, and a dozen date squares. It was pouring so hard that as they embraced, the rain smacked loudly on Réjean's enormous back. He blew her a kiss as he reversed out of sight, and she smiled and touched her lips.

He was lying to her. She had known from the second he came home the night before and experimentally said, "Hé, sais-tu quoi?" As he told her the lie, she studied him, halfamused, waiting for him to crack. He was an awful liar, but he persevered artlessly in his tale of a fishing trip on Saturday with the men from work. Their twentieth wedding anniversary was next week and Agathe wasn't about to challenge him on trying to cover up a surprise for her. In fact, she was relieved. Réjean had been so odd lately — distracted, distant… Only in bed was he fully engaged, and there they were trying something new. Their physical relationship had flourished over the years, despite the normalcy and tedium innate in all couples, and despite what Agathe considered to be the loss of her figure. As early as her twenties, her body had succumbed to a condition that afflicted generations of women in her family: a ballooning of her upper half, while her legs remained coltish and slim. As her top half grew, the weight strained her spine, giving her a subtle hunch that would grow more pronounced as the years wore on. But every new pound only enticed Réjean more as he kissed and bit and squeezed her extra flesh.

From I Am a Truck by Michelle Winters ©2017. Published by Invisible Publishing. 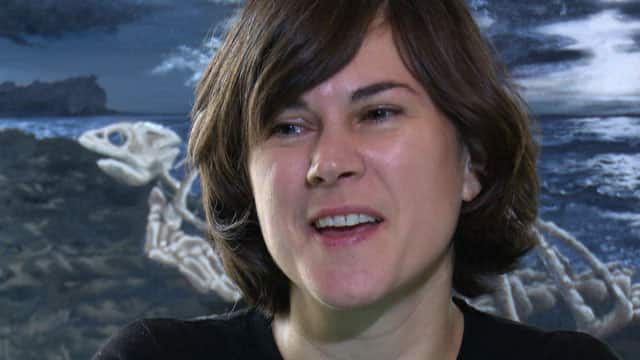 3 years ago
5:10
Giller Prize nominee Michelle Winters' story isn't one of overnight success. In fact, her shortlisted book I am a Truck almost didn't even get published. Her debut novel took 10 years to write, making its success an even bigger surprise to Winter. 5:10