Angie Abdou's novel follows the fortunes of two athletes: a wrestler and a swimmer, both vying for a place on the Canadian Olympic team.

This remarkable novel takes readers deep into the gruelling, often solitary world of amateur sports, and follows the fortunes of two athletes: a wrestler and a swimmer, both vying for a place on the Canadian Olympic team. Neither a classic sports novel, nor a simple coming-of-age story, The Bone Cage offers a unique spin on both beloved genres.

The Bone Cage was a contender for Canada Reads 2011, when it was defended by Georges Laraque.

Angie Abdou the author of several books, including the novel In Case I Go and nonfiction book Home Ice. She is a professor at Athabasca University.

Digger has always been a good sweater. He's only just stepped into the sauna and already he can feel the itch of sweat behind his ears, around his hairline, along his spine. It's a natural talent his teammates envy, especially at a time like this. Digger, Ben and Fly lie sprawled in the sauna — cutting weight for the Olympic Trial matches this weekend, freshly flown to Toronto from Calgary this morning. All three are veterans to the routine. First, they unroll the plastics — pants and hooded jackets they crumpled into stinking balls the last time they cut weight. Eventually, they'll pull the clothes on in the sauna, but first they'll get a bit of a sweat going.

From The Bone Cage by Angie Abdou ©2007. Published by NeWest Press.

More about The Bone Cage

12 years ago
Duration 3:10
Angie Abdou, author of The Bone Cage, talks about her writing career and Canada Reads. 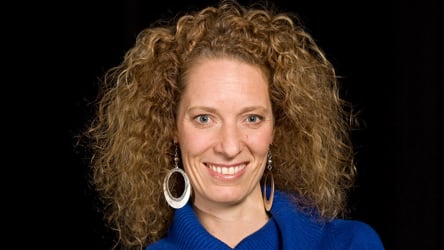