George Canyon and Alayna Fender debate fiction vs. nonfiction when it comes to inspiring empathy

On Day Two of Canada Reads 2020, the two panellists engaged in a debate over whether nonfiction or fiction is better at fostering meaningful debate. 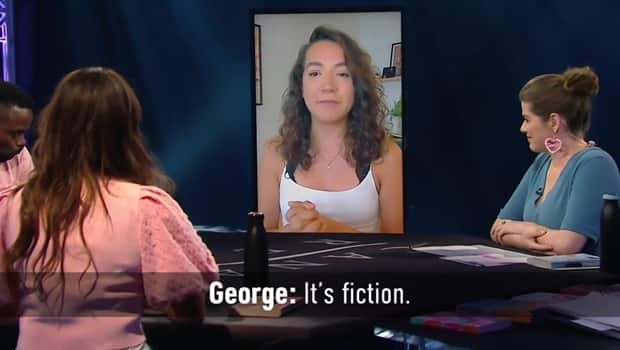 6 months agoVideo
3:04
The two panellists engaged in a debate over whether nonfiction or fiction is better at resonating with readers and fostering meaningful conversations. 3:04

Which literary form is best at inspiring empathy — fiction or nonfiction?

On Day Two of Canada Reads 2020, that question was at the heart of a debate between George Canyon, defender of the memoir From the Ashes by Jesse Thistle, and YouTuber Alayna Fender, defending the novel Small Game Hunting at the Local Coward Gun Club by Megan Gail Coles. Both books tell powerful stories of people struggling in Canada, marginalized in a society built on systemic discrimination.

The panellists debated over which book best fit the Canada Reads 2020 theme of "the one that will bring Canada into focus."

George Canyon: "From the Ashes is not only a story of fear and negativity and abuse, but more importantly, a love story. Jesse is telling his life story, uninhibited and transparent. He keeps falling and everybody, including strangers, are trying to pick him up through love. But more importantly, the writing style that Jesse Thistle has is incredible. [It felt like] I was sitting with my best friend — a brother, if you will.

"I was so taken back by how he took me in on page one and I felt like I was right there with him and you have to have that first before you get any message out, before you can create any empathy, which this book creates so much of. It was incredible. It made me think about myself and how I looked at Canada and how I look at people. It made me a better person after reading it."

Alayna Fender: "I enjoyed this book. I think it's a really important read. I do think that  Small Game Hunting at the Local Coward Gun Club has all of the aspects, all of the pros of George's book, plus more."

Alayna Fender: "Yeah and I think that's a plus.

Alayna Fender: "You even said earlier today that you have trouble criticizing Samra's book because it's true, because it's a life story. What fiction allows us to do is criticize, it allows us to ask questions and have discussions because we're not afraid of saying something wrong about one of the characters' lives, right? Because they're not real people."

George Canyon: "You can still do that with nonfiction."

Alayna Fender: "I think it allows for that more freely within fiction. I also think that through fiction, there isn't a degree of separation in terms of identifying with the characters. In nonfiction, you always know that this is a real person separate from yourself. With fiction, it allows you to put yourself in those shoes and recognize where those experiences exist in your life as well."

George Canyon: "But you won't develop the same empathy. It's not possible because you can separate yourself from that fictional world — that's Star Trek or that's Star Wars. That's not the life and the world I live in — the Canada that I live in.

"In my travels, I've seen countless, thousands of people that were homeless on the streets, drug addicts. And it really has a profound effect on you, after you read Jesse's book, knowing and going through that in your mind and the things you've seen."