On the Canada Reads 2020 finale, the panellists talk about on the importance of learning about others and intersectionality in literature. 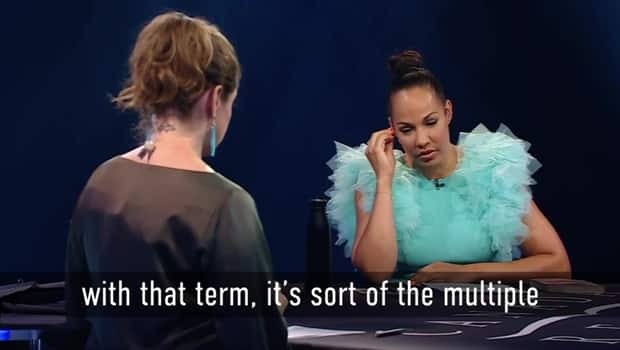 6 months agoVideo
3:14
In the Canada Reads 2020 finale, The Handmaid’s Tale star and her fellow panellists debate the necessity for the stories told in their contending books. 3:14

On the fourth and final day of debates, the Canada Reads 2020 panellists  Amanda Brugel, defending We Have Always Been Here by Samra Habib, and Kaniehtiio "Tiio" Horn, defending Son of a Trickster by Eden Robinson, went head-to-head.

The memoir We Have Always Been Here chronicles Habib's childhood in Pakistan, her experience facing religious persecution, arriving in Canada as a refugee at age 10 and her journey of coming out as a proud queer Muslim woman.

The novel Son of a Trickster follows a teenager named Jared Martin in Kitimat, B.C., known in his community for making the best weed cookies and having a scary mom. Though faced with personal challenges, he does his best to take care of his struggling family.

The two remaining contenders made the case for why their respective books shed light on important stories that ought to be read by all Canadians.

Fellow panellist and country musician George Canyon also voiced his support for stories that "break down the walls of ignorance and discrimination."

During Canada Reads 2020 Canyon championed From the Ashes by Jesse Thistle, a memoir about homelessness, abuse, incarceration and redemption through higher education.

Amanda Brugel: "I was talking a lot on the first day about intersectionality. For people listening at home that aren't familiar with that term, it's sort of the multiple identities of a person, i.e. a woman and then a woman of colour and then a woman of colour who identifies as queer. All of those create multiple levels of discrimination and we have stories about women and we have stories about people of colour and we have stories about people from the LGBTQ+ community, but very rarely do we have stories that meet within the intersectionality of those topics. It speaks to so many people. I think that's one way in, but because of the lessons she talks about in forgiveness and getting over hardships, I think that all Canadians can take away from this and then just have a better knowledge of a group of people that are, like I said on the first day, living in the shadows.

"I think it's imperative that all Canadians read this book. It also gives a community and a group of people who have been ignored to feel valued, to feel seen, to feel safe, to feel recognized. And while I do think it's important to push forward books about people of colour and books written by women, I also think that if we can add more groups into that, as many as possible, then I think that brings in as much of our community that we don't talk about as possible and that's really important to me."

Kaniehtiio Horn: "I agree with everything. I, unfortunately, don't know that all Canadians are going to go to the bookstore and pull that book off the shelf. Do I think they should? Of course I think they should. But do I think they will? I don't know if some are ready to read something like that. I think they should be ready. I definitely think it's time that people read a book like this and hear from a voice like Samra's. And I think that's why Son of a Trickster is a lot more accessible because it has an Indigenous perspective, it's a coming-of-age story… but it's layered in all of this fun stuff like magic and [the] supernatural. I think it's more accessible."

George Canyon: "Well, my wife, who's my best friend and the reason I'm actually alive today to be truthful and honest, says everyone has a story. And I think both books, all books that we've discussed here — all five — really everyone needs to take the time to read because the walls of ignorance are not going to be broken down unless you can identify. And I truly believe there's a common denominator with everybody in the world that we will identify with someone else if we take the time to read their story.

"And I think if we bring books like this into the light so that people, other people who may not be readers all the time, look and go, 'I need to sit down and read that.' I think when they understand Samra's story, they'll identify with something with Samra because we all have that common denominator. And it will really break down the walls of ignorance and discrimination."