On Day One of Canada Reads 2020, the panellists got into a debate about what makes a book truly Canadian. 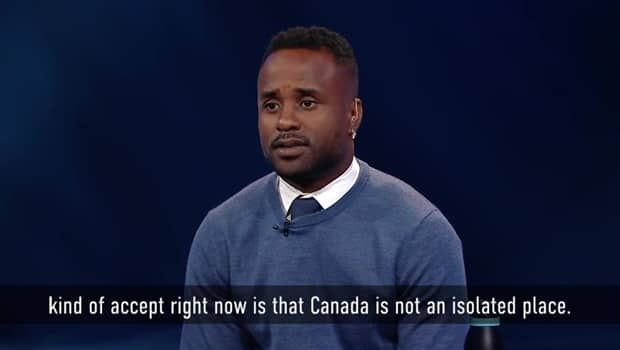 6 months agoVideo
5:53
The Raptors TV host explains why Cory Doctorow's short story collection highlights the problems that connect Canada to the rest of the world. 5:53

On Day One of Canada Reads 2020, the panellists didn't shy away from making their positions known right off the bat.

Toronto Raptors media personality and host Akil Augustine was defending Radicalized by Cory Doctorow, a collection of four science fiction novellas that explore how technology is abused on both corporate and personal levels. Though all stories take place in the U.S., Augustine argued that their themes resonate inside Canada's borders as much as outside.

Actress Amanda Brugel, defending We Have Always Been Here by Samra Habib, and Alayna Fender, defending Small Game Hunting at the Local Coward Gun Club by Megan Gail Coles, countered that they both felt Radicalized didn't do enough to address diverse perspectives or issues more specific to Canada.

Below is a condensed version of their argument. Watch the video above for their full debate.

Akil Augustine:  "A lot of the issues the United States has to handle, we have to handle too... [The book] talks about healthcare. Canada thinks we've got a great healthcare thing going. Well, I've got to buy supplementary health insurance and dental. He talks about police brutality. We've had our own issues. I was at protests just a couple months ago in Toronto. These are things that are relevant right now.

"I don't know if an individual story can help us bring this entire large land mass together. What we can do [is] weave our stories together and try to find the unifying ties and beams of our society. And that's what he did. I really believe he did that really well."

Amanda Brugel: "My largest problem with this book was that three of the four stories were told through the lens of angry men. I'm so tired of having to consume these stories as though they reflect society as a whole. Whose society? Not mine. I'm a woman and I'm a woman of colour.

Alayna Fender: "This is Canada Reads and we're looking to bring Canadian issues into focus."

Akil Augustine: "I'm a Black man and I can sit here and I can nitpick about whatever he says and say that, 'As a Black man, he didn't represent me.' I think we're at some point going to have to get over our beefs with the fact that some of these problems are larger than our own individual stories. We're not going to be able to just neatly define ourselves the way we want to.

"If you look at the year 2020, and look back 20 years from now, these are going to be the issues they remember, whether you live in Denmark, Canada or the United States.