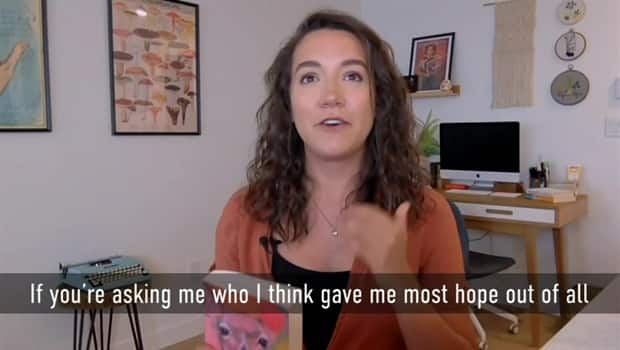 6 months agoVideo
1:26
On Day Three of Canada Reads 2020, the social media star talked about how literature can best encourage change in society.   1:26

During the third round of Canada Reads 2020, panellists were asked about how their book inspires hope.

Alayna Fender admitted that there's not much hope in the novel she's defending, Small Game Hunting at the Local Coward Gun Club by Megan Gail Coles.

The book takes place during a bleak winter storm and chronicles the diverse, interconnected lives of people in downtown St. John's. Each character's life has been marked by acts of violence, misogyny, racism and classicism.

Fender argued that the absence of hope in Coles's novel serves a greater purpose — to inspire change.

Read her argument below.

Alayna Fender: "To discuss Small Game Hunting at the Local Coward Gun Club in a context of hope — it's not really going to work. If you're asking me who I think gave me the most hope out of all of these books, it's [We Have Always Been Here].

"Small Game Hunting at the Local Coward Gun Club drives you off a cliff. It's not here to make you feel hopeful. The ending of this book is heart-wrenching.

"When we have a book that ends with hope, that ends with a happy ending, we as a reader can walk away and feel like our job is done. They're doing great. This book, the character, the real life person, they have triumphed. No further work needed.

"Whereas with Small Game Hunting at the Local Coward Gun Club, you are left feeling….We get to decide, as an audience, as a community. Nothing has changed in this book. These characters haven't changed. The systems that are in place haven't changed. And so that's why we get the ending that we get. We walk way knowing that there's work to be done.

"In that way, the lack of hope inspires change."