Slut Island isn't the name of a bad reality show. It's a Montreal music festival all about empowerment.

Slut Island isn't the name of a bad reality show. It's a Montreal music festival all about empowerment 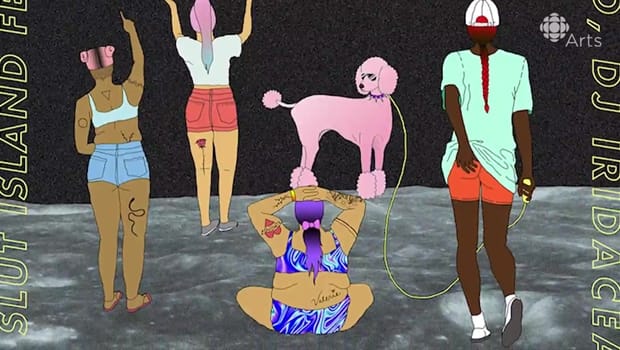 3 years agoVideo
3:32
Slut Island isn't the name of a bad reality show, it's a Montreal music festival all about empowerment. 3:32

The word "slut" has been used to degrade women by suggesting they're sexually promiscuous or immoral. It's a word that has hurt many people, and it's still jarring to hear. So when Sultana Bambino and Franke Burge created a music festival and named it "Slut Island", it was a clear move to reclaim the word and empower artists.

And those artists have appreciated the gesture. "It allows space for people to grow and experiment and feel comfortable — allows for space for other people to show their creativity," says Witch Prophet.

In this video, you'll get an inside look at Slut Island and its energized lineup of artists. And you can keep up with the festival and its plans for next year here.

Watch CBC Arts: Exhibitionists online or on Friday nights at 12:30am (1am NT) and Sundays at 3:30pm (4pm NT) on CBC Television.

April Aliermo is a Filipinx-Canadian musician, songwriter, entrepreneur and educator based out of Toronto. She plays bass and co-writes music and lyrics for Hooded Fang and Phèdre. She strives to build conscious communities while having the time of her life.