11-year-old Amanda Murphy on her 55+ year-old-dance companions: "We're all just the same — we all can dance."

11-year-old Amanda Murphy on her 55+ year-old-dance companions: 'We're all just the same — we all can dance'

When Toronto-based social services organization Frontlines announced that they were looking for kids to participate in an after school hip hop dance program, Betty Anane was in.

The 12-year-old loves hip hop and dancing has always been a part of her life. But what was different about this dance program — which is put on by York West Active Living Centre — is that it's intergenerational. In other words, Betty and her friends would be sharing their hip hop class with adults that were 55 and older. 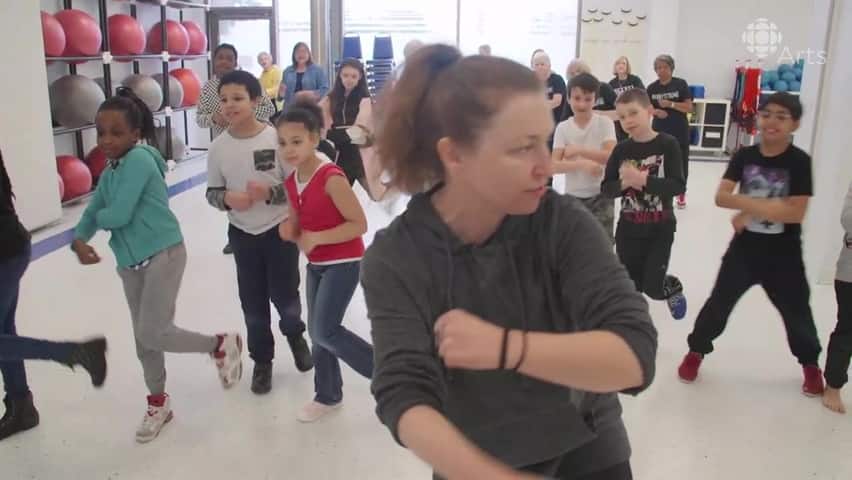 Inside a multi-generational dance class

2 years ago
2:59
"Hip hop, for me, is completely out of my comfort zone," Irene Hollett admits. But she was intrigued at the idea of a joint class with young kids. Filmmakers: Brigitte Sachse and Paul McNulty 2:59

"I learned that older people, they don't just sit around and watch TV or sleep all day — they actually do stuff. They get out and like exercise or dance," she tells filmmaker Brigitte Sachse.

"It definitely helps people realize that even if you may look different on the outside — you may be older, you may be younger — we're all just the same," says 11-year-old Amanda Murphy. "We all can dance and it just brings people together."

Irene Hollett, aged 71, spent over 12 years dancing when she was younger, but raising a family and working full-time meant there was a long period of her life where she had no time for it anymore — so being able to dance again now is an "absolute joy." She sees the benefits of building bridges in the community: "I think it's really important to bring the young kids and the older adults together in one common activity of dance so that we can get to know each other."

York West executive director Suzanne Texiera brought the program together to bridge the cultural and generational gap that kept Frontlines and York West worlds apart, even though they were neighbours.

"It was important to have these two populations meet and dance to break down any stereotypes that they may have of each other and to build a friendship that extends beyond the dance floor," she says.