They're the first things humans ever painted. Why are we so fascinated by animals?

In Art 101, Professor Lise (not really a professor) takes us through humanity's artistic obsession with the animal kingdom.

In Art 101, Professor Lise (not really a professor) takes us through our obsession with the animal kingdom

Did you know that there's always a rat less than four feet away from your face? And that for every person, there are 228 animals?

That's a total lie, but today we're talking about our obsession with the animal kingdom.

I'm Professor Lise (not really a professor) and this is Art 101 (not really a class). We're here to go on a deep dive into an idea, an artwork or a story from the art world that's controversial, inexplicable or just plain weird. 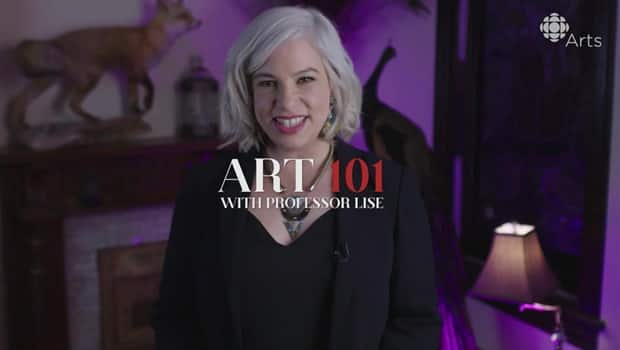 Why are we so fascinated by animals? They're the first things we ever painted. Researchers just found maybe the first figurative painting ever in a cave in Borneo and guess what? It's of an animal.

In the Lascaux Caves in France from about 15,000 BC, the walls are covered in painted horses, bison and tiny little people. Why? There've been a ton of theories — things like the importance of the hunt. Respecting the life and power of animals was necessary to live in the world alongside them.

Our relationship with animals has changed, and the medium we used to make images of them transformed, but our drive to document them hasn't.

Take this painting from 1850s Alberta:

Colonialism had a lot of art attached to it, and this work by Canadian painter Paul Kane tells us a lot about how colonizers saw the day to day life of Indigenous people. It's called Assiniboine Hunting Buffalo, and it not only shows us that colonizers built myths around Indigenous life but that a painter like Paul Kane recognized bison as central for food and trade — that it was an important part of living on this land.

From the beaver to the bear, we've continued to narrate our history through animals. Beavers have been the centre of our fur trade — a symbol for our nation — and in this 2016 painting by Kent Monkman, you can see the legacy of beavers as important to our survival but also as victims of humans who have exploited them physically and symbolically.

Need more evidence that we can't get animals off our minds? Bears!

So why are we so obsessed with the animal kingdom? Maybe because it's a way to see ourselves from a distance, make sense of the world, show pride in it, critique it or get a little taste of how small we are as tiny little humans.

But seriously though, next time you hear about an amazing painting made by an elephant...just keep on walking, kid. Animals are in our art, but we don't need to make them paint.

See you next time for another deep dive in Art 101.