"For the elders or the seniors that join us, this was a really important space. They looked forward to it every week."

'For the elders or the seniors that join us, this was a really important space' 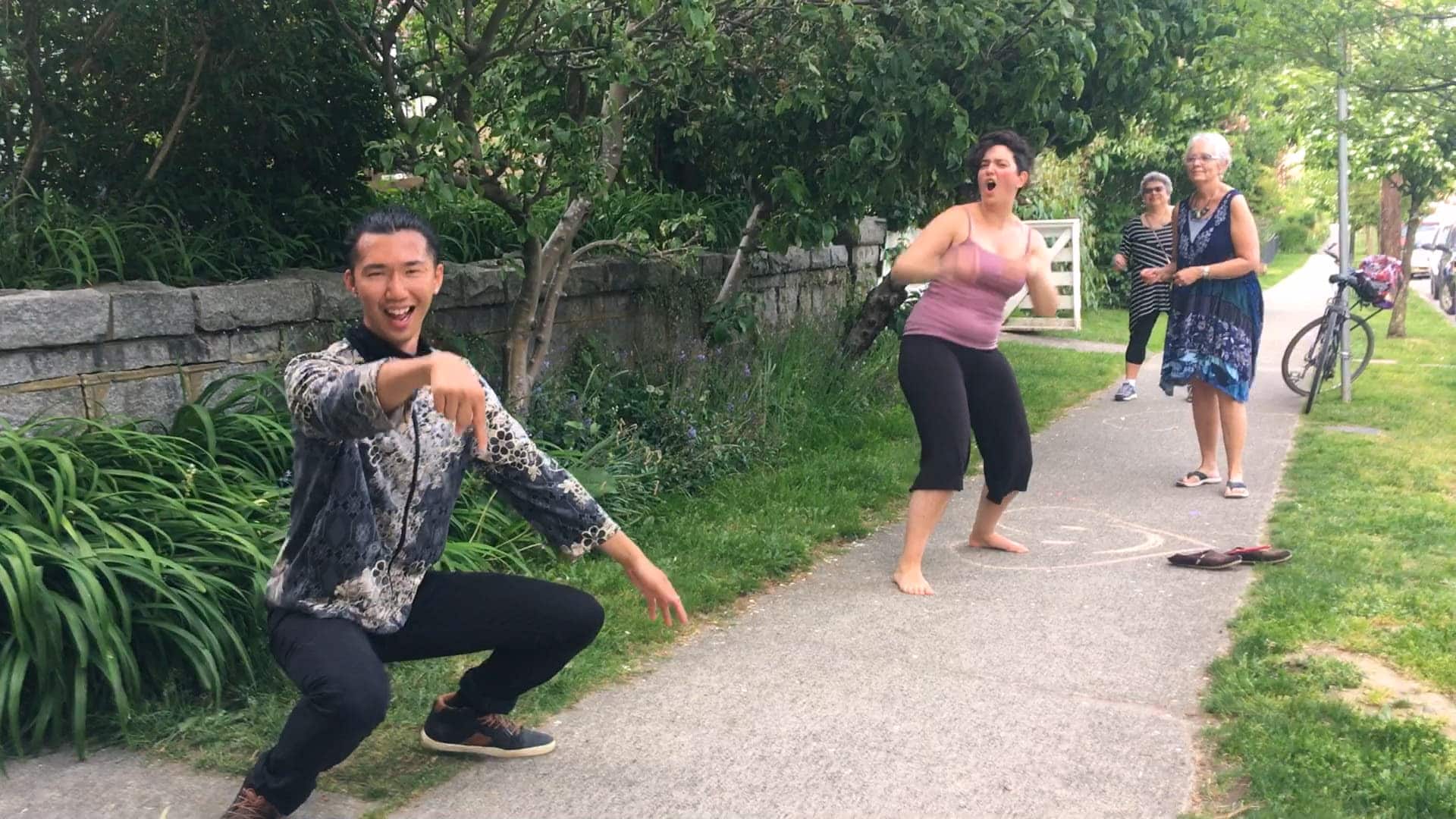 28 days ago
4:46
"For the elders or the seniors that join us, this was a really important space. They looked forward to it every week." 4:46

During an era of physical distancing and enhanced isolation, three roommates have been bringing their neighbourhood together by organizing a series of Sunday night street dance parties.

Claire Love Wilson, Jackson Wai Chung Tse and Gillian Thomson live in an artist collective known as the Blue House in Vancouver's Kitsilano neighbourhood. At the start of the COVID-19 pandemic, they took to their front porch at 7 p.m. every evening to bang pots and pans in support of health care workers. One day, their neighbour asked them to lead the block in a singalong.

"We polled the neighbourhood in our Facebook group," says multidisciplinary artist Tse. "They all said we should sing 'I Will Survive' by Gloria Gaynor."

On April 5, the Blue House artists set up their speakers and microphones outside to sing in karaoke fashion for the street. This spontaneously kicked off the Socially Distanced Sunday Night Singalong, which went on for more than 20 weeks.

"We wouldn't have done it for this long if it wasn't something that was being fed back to us was really benefiting people," says Wilson, who is an improvisational theatre performer and musician. "For instance, the elders or the seniors that join us — for them, this was a really important space. They looked forward to it every week."

Aside from older adults, families and young children would attend. And to ensure it was following health guidelines of 50 people or less at a gathering, the Blue House did not promote the event and kept it to only neighbours and a few passersby. The artists would also draw hearts on the road to signify safe dancing distances and announce reminders to stay two metres apart.

Five months into the Sunday singalongs, the Blue House received a noise complaint. Although the artists were already intending to wrap it up during the colder months, the grievance moved up the end date for the parties.

"It's just been really interesting, and I've felt some of the injustice of the way the system works," Wilson says. "The power of that noise complaint can [bar] things like this from spontaneously happening."

In this video, CBC Arts attends the last Socially Distanced Sunday Night Singalong to meet the artists and roommates of the Blue House, dance with some of the regular attendees and discover what is next for the neighbourhood.

"The singalong has just brought us into connection with so many people," Wilson says. "Now, when I walk around the neighbourhood, I'm constantly running into people. There's talk of a socially distanced soup night that might happen through the fall."

Jen Muranetz is a documentary filmmaker and video journalist living on unceded Coast Salish territories in the place now known as Vancouver. In 2018, she was a recipient of the Banff Diversity of Voices Initiative fellowship. More recently, Muranetz has produced several short documentaries, including the upcoming film What About Our Future? (2020).