There's no one way to do drag, and Vancouver collective The Darlings are proving that loud and queer

The non-binary quartet are about to offer their most ambitious performance yet.

Queeries is a weekly column by CBC Arts producer Peter Knegt that queries LGBTQ art, culture and/or identity through a personal lens.

There are few folks pushing the boundaries of drag quite like the four members that make up The Darlings. A multidisciplinary performance collective featuring Continental Breakfast (Chris Reed), P.M. (Desi Rekrut), Maiden China (Kendell Yan) and Rose Butch (Rae Takei), the Vancouver-based quartet turn conventional drag upside down by exploring the "genderqueer, non-binary, and trans experience through the use of movement, poetry, performance art, theatre, and immersive installation."

During the past few months, The Darlings lit up our dire existences (and apparently offended Facebook censors) with "Quarantine I" and "Quarantine II," two innovative performances they put together from their respective self-isolations. And now, they're coming back together for the first show they've worked together in person since February — and their most ambitious presentation in the two years since forming. Streaming as part of the Queer Arts Festival's 2020 virtual edition, the hour-long filmed performance promises to be a highlight of our new digital festival realities, and you can watch it from anywhere this Friday, July 24 at 7pm PT.

In anticipation of the performance, The Darlings chatted with CBC Arts about their process, which they also had documented through a short film by CBC's Creator Network that was directed by Eric Sanderson and produced by Claudia Goodine. You can watch the film just below and then scroll further down to read a bit about The Darlings' plan to take over the world (whenever the world once again becomes safe to take over, that is). 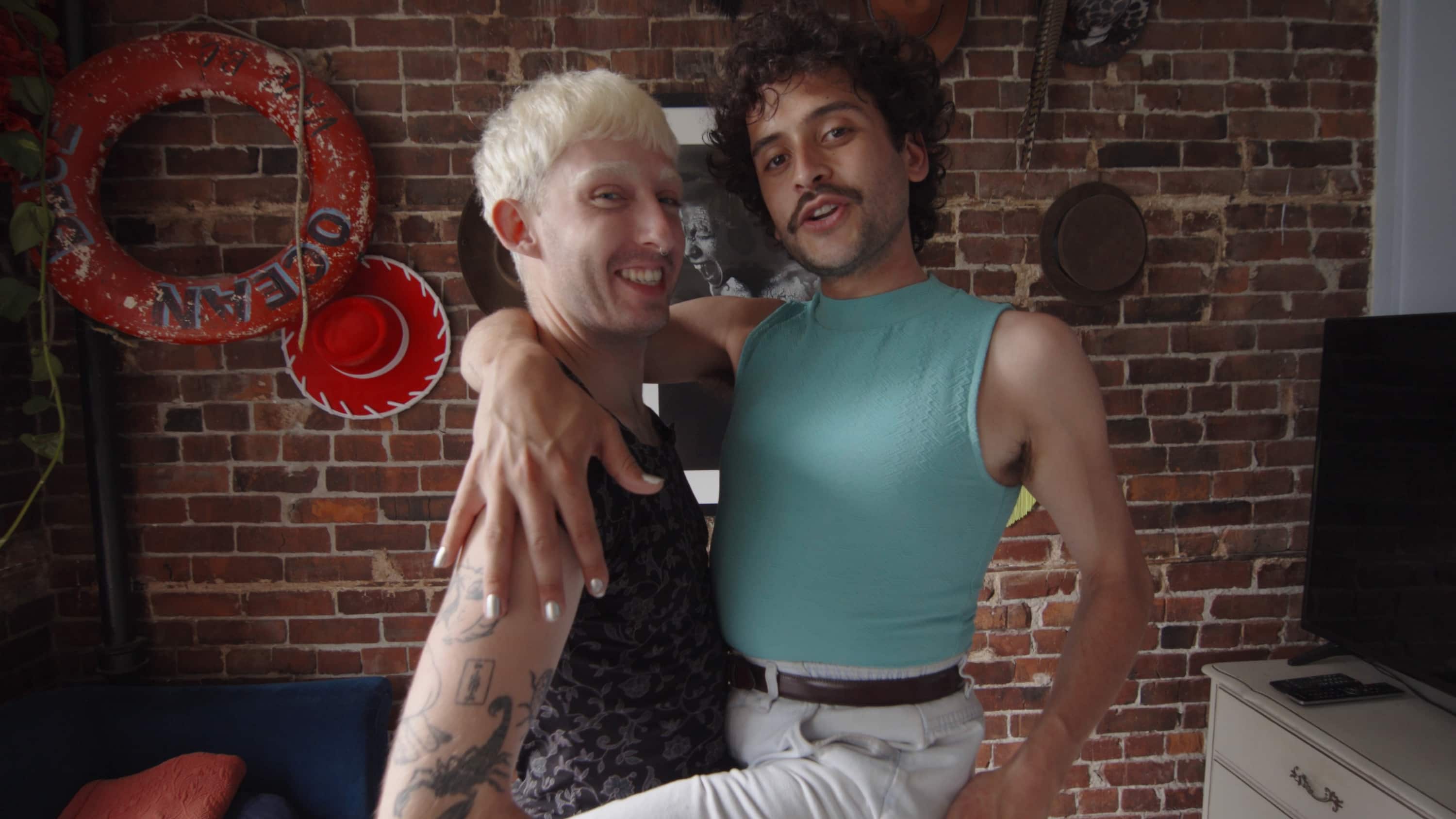 The Darlings: Live from Quarantine

3 months ago
11:35
This film follows non-binary drag performers Continental Breakfast (Chris Reed), P.M. (Desi Rekrut), Maiden China (Kendell Yan) and Rose Butch (Rae Takei) as they get ready to perform together in person for the first time since the start of the pandemic. 11:35

Tell me about The Darlings and how you all came together.

Rose Butch: We're a multidisciplinary non-binary drag performance collective, and as a group we're turning two this year! Before we started performing as The Darlings, we would work with each other at different shows and parties around town; [we] admired each other as performers and we've always gotten along as friends. We all come at drag from different viewpoints that all somehow intersect — PM is a trained dancer, I'm a theatre artist, Continental Breakfast is a comedian and actor, and Maiden China is a writer and activist.

PM had gotten the four of us together to work on a photo shoot with Sean Alistair, who's an artist that we've ended up collaborating with quite a bit, and brought up this idea that they had with Breakfast about the four of us putting together an immersive night that didn't follow the conventional format of drag shows as we knew them — where we could do riskier and more experimental stuff that we all seemed to be drawn to in our performance anyway.

Our first show went up in a DIY warehouse space to an audience of 89 people, just after Pride in 2018. We had no idea what to expect. But the energy was electric, the support was there, and we knew we were onto something.

What is The Darlings' mission and what do you aim to express through your art?

Maiden China: I always aim to express vulnerability and a keen sense of emotional intelligence through my work, while challenging hegemonic systems of power and oppressive ideals. I believe art is inherently political.

Rose Butch: We aim to challenge and employ the conventions of drag as a medium, using elements of lip sync, dance, poetry, visual art, physical theatre and spoken word to explore narratives of queer, trans and non-binary experience. Thematically, we work a lot with relational dynamics, intimacy, and nostalgia, queering and reclaiming memories. Currently, our mission is to provide the world with some much-needed queer escapism and catharsis.

PM: I think our biggest mission is to be seen and heard — loudly at that. We want to force-feed our audiences pure queerness and make them question every construct they may have about what they "think drag looks like." Drag is such a beautiful thing, but there isn't just one way to do it. Drag can cross mediums such as poetry, theatre, dance, live music...The Darlings aim to not be stagnant and never be comfortable, and continually push and express what it is to be non-binary in many different avenues.

The Darlings recently faced censorship from Facebook due to a live performance they deemed "inappropriate." Can you tell me a bit about that and how you feel about it now?

Rose Butch: We totally thought that we'd really toned down our content to make it Facebook-friendly the first time around, so when we were flagged and taken down for "inappropriate content" during our Quarantine II show after we'd deliberately tried to check every box we could think of, it was so frustrating.

At a time when there was so much uncertainty around queer community spaces and loss of opportunity as performing artists, having even a digital platform pulled out from under us was disappointing to say the least. We released a video addressing the censorship, and took a step back from self-producing online content as a collective for the time being. Looking back at it now seems like so long ago, even though it's literally been three months. Honestly, it's hard not to see the censorship as targeting a group mostly made up of queer and trans POC — if it had been a group of artists with a different set of privileges, would they have been met with the same response?

PM: Being virtual has posed many challenges. It really made us converse and talk about why queerness is censored. We weren't breaking rules, and we made sure that our content could be viewed by all generations. The fact that our show was taken down felt quite homophobic to say the least. People make it hard on artists — not just queer artists — to showcase anything out of the normal. What we do is uncomfortable, and people see that as being wrong. Queerness is often seen as being wrong. But, if you have a brain inside that head, you should be able to see that art is art, queer or not. In blocking our voices, it made us re-route and re-imagine how to work over quarantine, and how to overcome these obstacles. Art will not stop being made, and it just challenged us to continue making it. Look at us now! Unstoppable.

What can we expect from the performance at the Queer Arts Festival?

PM: You can expect a whole lot of non-binary energy! We hope to take the viewers on a rollercoaster with this show. We paired up with Queer Based Media, and all I can say is the footage is hot. Hopefully you will shed a tear, laugh, and feel emotionally exhausted at the end of the hour!

Rose Butch: This has been the first time we've worked on a show in person since February, and the fact that one of our members (me) is physically distancing within the group has played into the creation process, so that's something that you may pick up on. The QAF have also provided us with ASL interpretation, and we've been excited to collaborate on a show that's more accessible to everyone. You can expect fantasy, lots of big feelings, and, in the spirit of Pride, some good old-fashioned resistance.

Maiden China: This is the largest project the four of us have ever worked on. Coming out of the restricted circumstances of the initial phases of quarantine that led us to create Quarantine I & II, we are all so thrilled to be back in a physical space together and pushing our boundaries with regard to our form. Rose, PM, and Continental blow me away every time they perform, and this Queer Arts Festival film is a testament to their creative excellence.

Where do you want to take The Darlings into the future?

PM: I would love for The Darlings [to be] on ice or in outer space. That would be ideal. But for now, I think we want to really work as a collective on creating great content, and hit as many stages as we can. I (personally) would love more opportunities to tour with this amazing group of individuals. They are my best friends, and whenever we get out of the city it feels like what we are doing is stretching farther then our limbs can here in Vancouver. Touring makes what you do feel so impactful.

Rose Butch: Hopefully back to performing for live audiences as soon as it's safe to do so. And then, the world???

Maiden China: Stages across the world. On a major streaming platform. At film and theatre festivals abroad. I want The Darlings to be household.

These interviews have been edited and condensed for clarity. Watch The Darlings' virtual performance at the Queer Arts Festival this Friday, July 24 and 7pm PT here.

CBC Arts understands that this is an incredibly difficult time for artists and arts organizations across this country. We will do our best to provide valuable information, share inspiring stories of communities rising up and make us all feel as (virtually) connected as possible as we get through this together. If there's something you think we should be talking about, let us know by emailing us at cbcarts@cbc.ca. See more of our COVID-related coverage here.