What was it like for Zacharias Kunuk to try and make 'Atanarjuat' in 2001? 'Almost impossible'

"Atanarjuat: The Fast Runner" ended up opening doors for Indigenous filmmakers, and the award-winning director joins this weekend's episode of The Filmmakers.

Thankfully, 'The Fast Runner' ended up opening plenty of doors for Indigenous filmmakers 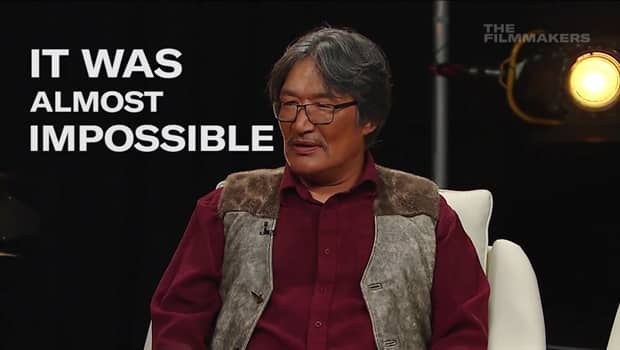 'It was almost impossible': Zacharias Kunuk on funding The Fast Runner

3 years ago
0:51
The award-winning filmmaker stops by this weekend's episode of The Filmmakers, which is all about "Atanarjuat." 0:51

"It was almost impossible to make a film if you're Aboriginal," Zacharias Kunuk says of the time when he was trying to get his 2001 film Atanarjuat: The Fast Runner made. "And that's what we ran into. We never knew that this existed. That if you had a bright idea, anybody could propose for funding and get funding and do it. And at that time, it was not like that — probably for a long time. And we changed that."

Kunuk ended up challenging the prioritizing of English and French-language productions over Indigenous language productions by Telefilm Canada. He made Atanarjuat entirely in the Inuktitut language — a first for a Canadian feature film — after successfully arguing to the National Film Board of Canada's documentary-only funding system that because the film documented Inuit mythology, it was similar to a documentary. A budget of nearly $2 million was approved, and the rest is history.

Atanarjuat: The Fast Runner became a huge commercial and critical success story, opening doors for Indigenous filmmakers and winning tons of awards along the way. And now it's making its way to this weekend's episode of The Filmmakers, which you can catch a preview of in the above the video.

Watch The Filmmakers this Saturday at 8:30 p.m. (9 NT) on CBC Television, or stream it at cbc.ca/watch. After the episode, stick around to see this week's feature presentation, Atanarjuat (The Fast Runner).​