Reflecting on 'Rebelle': Perspectives on the harrowing, Oscar-nominated tale of child soldiers

In this clip from the latest episode of The Filmmakers, experts share their takes on Kim Nguyen's 2012 movie 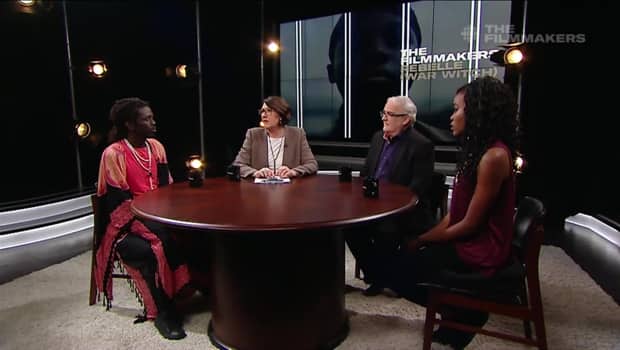 Reflections on 'Rebelle': Looking back on Kim Nguyen's saga of child soldiers

"I saw this movie for the first time, and I was just quiet for a bit because some of the clips were almost like flashbacks to situations that I was in."

Those are the words of musician and activist — and a former child soldier himself — Emmanuel Jal after watching Kim Nguyen's Rebelle (War Witch). In the above video, his words set the tone for a fascinating discussion about the film alongside writer and actor Rachel Mutombo and film critic Marc-André Lussier in the clip from the latest episode of CBC Arts' film talk show The Filmmakers (which you can watch in its entirety, along with the film itself, here).

Lussier spoke to the film's importance in the canon of Quebec cinema, which before that had tended to focus on stories within the province.

"It was the first time that a Quebecois director did a movie about something else with no relations whatsoever to Quebec," Lussier says. "An African movie with African people — and behind the cameras, a Quebec crew."

But that notion also raised issues of cultural appropriation amidst the panelists. Mutombo, whose parents and siblings immigrated to Canada from the Democractic Republic of the Congo, questioned whose right it was to tell the story of Rebelle.

"First of all, when it comes to cultural appropriation, I think there's an importance of responsibility of the person who decides to tell the story," she says. "In this particular case, the crew behind the camera was from Quebec. And that means that the lens through which we're watching that movie is through the lens — I think — of Canadian or Quebecois privilege. And that's not the story that we're seeing."

"I say everybody has a story and when we share our experiences for social and emotional learning, we are able to put a spotlight in a dark place," he says. "For a story like this [to be told] it created an opportunity to communicate."

Watch the latest episode of The Filmmakers this Saturday at 8:30pm (9pm NT) on CBC Television or online at cbc.ca/watch.