What happens beyond the happily ever after? Paper Year begins where most rom-coms end

Rebecca Addelman draws from her own personal experience as a comedy writer and early divorcee in her 2018 film.

Your typical rom-com usually finishes with a marriage and a standard happily-ever-after ending. But filmmaker Rebecca Addelman turned that formula on its head for her "anti-rom-com" Paper Year.

The movie begins with its two central characters, Franny (Eve Hewson) and Dan (Avan Jogia), impulsively deciding to get married. But their passionate relationship begins to go awry when Franny starts a new job as a writer for a ridiculous reality show — and she soon begins to take a romantic interest in her coworker.

Watch a clip from Rebecca Addelman's interview on The Filmmakers: 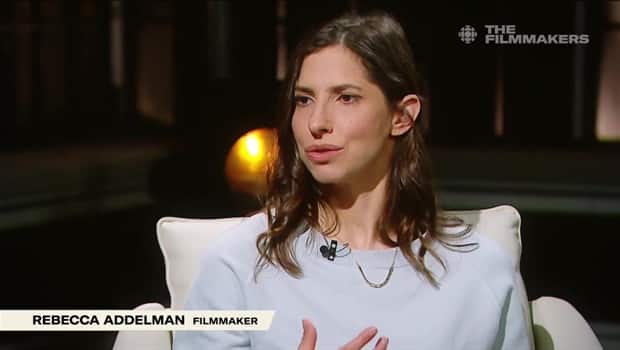 This film takes an honest look at young romance

3 years agoVideo
1:08
Rebecca Addelman describes how her film 'Paper Year' came from her perspective as a young woman. 1:08

For her first feature film, Addelman drew from personal experiences she had as a young comedy writer for series such as New Girl and Love. Just like Franny, she was married — and divorced — at a young age while she navigated the challenges of being the only woman in the writer's room.

In her interview with The Filmmakers co-host Johanna Schneller, Addelman describes how Paper Year can be interpreted as a letter to her younger self — and shares some advice for women going through the same struggles as Franny.

"Just because a really significant [relationship] ends doesn't make it less meaningful," says Addelman. "It's just part of your path."

Paper Year takes an refreshingly honest look about sexuality, fantasy and romance from a young woman's point of view. Franny experiences the exhilaration, heartbreak and disappointment during her romantic encounters throughout the film.

"I felt it was important to show sex the way I remembered it in my 20s," explains Addelman. "Sometimes it was fantastic...and there were a lot of experiences that weren't like that."

Watch the whole film and check out the full interview and panel discussion about Paper Year this week on The Filmmakers.