'The Sweet Hereafter': Looking back at one of Canada's most celebrated films, 20 years later

The contemporary classic kicks off The Filmmakers, CBC Arts' new Saturday night at the movies — but before it does, some experts weigh in on its cinematic impact.

The contemporary classic kicks off The Filmmakers, CBC Arts' new Saturday night at the movies 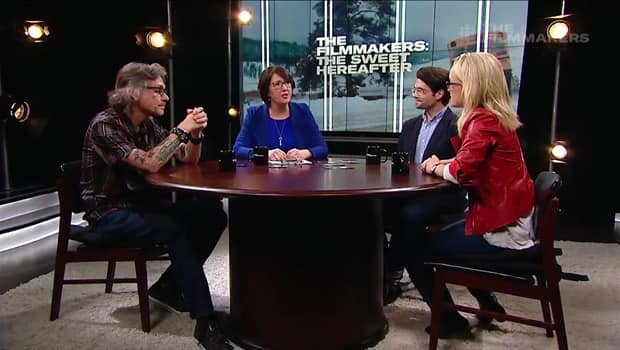 4 years agoVideo
5:38
Film programmer and critic Adam Cook, film critic and author Geoff Pevere and filmmaker and actress Stephanie Morgenstern all join us on The Filmmakers to discuss the contemporary classic. 5:38

This is the first in a series of essays by panellists featured on the new CBC Arts talk show The Filmmakers. A panellist from each episode writes about the film being featured this week, which this week is film programmer and critic Adam Cook discussing Atom Egoyan's The Sweet Hereafter. You can watch Cook alongside film critic and author Geoff Pevere and filmmaker and actress Stephanie Morgenstern in the above video, and watch the entire episode this Saturday at 8:30pm (9pm NT) on CBC Television or online at cbc.ca/watch.

In 1997, The Sweet Hereafter found Canadian auteur Atom Egoyan at his most creatively inspired. On the heels of his excellent psychological erotic drama Exotica, he had already been playing with elements of storytelling: shifting scenes out of linear order, withholding narrative details, using ellipses, telling a story in a way in which it unlocks in its final passage in a climactic reveal, changing the viewer's perception of what had come before. This filmmaking virtuosity is not merely for show, but drastically alters how the viewer experiences the story. Used to emotional ends, it creates a sustained mood and effect. New details at key moments debunk previous assumptions and shroud things in ambiguity. This is a film that provides no easy answers.

The movies tells the story of a city lawyer, Mitchell Stephens (Ian Holm), who comes to a small town following a tragic school bus incident to help the townspeople get compensation for their devastating loss. It was based on a book by Russell Banks inspired by a real incident in 1989 in Texas. Egoyan's adaptation makes considerable changes to the source material, altering the setting to Sam Dent, B.C. The biggest addition is that of a parallel narrative of The Pied Piper of Hamelin, told as a bedtime story within the film by Sarah Polley's character, Nicole — a piece of commentary within the film on the possibly false catharsis Stephens offers the grieving parents. Indeed, Egoyan sees the ill-fitting nature of lawful justice with such a tragedy as irrelevant to the characters' trauma. Moreover, as we learn more about Stephens, we see that he is working through his own emotional trauma with his drug-addicted daughter. Manipulatively playing on the parents' emotions, Stephens recruits them two by two. Meanwhile, flash-backs and flash-forwards fills us in piece-by-piece about his history with his daughter.

Stephens is not the only character in The Sweet Hereafter to act out vengeance for his own problems through another avenue. Nicole, whose relationship with her father darkly crosses sexual boundaries, will find a way to express herself in a self-motivated gesture with far-ranging consequences. But for all the characters' damaged psychologies and questionable behaviour as emotional opportunists, Egoyan does not exact judgment on them. While Bruce Greenwood's Billy Ansel is the one parent to stand up to Stephens, Egoyan's empathy is equally placed in each person. Sometimes, tragedies just occur, and no one is to blame. People will act how they will act; there is only trauma and its endurance. The characters in The Sweet Hereafter are united by their weaknesses and their pain, and Egoyan creates a fascinating tapestry of psychological portraits.

Ultimately, this is a film of two tragedies. There's the bus accident, but there's also the tragedy of how in times of emotional turmoil, there is only so much we are capable of doing for each other — and there is a great discrepancy between what we want to offer and can. In the great tradition of penetrating the human condition, each scene furthers our understanding of each character's motivations. Egoyan is masterful at orchestrating an ensemble, like a great conductor, and what really makes The Sweet Hereafter an almost sublime masterwork is the symphony of feeling from the cast. As intricately written and crafted the film is, it's the intangible qualities, the strangeness and the ambiguities, that make it timeless. Deeply humanist, the film refuses to sensationalize the tragedy and its structure makes you feel its weight from each character's perspective. The prevailing empathy for everyone and their harmonizing sorrow does what cinema does best, allowing us to see ourselves in the work and in those around us — and to feel closer to strangers.

Tune in to The Filmmakers every Saturday at 8:30pm (9pm NT) on CBC Television, followed by the presentation of that week's feature film. Or stream both online at cbc.ca/watch.