It was the end of the world as he knew it: Looking back at Don McKellar's 'Last Night'

The latest episode of The Filmmakers takes on the 1998 apocalypse film, which is also widely considered the ultimate "Toronto movie." 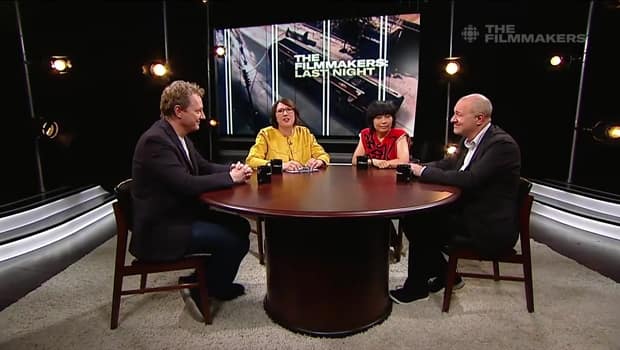 It was the end of the world as he knew it: Looking back at Don McKellar's Last Night

This is part of a series of essays by panellists featured on the new CBC Arts talk show The Filmmakers. A panellist from each episode writes about the film being featured this week, which this week is film critic Norm Wilner discussing Don McKellar's Last Night. You can watch Wilner alongside CBC's own Sook-Yin Lee and writer and actor Bob Martin in the above video, and watch the entire episode this Saturday at 9pm (9:30pm NT) on CBC Television or online at cbc.ca/watch.

It's December 31, 1999, and the end of the world is a foregone conclusion. Something's happened to the sun, and we're all going to die at midnight. You can't do anything about it — so what do you do until then?

That's the premise of Don McKellar's Last Night, which takes place in Toronto over the six hours leading up to whatever it is that's coming. The movie, which marked McKellar's feature directorial debut after more than a decade of screenwriting and acting (and a few shorts of his own), arrived in the same year as Deep Impact and Armageddon.

In the shadow of those gargantuan Hollywood studio affairs, which rained down state-of-the-art digital destruction on their all-star casts, Last Night was gently mocked for its modest budget and identifiably Canadian earnestness. And on one level, that's par for the course — even now, two decades later, Canadian cinema is still being underestimated on the global stage.

But it's still strange to think that this sweet-natured, clear-eyed look at the extinction of humanity was mocked for not being urgent enough, as if those other movies were painting a more convincing version of the world's end. Last Night doesn't have big scenes of military commanders in situation rooms; by the time the movie opens, everyone's already cycled through shock and despair and action. All the big speeches have been delivered, and the inspirational acts have failed. It's over, everyone knows it, and here we are. What would you do?

Two decades later, "What would you do?" feels like the defining question of McKellar's career; so much of his work for film and television is profoundly interested in what happens when people are presented with ostensibly low-stakes choices. And yes, one can argue that such is the nature of all dramatic conflict, but McKellar's characters face decisions that are deceptively modest: a choice to learn to drive in Roadkill, a choice to smuggle drugs in Highway 61, a choice to play the piano, made over and over again, in Thirty Two Short Films About Glenn Gould.

With Last Night,  McKellar's  unspoken question develops a new urgency: what would you do? There's only so much time left. But of course, that's the question we should always be asking ourselves.- Norm Wilner, film critic

By the time he made Last Night, the choice was even simpler: keep going or give up. Patrick, the character McKellar plays in the film, intends to kill himself before the apocalypse — to own his death rather than share the same fate as the rest of humanity. But Patrick is missing something that his creator fully understands: it doesn't matter. Everything is ending, and Patrick's just focusing on his goal to avoid confronting how meaningless it all is. And since literally every character in the film is doing exactly the same thing — focusing on one pointless project or another — Patrick is no different from any of them.

But then Patrick meets Sandra (played by Sandra Oh), and things change. Patrick's been sleepwalking through his last day on earth, but Sandra is wide awake, her final hours derailed by the mob that destroyed her car and spoiled her plans for a quiet last meal. Sandra sees the despair and fear that Patrick doesn't; he's feeling sorry for himself, not the world. They choose not to desert each other. And in the last hours of their lives, that gives them...well, maybe not hope, but something like comfort.

There are other characters in Last Night, played by an impressive cast that includes Sarah Polley, Callum Keith Rennie, Arsinée Khanjian, Geneviève Bujold, David Cronenberg, Jackie Burroughs and McKellar's late partner, Tracy Wright. (In hindsight, this movie was as much an all-star film as its big-budget contemporaries — we just didn't know it at the time.) Patrick and Sandra are the film's leads, but McKellar makes sure we see everyone around them as individuals with their own dashed hopes and shattered goals. To the end, they're all making their own choices. And everything matters.

With Last Night, McKellar's unspoken question develops a new urgency: what would you do? There's only so much time left. But of course, that's the question we should always be asking ourselves.

That's why I keep coming back to Last Night instead of Deep Impact or Armageddon or any other effects-driven world-ender. What McKellar lacks in budget, he makes up in insight. It's a profoundly human apocalypse. As I wrote in NOW a few years ago, when we put Last Night at the top of our list of best Toronto movies, it understands that the world might be ending, but it doesn't have to end badly. There's something like comfort in that, too.

Norman Wilner is the senior film writer for NOW Magazine and the host of the podcast Someone Else’s Movie. He lives in Toronto with his wife and their terrible dog.