This weekend's The Filmmakers panel delves deep into the acclaimed director and his debut "J'ai Tué Ma Mère (I Killed My Mother)".

This weekend's The Filmmakers panel delves deep into the acclaimed director 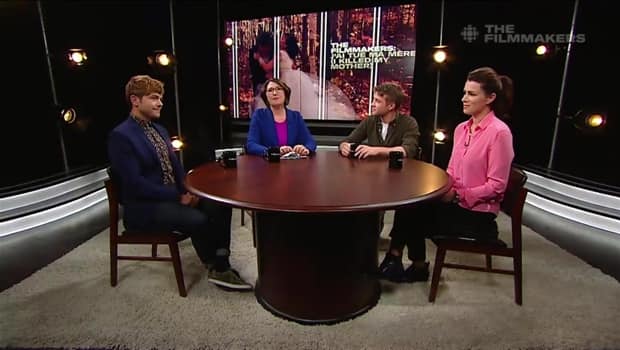 3 years agoVideo
6:41
This weekend's The Filmmakers panel delves deep into Dolan and his first film, J'ai Tué Ma Mère (I Killed My Mother). 6:41

While Xavier Dolan himself is the headliner on this weekend's episode of The Filmmakers, it also includes a lively panel with three Dolanian experts: actor and filmmaker Connor Jessup, Toronto International Film Festival programmer Magali Simard and CBC Arts' own Peter Knegt, who has been chronicling Dolan's career since it began in 2009.

Sitting down with host Johanna Schneller, the above video previews the panel, in which Jessup, Simard and Knegt consider the legacy Dolan has already made for himself at the ripe old age of 28 — and how it all began with J'ai Tué Ma Mère (I Killed My Mother).

"He was immediately, clearly very passionate as a person, onscreen and in his writing and directing," Simard remembers of Dolan's arrival on the film scene as a 20-year-old back in 2009.

Jessup was just 12 when J'ai Tué Ma Mère was released.

"I was an actor at that point but I hadn't really done anything," he says. "And I got into acting because I loved movies. But there's no market for a 12-year-old director...or a 12-year-old cinematographer or a 12-year-old production designer. So acting seemed to me to be the only path, and the path from that to directing seemed like quite a long one."

But Dolan changed the game for Jessup.

Jessup isn't alone in that influence. Knegt adds that Dolan likely was a large reason why a lot of people — especially young queer men — decided to get into film.

"He became an icon almost instantly," Knegt says, recalling when J'ai Tué Ma Mère came out. "And he still is now, eight years later. There's a generation of young queer filmmakers who became filmmakers themselves because of Xavier."

If you still haven't seen J'ai Tué Ma Mère, it will air this Saturday night after The Filmmakers, and the panelists certainly endorsed your potential viewership.

"I feel like it captures a moment for a certain generation," Knegt says. "The dialogue is incredible, Anne Dorval's performance [as the titular mother] is incredible...It's such a lovely, entertaining, moving, funny film."

Watch Xavier Dolan on The Filmmakers this Saturday at 8:30 p.m. (9 NT) on CBC Television, or stream it at cbc.ca/watch. After the episode, stick around to see this week's feature presentation, Dolan's directorial debut J'ai Tué Ma Mère (I Killed My Mother).​