How do you make art about a culture you've never experienced?

The animation team behind Window Horses had never been to Iran. How did they get it right?

The animation team behind Window Horses had never been to Iran. How did they get it right?

Ann Marie Fleming's animated film Window Horses follows the journey of Rosie Ming, a young Chinese-Canadian poet who departs her sheltered home to travel across the world to perform at a poetry festival in Shiraz, Iran.

The lead designer for Window Horses, Kevin Landgale, did lots of research before setting out to re-create the essence of Iranian culture rather than simply replicating its locations. "We had a number of Iranian supporters [to] give us awareness of the culture," he says in the panel discussion from this week's episode of The Filmmakers. 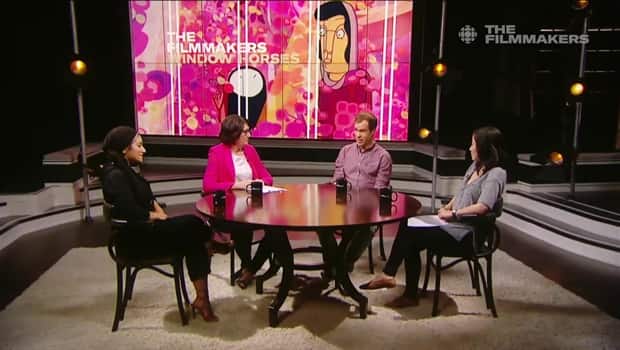 Langdale had never been to Iran before; his team faced the challenge of animating a place and culture they've never experienced. They decided to tackle it from Rosie Ming's perspective — from the eyes of a visitor experiencing the country for the first time.

Director Ann Marie Fleming explains what it was like to create the film from the same perspective as a Canadian filmmaker. Rosie Ming is modelled after Fleming's stick figure alter-ego Stickgirl. "I wanted to insert myself in the story...and discover the world as my character was discovering it," says Fleming.

Iranian-American actor Omid Abtahi had a special message for the director after working on Window Horses. "It's so important for me to tell these stories that shed positive lights on our culture," says Abtahi. "I'm so used to playing terrorists that I jumped at the chance to be apart of this project."

When she first saw the film at TIFF, Iranian poet Nasim Asgari says it was clear that research had gone into the film. She appreciates that Window Horses authentically portrays Iran's culture from an outsider's point of view, without ignoring the politics involved.

A lot of people solely focus on the...negatives without focusing on this rich culture and history that [Iran] has.- Nasim Asgari

The film premiered in the U.S. a few days after President Donald Trump announced a travel ban affecting several Muslim countries. "There's so much negativity out there," says Fleming. "I really wanted to show what was beautiful."

Stream the film and check out the interview and panel discussion about Ann Marie Fleming's film Window Horses in the full episode of The Filmmakers.