'Grab hold of the one life we are given': How the film 'Double Happiness' can inspire better living

This week on The Filmmakers, revisit Mina Shum's 1994 film and its celebration of authenticity and honest storytelling.

This week on The Filmmakers, revisit Mina Shum's 1994 celebration of authenticity 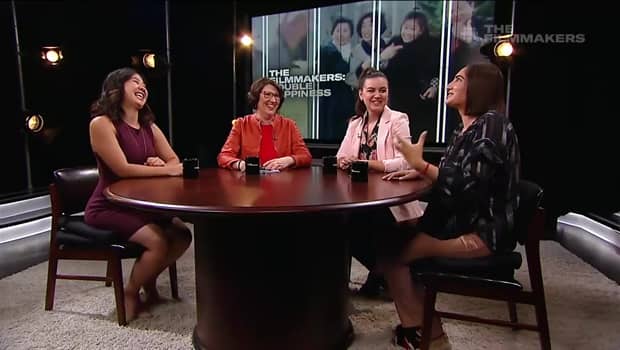 This is part of a series of essays by panellists featured on the new CBC Arts talk show The Filmmakers. A panellist from each episode writes about the film being featured this week, which this week is actor Samantha Wan discussing Mina Shum's Double Happiness. You can watch Wan alongside VICE culture writer Amil Niazi and TIFF programmer and film critic Kiva Reardon in the above video, and watch the entire episode this Saturday at 8:30pm (9pm NT) on CBC Television or online at cbc.ca/watch.

Jade tears through the night. Chased by neither criminal nor terrible monster, she is still running for her life. Arms agape, she embodies complete abandon. It is a turning point of Double Happiness: the moment when Jade (played by Sandra Oh) resolves to no longer be suffocated by her family and society.

Director Mina Shum remembers directing the scene in great detail: two trucks driving alongside Oh — a production assistant in one with a boom box blasting music, the other with a camera strapped down — capturing the performance. While Oh runs, Shum coaches, "You are totally alone. You were born alone. You will die alone..." The phrasing is grim, but it is used to invoke the importance of a responsibility we have to ourselves — the responsibility to make the most out of the single life we have. Director and actor finish the scene in tears together. It is one of the most liberating scenes you will ever experience in cinema.

Double Happiness is a semi-autobiographical film by Mina Shum about a Chinese-Canadian woman struggling with the expectations of her family and her dreams of being an actor. Shum is the first Chinese-Canadian women to direct a feature film with a wide release, and the film gained critical acclaim, winning awards in festivals including Toronto and Berlin as well as two Genies. As a Chinese-Canadian actor and filmmaker, more than 20 years after its release, I find myself facing the same struggles Shum depicted in her film. However, it's not because the story relates to my race or gender that I find it a captivating film — it is the main character's universal fight to live authentically grips me.

The world needs more honest stories told from unique perspectives like Double Happiness. Both the film and its creation story inspire us to tear free of our confines and grab hold of the one life we are given.- Samantha Wan, actor

The meaning of "authenticity" can be obscure — so, for the purpose of this essay, "authenticity" means living by one's own principles. Throughout the film, Jade buries her genuine self for fear of the ramifications. As she endeavours to follow her own principles, other characters reveal that they are also suppressing their true selves. For example, when a family friend from abroad comes to visit Jade's father, Jade is instructed by her parents to refrain from saying she is an actor. Her father fears Jade's artistic aspirations will ruin the picture of success he's been boasting about to his friend — but she later learns that this same family friend has been constructing a facade of his own. Shum has brilliantly created honest portrayals of a complex existence. No easy solution is offered and the audience empathizes with the characters' plight — so when Jade finally resolves to break free from the expectations of her family and society, it is a heroic feat that audiences can aspire to.

The authentic place Double Happiness comes from is another reason it's so affecting to an audience. Mina described to me her process of writing what she affectionately refers to as the "throw up" draft that would be used for her submission to the CFC program: three days of non-stop writing, sustaining herself on peanut butter and jelly sandwiches. Although the majority of this script would later be rewritten, Shum stands by the practice of beginning by writing as much as possible and then sifting through to discover what rings true. The CFC heard her distinctive voice in her work — and her submission was accepted.

When I asked Shum how she was able to maintain her vision for the film throughout the process, she offered a few practical techniques. One is something she discovered from her experience working in theatre: she writes monologues to explore the character's unfiltered thoughts and emotions. In fact, Jade's monologue that opens the film was developed from this exercise and remains almost completely unaltered from the first draft. She also suggests that if there's something you're questioning, get out of your head and listen to your body. Dance. Once you let go of your inhibitions, your gut may reveal the answer.

Shum's love of dance shines through in the joyful scene where Jade and her sister bust a move in their bedroom. When all other methods have failed, Shum suggests asking two questions that have acted as a guiding light to her over the years: is this decision based on fear — and will I regret this decision ten years from now? All these techniques serve as effective ways to nurture authentic creation. The world needs more honest stories told from unique perspectives like Double Happiness. Both the film and its creation story inspire us to tear free of our confines and grab hold of the one life we are given.

Watch The Filmmakers this Saturday at 8:30pm (9pm NT) on CBC Television or online at cbc.ca/watch, followed by Mina Shum's Double Happiness.