Radha Chaddah invited Amanda Parris to her Toronto studio to learn a bit about her art — and science.

My intellectual interest in biology ended in grade 11, and since then, I haven't thought very much about the trillions of cells that make up a human body. However, since meeting Toronto-based artist Radha Chaddah, cells have been front and centre in my mind. Cells and brain waves and electromagnetic energy. I haven't thought this much about biology since Bill Nye dominated my after-school hours.

Radha is a rare combination: she is both a light artist and a scientist. After going to school for a degree in film and art history, she went back for a master's in human biology. Her days are often spent working in a microscopy lab at the University of Toronto, and at night, she's creating art at her studio. That work varies in form, from photographic captures to larger-than-life public light installations that re-animate nature in magical ways. But just like her life, the content of each piece always exists at the intersection of science and art.

Last month, I went to visit Radha in her studio — a beautifully crafted and curated space in her backyard. 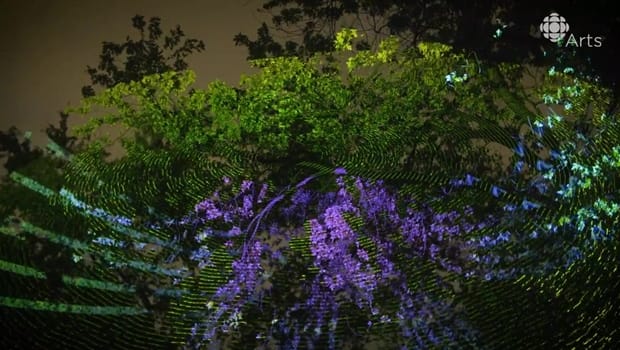 2 years ago
5:47
Amanda Parris visits the artist in her Toronto studio to learn more about her scientific art. 5:47

Framed images of her photographic work adorn the walls, but these captures of embryonic stem cells and human skin cells look nothing like the Pepto-Bismol pink illustrations that I remember from my high school textbooks. Rather, these images resemble something out of a sci-fi film: intricately threaded, densely populated and dazzlingly coloured.

Radha and I sat down to discuss her process (which required me to brush up on what I learned in Biology 101).

We began with the cells. While working in the lab, Radha stumbled onto what would eventually become her artistic process.

After growing cells, she stains them using fluorescent antibodies which helps the average layman (like myself) to see their internal skeleton. She then uses microscopy imaging to photograph the cells and transforms those photographs into large installations.

That work eventually led her to the brain — "a vast array of connecting cells," as Radha explains. "Electrical impulses travel along the outer surface of these cells from neighbour to neighbour, radiating out across an immense network." Using EEG headsets (the same kind Oprah's homie Deepak Chopra uses to track his meditations), an app and projectors, Radha is able to project brainwaves out into the world.

As you'll see in the video, I put on the Geordi La Forge-esque visor and my brainwaves can be seen cascading over the trees. It's pretty magical.

We also got a sneak peek at her work on electromagnetic waves which transformed her backyard into what looked like a space and time portal out of Doctor Who.

Radha's work feels so intimate yet otherworldly because it gives those of us who don't generally spend our days in labs a glimpse at the unseen worlds that live within.