See Jane and Finch through the eyes of a neighbourhood champion

If you try typing "Jane and Finch" into Google and then do the same for, say, "Leslieville," you'll see a curated tale of two Toronto neighbourhoods that could not be any more different.

Search "Jane and Finch," and in the first page of hits you'll turn up news stories about shootings. You'll also get a Quora question ("How dangerous is Jane and Finch?"), an academic article ("Crime, Coverage and Stereotypes") and this curious Urban Dictionary entry, which defines "Jane and Finch" as a place "known for its gun and drug crime."

This is Jane and Finch as defined by those who write about it, wonder about it, study it — and fear it. However, a new documentary shows us the neighbourhood through the eyes of someone who's loved the community for so long, he's been dubbed Mr. Jane and Finch.

Mr. Jane and Finch is also the name of the film, which premieres Friday, Feb. 22 on CBC Docs, and it follows 81-year-old community activist Winston LaRose as he runs for city council in the 2018 Toronto municipal election. As we see him knocking on doors, passing out flyers, discussing his platform with people in the street and helping residents at his office, we are invited to see this community through a new lens, one that is shaped by him.

The documentary is directed and produced by Ngardy Conteh George, co-produced by Alison Duke and edited by Sonia Godding Togobo, making Mr. Jane and Finch a rare unicorn in the Canadian film landscape: it's a film made almost entirely by Black women.

I spoke with Conteh George over the phone earlier this week, and in our conversation, she revealed how making the film changed her perspective on the city, and the political process. 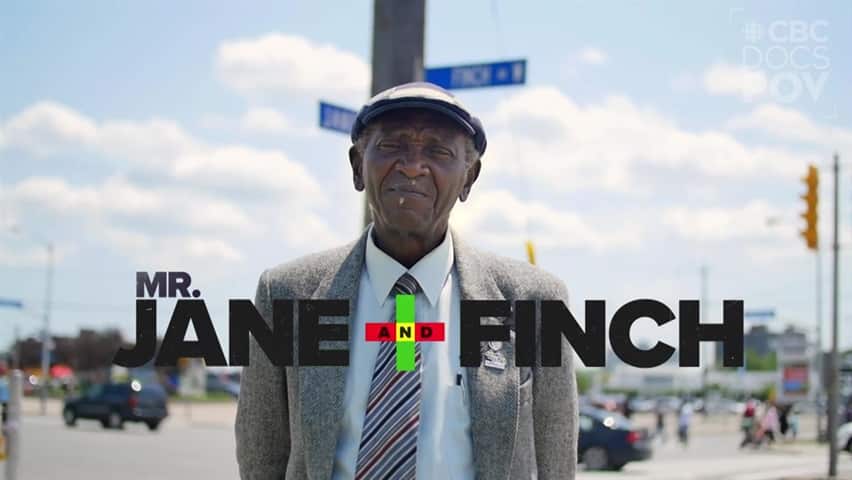 2 years ago
1:22
80-year-old Winston LaRose has been a community advocate in the Jane and Finch area for decades. He has helped countless people and now, he's running for Toronto City Council. 1:22

Amanda Parris: Why did you want to tell Winston LaRose's story?

Ngardy Conteh George: Well, originally our friend connected us because of Winston's archives. He has been documenting the Black community for years and I had just finished the short film on Dudley Laws where I used a lot of archive footage. I was drawn to [Winston's] archive and all the material he had and I thought that was where the film was going to go until he decided to run for office.

I didn't know the film was originally going to be about him as an archivist. What was it like going through those archives?

NCG: Oh, it was like a treasure hunt. He had this incredible wall of VHS tapes and I literally just like sat on a stool, started from the bottom and went to the top, tape by tape. He was very particular about identifying what was on every single tape: Lincoln Alexander, Jean Augustine, Louis Farrakhan. It was exciting.

Was it hard for Winston to transition from being the person behind the camera to being the subject of the film?

NCG: Yes and no. He was so used to interviewing people that I think he understood what it took. The hardest thing for him was to actually let go of his archives and trust us. We didn't roll intensely for over a year. I spent a lot of time with him before bringing the cameras. By the time the full crew and cameras came, he was already very comfortable. By that point, I had already started digitizing and working with his archive. Getting to that point was a bit tricky. No one else had possession of his original archive material outside of his eyes and he originally didn't even want that. He wanted to be present and to take back his footage at the end of every day. Letting go was a transition. I think once the trust was there, he was fine.

This municipal election was one of the most controversial in recent history. So much happened. Can you talk about how all the external things that were happening — ward changes, injunctions, controversial comments from other candidates —​ informed your filmmaking process?

NCG: Oh, well that just threw everything on its head. It was very much "run and gun," which keeps you on your toes. We really had to think: is that important to the story? Do we need this? How does this push the story forward? Is it too much detail? Between Doug Ford's decisions, the whole injunction process — and then all of Mammoliti's comments and then that other minister with the bullet proof vest — there's all these things which as a documentary filmmaker gives you this natural organic drama. But at the same time, it forced us to constantly rewrite the trajectory of the film. The focus of the film was Winston first. I had to follow him, and where he lies and what he does. I always took it back to Winston's eyes. That, to me, was always the jumping point.

How were all of these things affecting Winston?

NCG: He's just so cool and collected. Prior to his retirement he was a psychiatric nurse so he is someone who doesn't show very much emotion and is a little bit hard to read. But I felt like I kind of cracked the code through the process. His schedule was kind of up in the air, so a lot of things were spur of the moment or last minute. His whole campaign strategy had to be completely rewritten because of the combining of wards. It went from "I only have to go against three other people and campaign in a neighbourhood that knows me, that's familiar with me," to now there are communities he's not familiar with, they're not familiar with him, two incumbents and eight candidates. That completely changed everything for him and I think it was stressful.

You talked a little bit about the trust you had to build with Winston, and trust and investment seem to be big themes throughout the film. How did you get the trust to film some of those difficult campaign meetings?

NCG: I think it was from spending a lot of time with Winston. And because of the respect that he has from the community, and from everyone around him, he would just say, "She can film," and no one else could say anything else, really. For the campaign team, that was a point of friction. I just let them know what my intentions were [for] the filming of these moments, and he trusted me, so he was happy to have me there with the camera. There were moments where they didn't want filming to happen. And I respected that.

So much news reporting is divorced from historical context, but you include Winston discussing not only his personal history, but also that of the neighbourhood and how it was designed to become so densely populated. Why was that important for you to include?

NCG: It's so easy to say that a neighbourhood is troubled, a neighbourhood is stigmatized. But I just really wanted to show the genesis of that and to show that it didn't come from the people. It was external forces that created this community, almost to fail. A community [can] easily have inherent problems because of the way it was designed. I felt it was important to show that it's the people that suffer as a result of the design. It's easy for people to blame it on other things.

How did making this film impact your own perspective on the neighbourhood?

NCG: I heard all this negative talk growing up about the community and many other communities in Toronto. I always knew that perception and reality were two different things. And that's what I saw being there.

And how did making this film impact your perspective on the electoral system?

NCG: Oh, wow. It's completely changed my perspective. I'm someone who votes and I have my opinions, but that's as far as I have really been involved in any political process. I have a new understanding and appreciation. I see the value of being a part of the election process and how important it is to support candidates. I think it's important especially for our community to [see] how important it is for people in our community to run and how difficult it is for people in our community to run. We have this great democracy, but to see what it takes to actually win, it's not a very democratic process. I had a bigger belief in the system and in the process and I see how unfair it is. It's not an equal democratic system that we have, and there are flaws that really need work.

You've made a couple of movies now about different individuals in our community who work with and for our communities. Why are these films important for you to make?

NCG: To counter the whole white saviour narrative that we constantly have going on in the greater media landscape. We're not helpless as a community. We have answers within our community. We have people who are working hard in our community all the time. I feel like those stories aren't always shown. And so those are the kind of stories that I'm drawn to and want to tell.