As his alter ego Buffalo Boy, Adrian Stimson reclaims what was taken from Indigenous people

The two-spirit Blackfoot artist channels the energy of the slaughtered plains buffalo into art.

"Everything about the bison was used in our physical life and also our spiritual life."

As Buffalo Boy — a parody of Buffalo Bill — two-spirit Blackfoot artist Adrian Stimpson challenges colonialism with sly, fierce humour. A residential school survivor, Stimson lives on Siksika Nation in Alberta on the former gardens of the Old Sun residential school. Through his performance as Buffalo Boy, Stimson reaches out to grab the energy of the slaughter of the plains buffalo, mirroring his historic cultural history.

In this clip from In the Making, he discusses the role of the bison in his work and the impact of their slaughter on the Plains Tribes.

Watch the clip from In the Making: 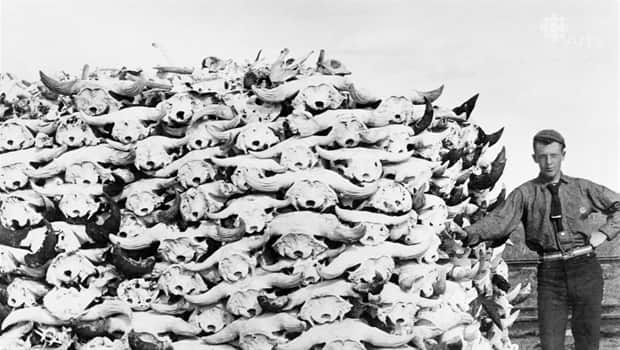 "It was part of the Canadian government's plan to clear the plains of not only animals but people. Especially [for] the plains tribes who all relied on the bison, it was the surest and the quickest way to get rid of us — to starve us out."

Stimson sees his work as Buffalo Boy as part of this lineage of connection with the buffalo, saying the art feeds him. "The fact is I'm no different than my ancestors. I still live as a result of the buffalo."

In the Making is an immersive journey inside the creative process. The documentary series follows host Sean O'Neill across the country and around the world alongside some of Canada's leading artists as they bring new work to life and face pivotal moments of risk and reward. All eight episodes are available to stream online now, with individual episodes broadcasting weekly each Friday at 8:30pm (9pm NT) on CBC.

Each episode follows an artist from across the creative spectrum — visual art, film, music, dance, theatre — with a unique approach to art-making and something to say about the world. Sean visits artists at home, in studio, backstage, and in the field, giving viewers rare access to intimate creative spaces and inspiring moments of realization.

Stream every episode of In the Making now, or watch episodes weekly Fridays at 8:30pm (9pm NT) on CBC TV.