Insurgence/Resurgence is one of Canada's largest exhibits of Indigenous art ever — and it's reclaiming space for a community often shut out of the art world.

Over the past month, CBC Arts and CBC Indigenous have collaborated to bring you stories — and even a special episode of CBC Arts: Exhibitionists — from Insurgence/Resurgence, a groundbreaking exhibit featuring the work of 29 Indigenous artists, on now at the Winnipeg Art Gallery.

CBC Arts's Amanda Parris sat down with the curators of the exhibit, Jaimie Isaac and Julie Nagam, to talk about how Indigenous art has traditionally been represented in galleries and museums, and what makes Insurgence/Resurgence different. 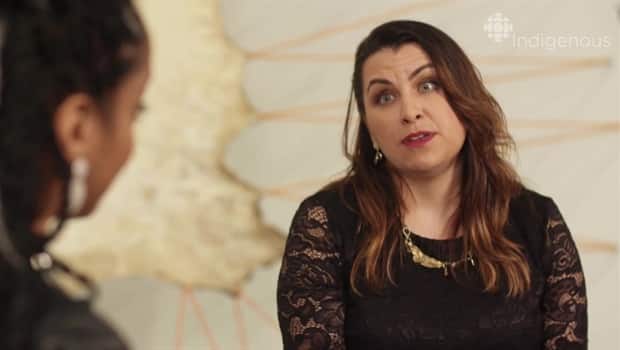 For Isaac and Nagam, the exhibit holds deep personal significance.

"I think a lot about the inspiration and the future generations that will come after us and why it's important that it's our voice and our self-determining acts as curators," says Nagam.

"Having a perspective or a filter of Indigenous background for curating is to also think about that history of how Indigenous art has been misrepresented or not [represented] at all," adds Isaac. "We also stand on the shoulders of many artists and curators of Indigenous heritage working before us and really creating a space for us in these institutions now."

As curators, Isaac and Nagam say they want to reclaim the land upon which the gallery is situated as Native space — space that documents a renaissance of Indigenous art that is affirmative and forward-thinking. The focus is on hope, self-determination, renewal and re-imagining what the country could be.

When people talk about Indigenous people having to get over this past, they're really asking them to get over ongoing injustices and ongoing racism.-  Jaimie Isaac

"There's a societal shift — we need that to happen," says Nagam. "That needs to happen with Indigenous people, newcomers, refugees, settlers — everybody that is thinking about their relationship to this specific place, how they've come here, how they want to relate to it, how institutions perpetuate certain narratives or don't, what kind of histories are being told."

They also reflect on opening the exhibit amidst Canada 150 and conversations about reconciliation — and how their responses to the show have shifted following the verdicts in the deaths of Colten Boushie and Tina Fontaine.

"When people talk about Indigenous people having to get over this past, they're really asking them to get over ongoing injustices and ongoing racism," says Isaac.

See some of the art featured in Insurgence/Resurgence below and click through to watch the full videos with each artist!

This series of videos profiling the artists featured in Insurgence/Resurgence is a collaboration between CBC Arts and CBC Indigenous.