For this artist — a self-described hermit — it's about enjoying his own work, not making money

Attila Richard Lukacs is an established painter, but he prefers to surround himself with his favourite pieces for inspiration rather than sell them. 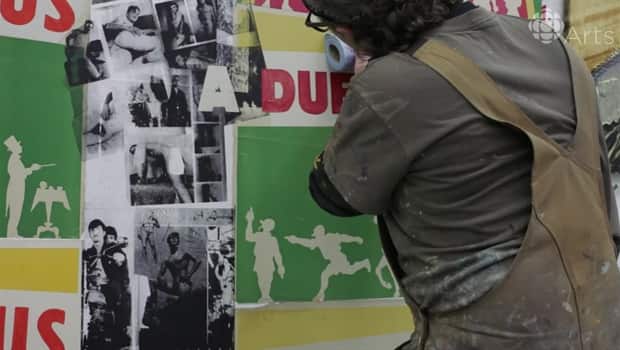 For this artist — a self-described hermit — it's about enjoying his own work, not making money

4 years agoVideo
1:00
Attila Richard Lukacs is an established painter, but he prefers to surround himself with his favourite pieces for inspiration rather than sell them. 1:00

Attila Richard Lukacs famously combines reverence and irreverence in his large-scale paintings. Lukacs graduated from Vancouver's Emily Carr College of Art and Design in 1985 and a year later moved to West Berlin, where he would stay for a decade and make his name.

Part of a group of artists known in the 1980s as the Young Romantics, Lukacs used the lauded chiaroscuro of Caravaggio and the flattened planes and gold leaf of symbolist painters like Gustav Klimt to create startling works depicting homosocial and often blatantly homoerotic scenes. The skinheads of 1980s West Germany were of particular interest to him, who used the men of this subculture as his studio models.

But despite being an established figure in the art scene, Lukacs prefers to surround himself with his favourite pieces for inspiration rather than sell them. Although we visit him in his studio in this video, he generally doesn't take too many studio visits because he'd rather people not offer to buy his pieces.

The studio for me is not a place of commerce — it's the works that I want to have around me and influence me.- Attila Richard Lukacs, painter

Lukacs moved to New York in 1996 and to Hawaii in 2001, eventually resettling in Vancouver, where he currently lives. Later series, exhibited extensively and internationally, have depicted primates and flora, while even more recent works have veered into abstraction and installation. A 2008 exhibition, accompanied by a monograph, displayed several Polaroids which Lukacs took of his studio models in Berlin and New York — a body of work stored and catalogued by artist Michael Morris.

Lukacs' work has been collected by the National Gallery of Canada, the ArtGallery of Ontario and the Vancouver Art Gallery, among other institutions.

Art Minute is a new CBC Arts series taking you inside the minds of Canadian artists to hear what makes them tick and the ideas behind their work.