With haunting photos and elaborate costumes, Meryl McMaster shows us the deep history of the land

She's using art to learn about her own Cree heritage — and through sharing that learning, she hopes she can teach Canadians something, too.

She's using art to learn about her own Cree heritage — and she hopes she can teach Canadians something, too

For her new series of photographs, artist Meryl McMaster has been at work to build an elongated costume — one like a column, covered in spheres made from emergency blankets, the kind that look like foil. She's been building a headpiece to go with it, and she's going to shoot the photos somewhere a little further from Ottawa, where she's based — maybe the Scarborough Bluffs.

It's all part of an exhibition she has coming up at Ryerson University during the Scotiabank CONTACT Photography Festival in May. Both the costumes and the locations have been part of her learning about her own heritage as a person from a mixed cultural background (McMaster is Plains Cree as well as British and Dutch). And she hopes that in sharing that learning through her photography, she can teach Canadians something too. 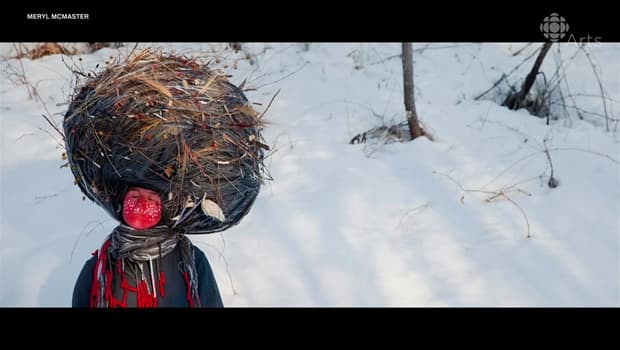 2 years ago
3:40
Artist Meryl McMaster roams the Ottawa landscape as she tells you how her photographs connect to history, her own Indigenous identity and childlike wonder. Filmmaker: Nicholas Castel 3:40

In this video made by filmmaker Nicholas Castel and featuring music by Freddy Kwon, you'll meet McMaster at work in the studio and out in the woods, where she spends a lot of time reflecting and learning. She draws on the knowledge of community elders to gain a better understanding of the history and meaning of sites in Canada where she takes her photographs. And the resulting dreamy images also speak of her love of the outdoors.

"There's always this kind of childlike wonder, I feel like, that I've carried throughout my life," she says. "I think I'm trying to pull on my own heartstrings when I'm taking my images, like I'm trying to bring out those personal emotions that I feel when I'm just on my own or with people — bring out that soul within the plants or the trees."

Ultimately, McMaster hopes that her viewers will both get a little lost in the landscape themselves and begin to understand that the land we walk on has a long Indigenous history. As she explains: "We have to be engaged and you have to learn as a part of that act of reconciliation. I can help Canadians or new immigrants to this country learn about our stories and learn about the history before they were even here."

You can see "From here to there (then and now)" by Meryl McMaster until March at the Portage Bridge Tunnel in Ottawa, in "Confluence" at Glenbow Museum in Calgary, February 2-June 2 or as part of "Manif d'art 9 - The Quebec City Biennial" in Quebec City, from February 14-April 21. And of course, she'll be part of CONTACT at Ryerson Image Centre, May 1-August 4.