Why Marc Adornato is painting ruined landscapes and mass shootings

Adornato isn't just playing around with heavy subject matter - he's trying to start a conversation and, maybe, make a difference.

"I find that if something is serious and heavy and not going away... I kind of want to start exploring it."

Marc Adornato's paintings are pretty in your face, at least if you're looking closely. A bucolic landscape has a shipwreck in its background and a couple of Hazmat-suited men walking toward you. What looks like a simplified version of Raphael's School of Athens is littered with bodies instead of philosophers. A cherub hovers in the sky double-fisting automatic weapons, against a backdrop of military planes.

These are all confrontational images, not least because (other than the cherub) they're all pretty recognizable types of scenes, if you've been subjecting yourself to the news at all. 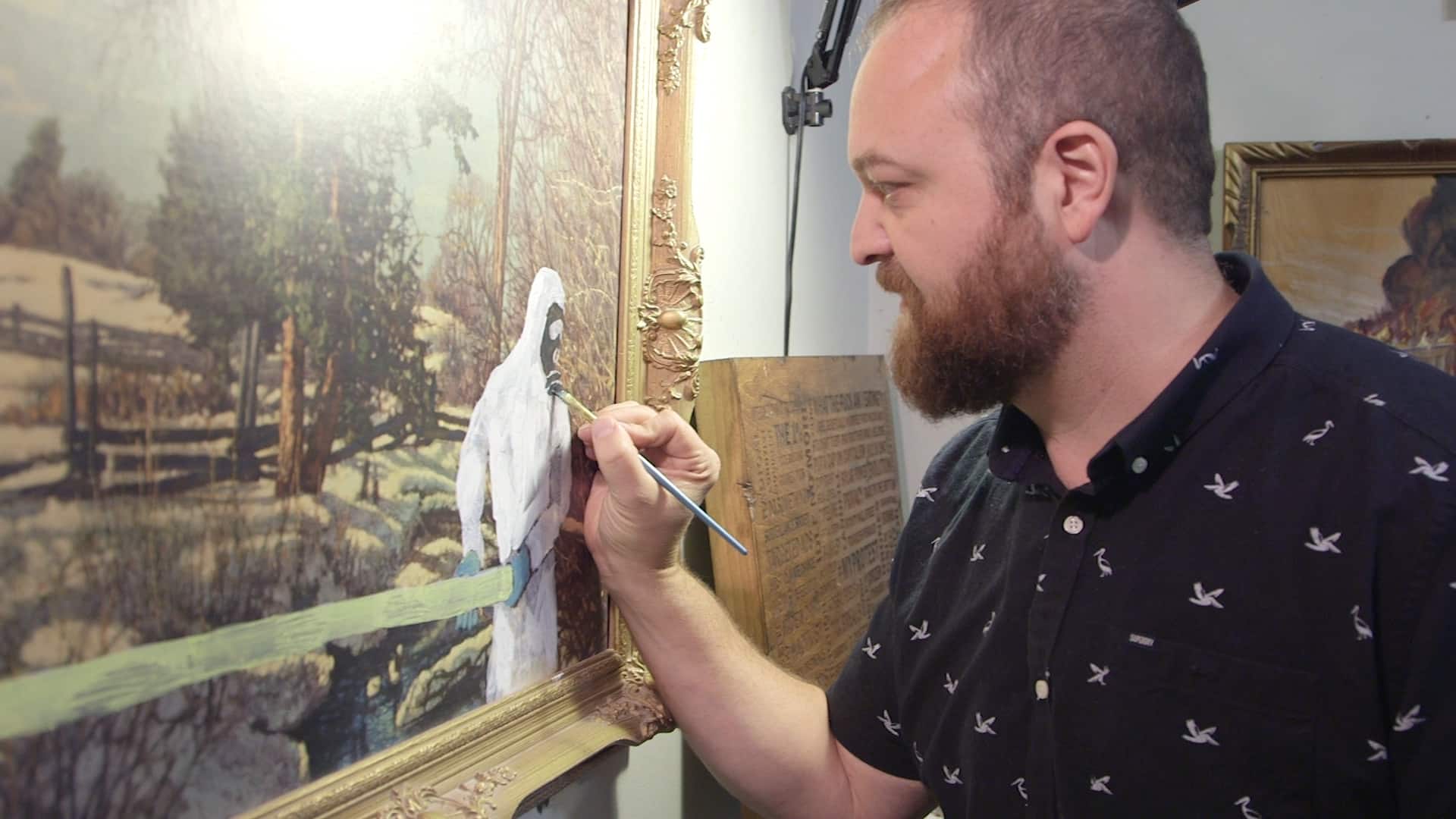 2 years ago
5:06
Adornato is a self-described artist. satirist and agitator, and he's explaining how his work satisfies all three descriptions. 5:06

Maybe that's why Ottawa-based Adornato calls himself a satirist and agitator as well as an artist. He uses his work to point at some of the ills befalling society, and he hopes that it wakes his viewers up. He says, "I find that if something is serious and heavy and not going away, then that's when I kind of want to start exploring it as an art piece." And while he understands that some of his viewers have reacted negatively to his subject matter, he does feel an obligation to paint them.

It's kind of navigating how far down the humour side I can take a serious issue, and it is something I really do struggle with because there's people's lives that are getting snuffed away- Marc Adornato

"Every now and then, I probably push the button a little too much and it upsets a few people. So it's kind of navigating how far down the humour side I can take a serious issue, and it is something I really do struggle with because there's people's lives that are getting snuffed away in some of these paintings and there's nothing funny about that at all. But then, we also have to talk about how this is happening again and again, and often, and we can correct these problems. We can correct the gun culture. We can hopefully one day ban and eliminate weapons that would hurt people."

So, as you'll see in this video made by Maya Annik, these are paintings with a social conscience. Adornato plans on continuing to make them, both for himself and for his audience. He ends, "I'm making artwork for the public and population around me. That's definitely an important factor – thinking about who my audience is and where my artwork's going to be seen."

Follow Adornato here. And keep checking his website for news about a fall show. Between now and then, he's taking a two-month-long art history research trip to Europe.