Brian Leitch has built the world's largest graffiti sculpture and made Drake a custom ping pong table — and now he's on a KWEST to bring TRUTH to Nuit Blanche. 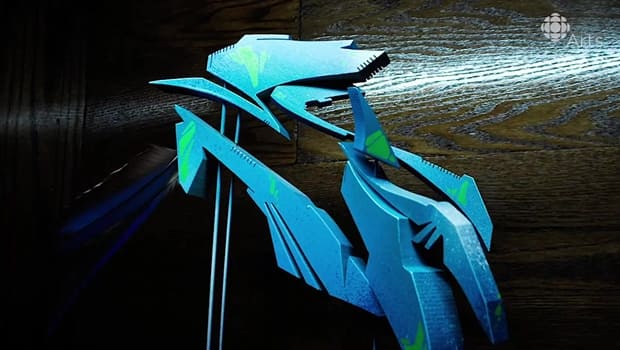 This Toronto artists is taking graffiti sculptures to the next level

He's built the largest graffiti sculpture in the world, cut apart Michael Jordan shoes to make a winged sculpture and he even built Drake a custom ping pong table — but you likely don't know his name. Brian Leitch, better known as KWEST, has been a multimedia artist and graffiti sculptor producing art installations and custom projects for over two decades.

Born in Toronto, Brian was adopted two days after birth. His new family introduced him to a world of architecture and woodworking, essentially teaching him how to move an idea from a conceptual drawing on a sheet of paper to a fully-formed three dimensional object.

As he got older, his journey to find himself led him to travel North America on trains, adopting his KWEST alias and leaving his tags along the way. Inspired by objects he would encounter in different cities, he began to experiment with weathered textiles ranging from wood and rail ties, to his most recent piece which incorporates discarded clothing.

Partnering with H&M, Brian is creating one of the most meaningful pieces of his career for this year's Nuit Blanche in Toronto called TRUTH. A collaboration between Brian and OVO's Noah "40" Shebib, the piece promises to be an interactive multisensory experience. You can check out the final piece at Yonge and Dundas Square on the night of Saturday, September 30.

Watch Exhibitionists online or on Friday nights at 12:30am (1am NT) on CBC Television.