Indigenous and settler artists collaborated to tell the story of the last surviving member of the Beothuk people.

"It is challenging to talk about a people who have seemingly disappeared," says Yvette Nolan, librettist and co-director of Tapestry Opera and Opera on the Avalon's new co-production, Shanawdithit, starring Marion Newman in the title role. And with this opera, Nolan and her collaborators are breaking open the story of Shanawdithit that's been limited by textbook copy.

Who was Shanawdithit? She's believed to be the last of the Beothuk people, who once inhabited what we now call Newfoundland and Labrador. She died in 1829, but left drawings behind that tell the story of her people. Despite this, our understanding of the Beothuk people has weakened over time (though many believe that the bloodline of the Beothuk community lives on through intermarriages between the Mi'kmaq and Innu Nations). Colonialism has been responsible for us losing the story of Shanawdithit and the Beothuk — her tale has been told from a colonial perspective since she died. And it's the importance of reclaiming her story that has been driving Nolan and her Indigenous collaborators. 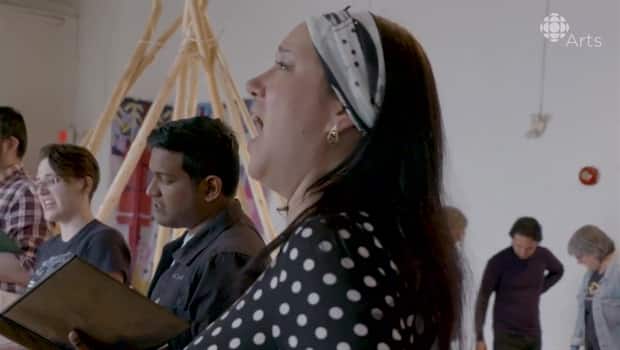 2 years ago
5:08
Yvette Nolan is sharing the often-misunderstood story of the Beothuk people in Tapestry Opera and Opera on the Avalon's new production. 5:08

In this video, Nolan offers context for the tradition of opera-like practices in Indigenous culture, where dancing, singing, performance and mask work (among other related arts) have been around for a very long time.

A key phrase in Shanawdithit is, "How can I sing to descendants I will never have?" For Nolan, the line is particularly significant. She explains, "She lived so long ago and I am here now and I am her artistic descendant. I am responding to her work and, in a way, I am her descendant."

In order to bring Shanawdithit's story to life, Nolan and composer Dean Burry brought on a team of other such "descendants": artists from different Indigenous groups across Canada, like choreographer Michelle Olson and visual artists Lori Blondeau, Jordan Bennett, Jerry Evans and Meagan Musseau.

Shanawdithit is on to May 25th at the Imperial Oil Opera Theatre in Toronto and on June 21st at St. John's Arts and Culture Centre in St. John's.