Huge works of art are standard fare at the Vancouver Biennale — the exhibition regularly includes large-scale sculpture that confronts the audience in big ways. But this year, the giant anvil that's been dropped in its midst by artist Maskull Lasserre (who you may have bumped into before at CBC Arts) might seem a little incongruous with its surroundings...until you get closer.

In this video by filmmaker Josephine Anderson, you'll meet Lasserre and his new work, Acoustic Anvil: A Small Weight to Forge the Sea, as he explains the thought process that went into its creation. 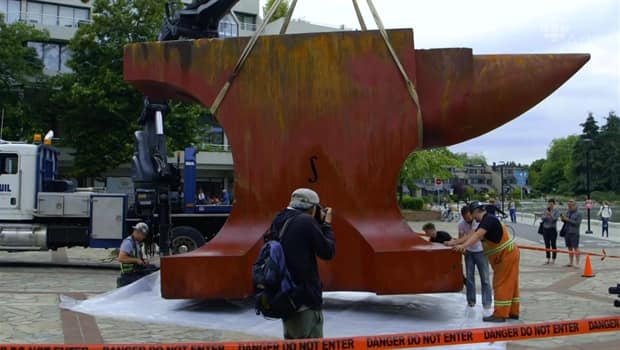 What's an anvil (besides being something cartoon characters drop on each other's heads or a Canadian metal band)? It's been an essential tool for thousands of years, used in metalworking and often shipbuilding. So when Lasserre decided on the form of an anvil for his offering to the Vancouver Biennale, setting a monumental version of the tool next to the boats off Vancouver's coast seemed apt.

But the artist has further complicated our notion of what an anvil is by not only blowing it up to epic proportions but cutting the F-holes you'd normally find on a violin into the steel tool's sides and sending the sounds of the ocean out through those openings. And the effect is magical — Lesserre notes, "It becomes a tool-turned-instrument where the sound of the sea inhabits its solid mass. Listening to the spiral opening recalls the wonder of turning a conch shell to one's ear — an invitation to come closer, to experience its scale in relation to the body, and to be rewarded with a secret to share."

The sculpture sits in Leg-In-Boot Square, originally part of the industrial core of Vancouver and a hub of boat-building and metal-forging. So although the connection between the anvil and its setting may at feel hard to fathom, it becomes a lot more clear once you begin to realize the artist's complicated reference to place, industry, history and sound — all built into this 13-foot-high, 9-foot-wide, 25-foot-long piece of steel.

You can find out more about Maskull Lasserre here. And as part of the Vancouver Biennale, throughout the summer Leg-In-Boot Square is playing host to black-and-white films from the industrial age, right next to Acoustic Anvil. Find upcoming dates and times here.